Aaron Rodgers had no objection when it came to quarantines designed to flatten the curve. However, when it comes to what seems like quarantines “until a cure is found,” the Green Bay signal-caller says the restrictions seem more like “house arrest.” 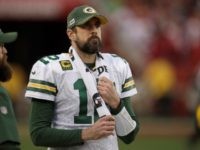 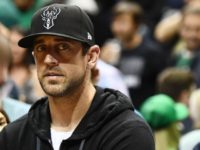 Fans in Chicago, Minnesota, and Detroit, got a special treat on Sunday night’s episode of Game of Thrones. Why, you ask? That’s because they got to see Daenerys’ dragon do what their defenses have mostly failed to do for over 10 years: Stop Packers quarterback Aaron Rodgers. 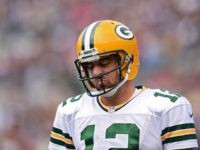 Just when you thought the story surrounding the exit of former Packers coach Mike McCarthy couldn’t get any more bizarre, it does. 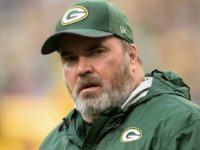 WATCH: Packers and Falcons Brawl After Hit on Aaron Rodgers

The Packers have fired their head coach and don’t seem to have a lot left to play for, but that doesn’t mean they don’t have a lot of fight left. 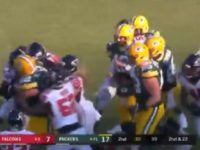 The Rodgers brothers feud seems to be still going strong after Jordan Rodgers, the brother of Packers quarterback Aaron Rodgers, blasted his brother for doing nothing to help his own mother during the California wildfires. 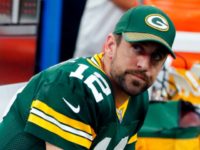 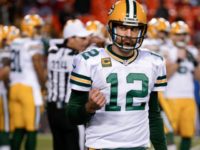 Report: Tom Brady Admitted That Aaron Rodgers Is Better than Him 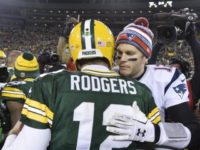 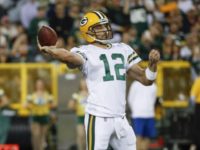 ESPN’s Torre on Aaron Rodgers: If Anyone Has ‘Diplomatic Immunity’ to Denounce Trump Anthem Criticism, It’s the White Quarterback

In response to Green Bay Packers quarterback Aaron Rodgers suggesting his NFL colleagues “ignore” President Donald Trump’s criticisms of the National Anthem, ESPN “High Noon” host Pablo Torre said Wednesday that if anyone has the “diplomatic immunity” to speak out 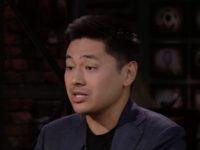 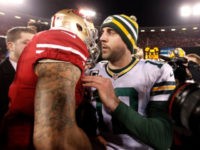 Race car driver Danica Patrick and Green Bay Packers quarterback Aaron Rodgers are kicking their relationship up a notch. However, Patrick’s father may not be happy about Rodgers’ political stances. 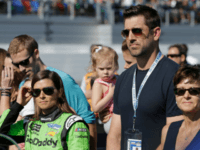 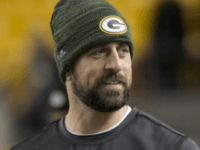 With all of the the subtleties and sensitivities of a pack of under-fed hyena’s, the sports media wasted no time lobbying the Green Bay Packers to sign Colin Kaepernick after Aaron Rodgers went down with a broken collarbone. 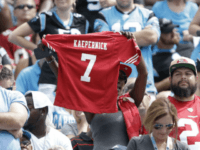 Packers: Rodgers Could Miss Rest of Season with Collarbone

MINNEAPOLIS (AP) — Green Bay Packers star quarterback Aaron Rodgers could miss the remainder of the season with a broken collarbone. 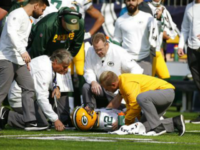 The Packers players wrote a long letter to their fans this week. A letter in which the team asked their fans to join them in interlocking arms during the anthem on Thursday night. According to quarterback Aaron Rodgers, this was a moment that stood for, “…equality.” As well as “…unity and love, and growing together as a society and starting a conversation around something that may be a little bit uncomfortable for people.” 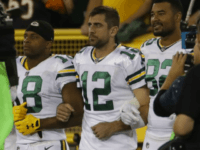 No Pack No! Aaron Rodgers Wants Packers Fans to Join Team in Linking Arms During the Anthem

Apparently no one is ever just going to show up and play football ever again. Coming on the heels of a major national survey, showing that fans do not approve of NFL players orchestrating anthem demonstrations. The Packers’ Aaron Rodgers has, you guessed it, asked fans to participate in anthem demonstrations.

Whitlock: If Aaron Rodgers Supported Kaepernick, He’d Get the Packers to Sign Him 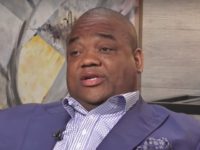 Aaron Rodgers Says Kaepernick Not on a Roster Due to Protests, Not His Play

In an interview with ESPN The Magazine, Packers quarterback Aaron Rodgers gave his opinion about why former NFL quarterback Colin Kaepernick, doesn’t have a job. According to Rodgers, Kaepernick’s unemployment has nothing to do with his ability to play football. 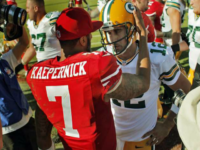 Despite the fact that Green Bay Packers quarterback Aaron Rodgers has dominated the Chicago Bears this season, the Chicago Tribune couldn’t seem to bring itself to mention his name in a tweet about his breakup with actress Olivia Munn. 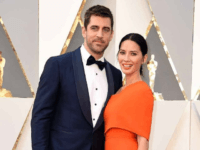 ARLINGTON, Texas (AP) — This time it was a catch, and another win for the Green Bay Packers. 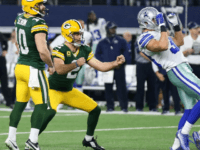 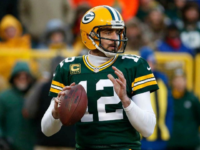 ESPN has taken a poll of 304 NFL players to find out the answers to such questions as who they would want on their team if they went to the Super Bowl, what rules are most consequential, and what players are most likely to win future Super Bowls.

The Green Bay Packers broke hearts. They broke banks, too. The team’s no-time-left-on-the-clock win put gamblers and bookies into the red from the black. The Lions entered the game as a 3.5-point underdog. But the Packers entered the second half

During the Thursday Night Football match-up between the Green Bay Packers and Detroit Lions, the Packers overcame a 17-0 first half deficit to win 27-23. How the Packers were able to pull it off was quite impressive, but also controversial. Green 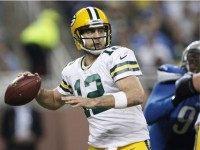 Green Bay Packers quarterback Aaron Rodgers played the position of ambassador of peace on Sunday, slamming a fan who used the moment of silence in honor of the victims of the Paris terrorist attacks to yell, “Muslims suck!”

NFL Preview: No More Debates for NBC, But a Heck of a Sunday Night Game 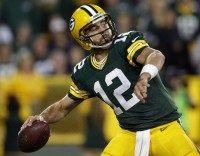 In his post-game interview after defeating the Seattle Seahawks during Sunday Night Football 27-17, Green Bay Packers star quarterback Aaron Rodgers took quite a shot at Seahawks star quarterback Russell Wilson, telling reporters, “And then getting help from God. I 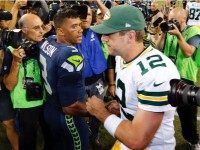