Breitbart Senior Editor MILO trended as the number one topic in the US on Twitter Thursday within an hour of the announcement of his upcoming book, Dangerous.

“See? I can dominate Twitter without even having an account,” MILO said in response to the news. 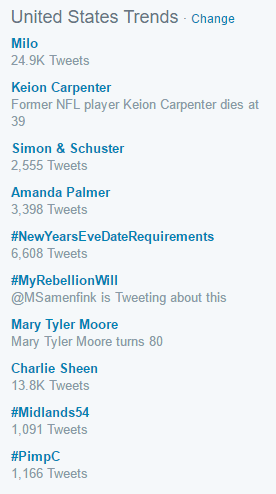 The Hollywood Reporter announced MILO’s upcoming book in an exclusive article, where they also revealed that he had already received a $250,000 advanced payment.

“Milo Yiannopoulos has parlayed his ban from Twitter  — and some controversial appearances on college campuses and cable TV shows — into a $250,000 book deal with Threshold Editions, an imprint of Simon & Schuster,” wrote the Hollywood Reporter on Thursday. “Threshold and Simon & Schuster were not available for comment, but people with knowledge of the situation say Yiannopoulos is getting an advance of $250,000 for his book. The autobiographical book is his first, though Yiannopoulos, a flamoboyant and gay conservative, has a wide following for his writing, especially at Breitbart News, where he is an editor.”

“They said banning me from Twitter would finish me off. Just as I predicted, the opposite has happened,” said MILO in a comment to the Hollywood Reporter. “Did it hurt Madonna being banned from MTV in the 1990s? Did all that negative press hurt Donald Trump’s chances of winning the election?”

“I met with top execs at Simon & Schuster earlier in the year and spent half an hour trying to shock them with lewd jokes and outrageous opinions,” he continued. “I thought they were going to have me escorted from the building — but instead they offered me a wheelbarrow full of money.”

“Every line of attack the forces of political correctness try on me fails pathetically,” MILO concluded. “I’m more powerful, more influential, and more fabulous than ever before and this book is the moement Milo goes mainstream. Social justice warriors should be scared — very scared.”

Simon and Schuster, the publisher for MILO’s upcoming book, was also trending as the third most popular topic in the U.S. at the time of this story’s publication.

Dangerous by Milo Yiannopoulos is currently available to pre-order in both ebook and hardback formats here.