NewsGuard, the browser extension that rates the “trustworthiness” of news outlets which is included by default in Microsoft’s mobile Edge browser, has removed the Daily Mail from its blacklist — which includes Breitbart News, WikiLeaks, and the Drudge Report. NewsGuard claims that with the “benefit” of the Daily Mail‘s “input,” it realized “we were wrong.” 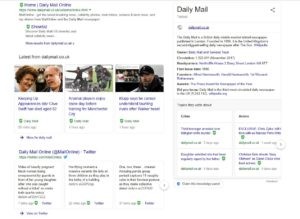 In a statement, NewsGuard declared, “This label now has the benefit of the dailymail.co.uk’s input and our view is that in some important respects their objections are right and we were wrong, which we think demonstrates the value of the transparency and accountability that imbues what we do.”

Following news that the Daily Mail was included in the blacklist, the newspaper proclaimed, “We have only very recently become aware of the Newsguard start-up and are in discussions with them to have this egregiously erroneous classification resolved as soon as possible.”

According to an alleged NewsGuard statement published by Nieman Lab, a Daily Mail executive “wrote NewsGuard a long, point by point letter,” following news of its inclusion in the blacklist, which ultimately led to a change of its rating.

“The senior Daily Mail news executive complained that we had overstated and relied too heavily on the number of complaints against the Daily Mail, MailOnline, and Mail on Sunday that had been verified by the Independent Press Standards Organisation (IPSO), and, in fact, that the newsrooms’ voluntary participation in IPSO’s process was evidence of its dedication to high standards,” the statement claimed. “After reflecting on his comments — and following discussions with some of the U.K.-based journalists whom we are consulting as we prepare to launch in the United Kingdom — we agree. We have changed this rating to green…”

Despite its removal from the blacklist, the Daily Mail has previously published fake news, including reports claiming a member of the Coast Guard and a White House intern had flashed a “white power” hand sign — basing the claims on a debunked hoax from trolls on 4chan. The Daily Mail also jumped on the mainstream media trend of attacking the Covington Catholic students, alleging students at the school heckled a black player on an opposing team while wearing “blackface,” a charge refuted by supporters and past students of the school.

Most mainstream outlets, even those with a record of publishing fake news, are rated as reliable sources of information.

NewsGuard has also rated stories which have been proven to be fake news as trustworthy, while rating the fact-checking articles of those news pieces as untrustworthy.

As reported by Breitbart News’ John Nolte, some fake news stories rated as trustworthy by NewsGuard include, “Rolling Stone’s 2014 hoax about a gang rape at the University of Virginia (UVA),” “BuzzFeed’s debunked lie about President Trump telling his then-personal attorney, Michael Cohen, to lie to Congress,” “The Washington Post’s debunked hoax about Russia hacking Vermont’s utility grid,” “The lie about first lady Melania Trump being an illegal alien,” and “The lie about Trump changing the name of Black History Month.”

Simultaneously, the Drudge Report’s scoop last week about the government re-opening was rated as untrustworthy — despite the Drudge Report being the first website to report on the breaking news.

NewsGuard’s board is packed with neoconservative figures and former U.S. intelligence operatives, most of whom are alumni from the administrations of George W. Bush, Bill Clinton, and Barack Obama.

One member of NewsGuard’s advisory board, General Michael Hayden, previously compared President Trump’s enforcement of U.S. border policy to the Holocaust, while another, Richard Stengel, was criticized for previously publishing “factual errors,” and “inaccurate statements.”

Jessica Levin, another member of the board, was called out in 2016 for engaging in unethical journalism after she wrote an article defending Facebook CEO Mark Zuckerberg without revealing her family’s close ties to the billionaire– who even reportedly attended her wedding.

One of NewsGuard’s top investors also reportedly “operates a D.C.-based subsidiary that has been trying to manipulate American news media on behalf of Saudi Arabia and its brutal military intervention in Yemen.”