Twitter has stated in ongoing communication with Breitbart News that naming the alleged Ukraine whistleblower, Eric Ciaramella, would not be a breach of its rules against posting “personally identifiable information.” But multiple accounts that have been suspended by the platform for posting Ciaramella’s name.

Breitbart News sent an inquiry to Twitter after reports of multiple accounts being suspended or forced to delete their tweets after naming Ciaramella as the alleged whistleblower.

The name has been mentioned: 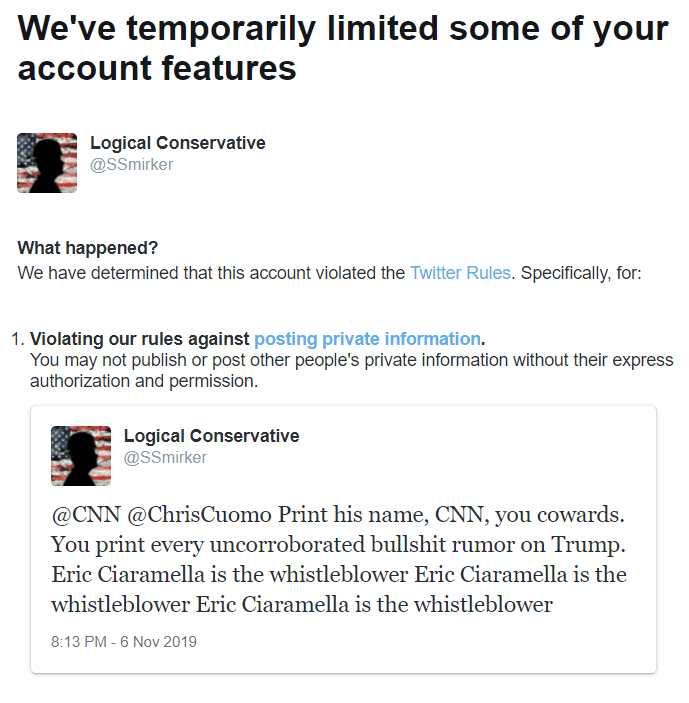 According to a Twitter spokeswoman, “per the private information policy, any Tweets that include personally identifiable information about any individual, including the alleged whistleblower, would be in violation of the Twitter Rules.”

A Twitter spokeswoman contacted Breitbart News after this article’s publication to clarify that posting the alleged whistleblower’s name is not a violation of its policies against personally identifiable information. However, screenshots from conservative Twitter users show that accounts posting Ciaramella’s name — and nothing else — have been suspended under the PII policy.

Twitter said it is looking into the cause of these suspensions.

If Twitter does indeed consider naming Ciaramella to be a violation of its rules, it appears to be having trouble enforcing them — numerous accounts, both verified and unverified, are still tweeting Ciaramella’s name.

Facebook also is blanket-banning references to the alleged whistleblower, including articles from Breitbart News and other publishers that have named him.

As Breitbart News reported earlier today, the alleged whistleblower’s name has been reported widely across both conservative and non-conservative media, and has been mentioned by numerous public figures.

It isn’t only conservatives reporting on Ciaramella. New York Magazine and HuffPost contributor Yashar Ali identified Ciaramella as the alleged whistleblower in a since-deleted tweet. Ali claimed to have confirmed the identity with three sources.

Facebook has said it may reverse its policy on naming the alleged whistleblower if enough media outlets and public figures mention his name, but it appears that the threshold – whatever it is – has not yet been met. Twitter, meanwhile, has offered no such assurances at all.

Update — This article has been updated based on additional communication with Twitter to clarify its policies.