“Loudoun County, Virginia, has been in the national news spotlight for several months,” said Loudon County mom Patti Menders at a rally on Wednesday, in a video posted to Twitter by 7 News I-Team’s Scott Taylor. “It all started when six of the school board members were in a private Facebook group, and one of them incited the mob to blacklist and go after parents.” 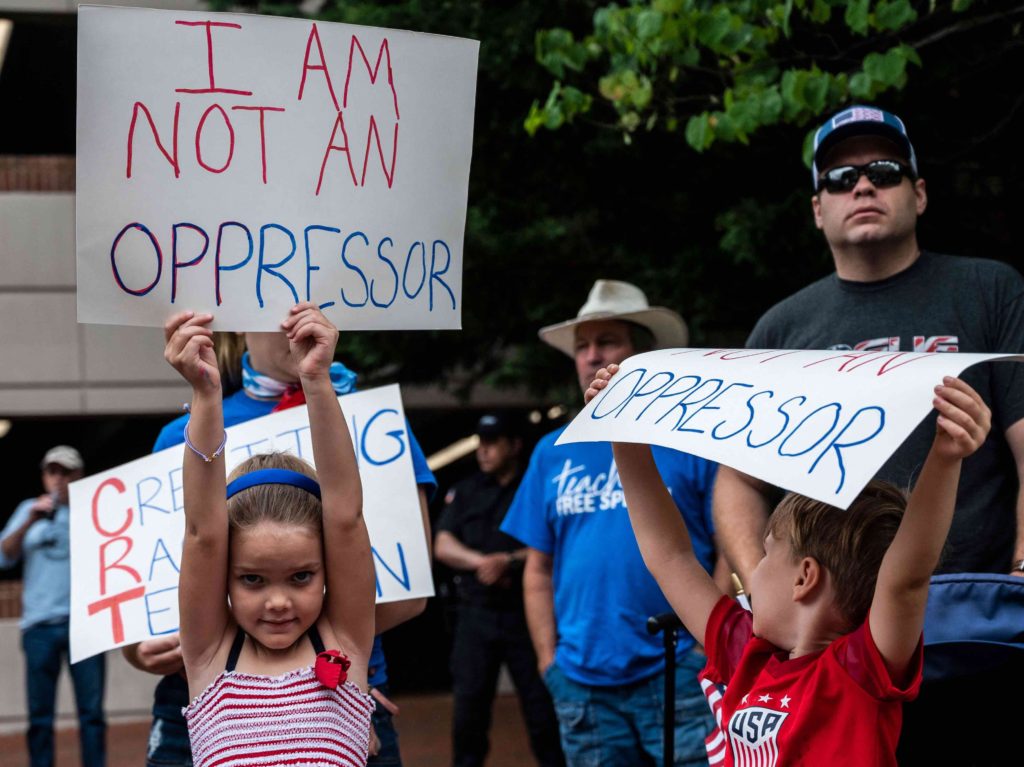 People hold up signs during a rally against “critical race theory” (CRT) being taught in schools at the Loudoun County Government center in Leesburg, Virginia on June 12, 2021. – “Are you ready to take back our schools?” Republican activist Patti Menders shouted at a rally opposing anti-racism teaching that critics like her say trains white children to see themselves as “oppressors.” “Yes!”, answered in unison the hundreds of demonstrators gathered this weekend near Washington to fight against “critical race theory,” the latest battleground of America’s ongoing culture wars. The term “critical race theory” defines a strand of thought that appeared in American law schools in the late 1970s and which looks at racism as a system, enabled by laws and institutions, rather than at the level of individual prejudices. But critics use it as a catch-all phrase that attacks teachers’ efforts to confront dark episodes in American history, including slavery and segregation, as well as to tackle racist stereotypes. (Photo by ANDREW CABALLERO-REYNOLDS / AFP)

“There were three pictures of me — my first and last name, my husband’s name, where my son goes to high school, what town I live in — they wanted to take postcards and mail them to my neighbors, calling me a racist,” Menders said. “They wanted to take a megaphone to our homes, and call us racist.”

Loudon County mom Patti Menders now speaking at @momsforamerica protest in front of @NSBAPublicEd HQ in Virginia. She along with other moms are upset over NSBA letter sent to President Biden that compared some parents actions with domestic terrorism. @7NewsDC @LCPSOfficial pic.twitter.com/5VLnugf6sJ

Another concerned Loudoun County mom, Xi Van Fleet, spoke during Wednesday’s rally, where she compared the NSBA to the Chinese Communist Party, stating, “Americans need to know that the communist infiltration in America is complete, especially in our educational system.”

“The National School Board Association offers us a fine example,” Van Fleet said. “When parents all over the country go to the school board and voice their outrage against CRT, what did NSBA do? They called the parents domestic terrorists.”

“The NSBA wants to keep our schools to use it to train our children to be social justice warriors and foot soldiers for the anti-America radical agenda,” Van Fleet affirmed.

Loudoun County mom Xi Van Fleet is blistering the @NSBAPublicEd in front of its HQ in Alexandria, VA. @momsforamerica is holding a protest about NSBA letter sent to President Biden asking the FBI to investigate parents at some School Districts. @7NewsDC @LCPSOfficial #Loudoun pic.twitter.com/rhy5u9gaq6

On Tuesday, two rallies were held outside LCPS’ headquarters — one group saying they were in support of teachers, and another group speaking out about the manner in which the two sexual assault cases were handled in the district — according to FOX 5 DC’s Lindsay Watts.

Other protesters are calling for Ziegler to resign.

2 rallies happening outside Loudoun Co School Headquarters. One group says they are here to support teachers & oppose division in the county. The other is here to speak out on the way 2 student sex assault cases were handled, w/ some calling for superintendent to resign. @fox5dc pic.twitter.com/4N5b0zRgXy

That same day, students at Loudoun County’s Broad Run High School held a walkout in support of sex assault victims in the school district and to demand safety.

Earlier this year, Loudoun County school board member Beth Barts was found to be part of a private Facebook group called, “Anti-Racist Parents of Loudoun County,” which had created and shared a list of parents who opposed CRT, according to the political action committee Fight for Schools, which launched a recall effort against Barts and five other board members.

“What did we do to incite this intimidation? We showed up to a school board meeting during public comments,” Menders explained.

Barts ended up announcing her resignation a few weeks ago, after LCPS superintendent Scott Ziegler admitted the school district “failed” to provide a safe environment for its students. Ziegler’s comments were in response to local parents outraged over how reports of two sexual assaults were handled inside schools.

“The school board has passed the transgender policy, which allows the opposite sex to use the bathroom,” Menders continued.

“A horrible sexual assault happened in May, and this school board and superintendent covered it up,” she added. “They placed the predator back into another school to sexually assault another girl.”

On Monday, a 14-year-old male student — who was arrested in connection to the case on two counts of forcible sodomy — was found guilty of all charges. Sentencing for the student will happen in November, but only after a Loudon County Judge determines the outcome of a second set of charges against the same student involving sexual battery at Broad Run High School.

While gender fluidity was not raised during the hearing, court documents confirm the male suspect was wearing a skirt when the assault took place in the girls’ bathroom.

Around the time of the sexual assault, LCPS was concerning itself with a policy that would give students who believe they are the opposite sex access to school facilities, groups, and sports teams of their biological counterparts.