Comparing George Wallace to Donald Trump is anti-science. That, however, did not stop Politico “reporter” Ben Schreckinger from exposing his shrill historical ignorance on the front pages of the left-wing Politico this morning. In a lead piece titled, “Donald Trump, Alabama and the Ghost of George Wallace,” Politico painfully avoided what some of us like to call The Obvious:

George Wallace was a Democrat.

Donald Trump is a Republican.

Motivated by racism, Democrat George Wallace broke the law to further the cause of racial separation, or segregation.

Trump wants to enforce immigration laws, which are federal laws.

This is my favorite line from Schreckinger’s desperately dumb race-bait:

The vast majority of supporters where white: of over 1,000 people waiting to enter on the east of the Ladd Peebles Stadium at 5 p.m., eight were black.

If you want to see some truly “cocaine white” crowds, check out a Bernie Sanders rally.

But if you’re truly interested in what “cocaine white” looks like, take a stroll through the Politico newsroom.

Politico also used using Trump’s concerns about anchor babies as an excuse to summon the “ghost of George Wallace.”

Apparently, Google is hard at Politico, because I saw the ghost of Harry Reid (D-NV):

Politico isn’t just wrong and desperate, the left-wing site is ignorant, and proudly so.

By the way, when this same Ben Schreckinger wrote about the crowds Bernie Sanders attracts — the same Bernie Sanders who’s in to rape fantasies, here’s how it looked — these stories are only 2 days apart: 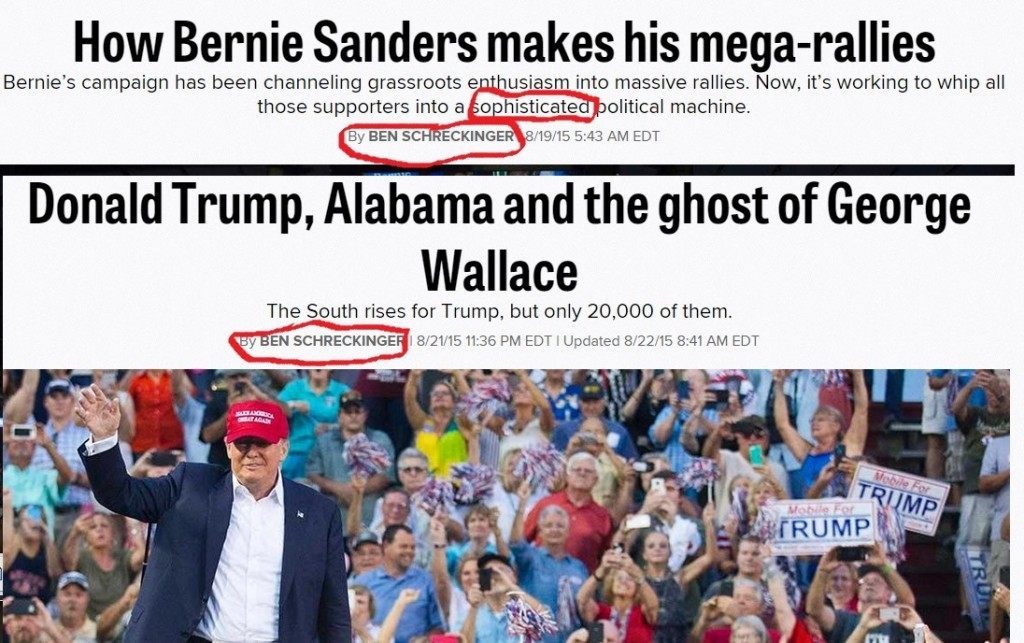