Our beloved elite media loves to fabricate a major freak-out over “rhetoric” whenever a Republican  says something they don’t approve of (like the truth). But when it comes to actual hate rhetoric and the kind of fear-mongering that could get someone hurt, no one is worse than the elite media. Case in point: Friday, on the front page of the New York Daily News, the NRA’s Wayne LaPierre is attacked in big red letters as a “TERRORIST.” 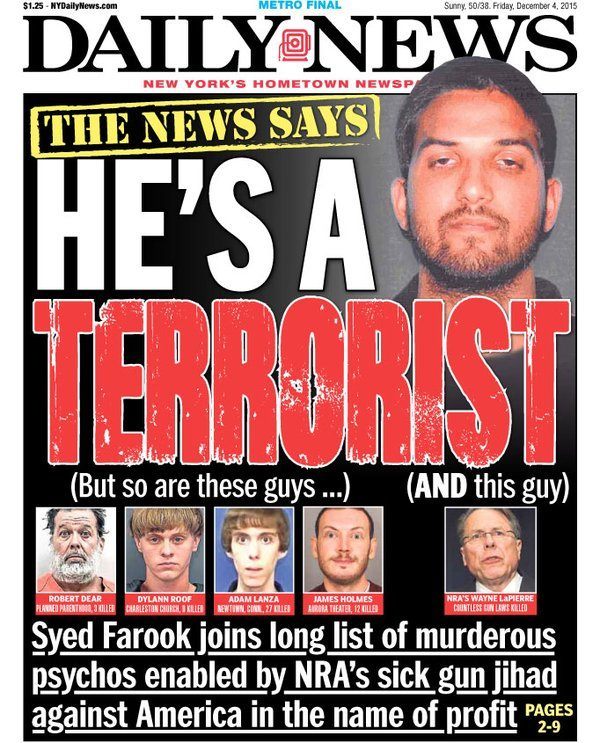 This is only the most recent example of the elite media spewing hate at those of us they disagree with.

As the media sees its influence wane in public opinion polls looking at guns, Syrian refugees, Donald Trump, ObamaCare, and Global Warming, their obvious frustration is bubbling over into outright rage.

Ten days ago, on no less than “Meet the Press,” much of the hour was spent comparing Republicans to Nazis.

Just because we’re concerned with the screening process for Syrian refugees that ISIS has promised to seed with terrorists, CNN’s Chris Cuomo is comparing a majority of everyday Americans to anti-Semites.

For the last two days, the elite media has been openly mocking the Faithful who offered their “thoughts and prayers” to the victims of Islamic terrorism in San Bernadino.

Finally, in the wake of last week’s Planned Parenthood terror attack, the media coordinated a blood libel by laying the blame for the attack at the feet of the pro-life movement.

In the midst of all this, the media is aggressively working to convince the government to disarm us. The gun control push is now wide-open and 24/7.

Between the media’s frustration, hate and ongoing assault on our Second Amendment civil rights…

I can’t think of a better time to purchase some firearms.