“The epidemic of malicious fake news and false propaganda that flooded social media over the past year — it’s now clear that so-called fake news can have real world consequences,” Clinton said. “This isn’t about politics or bipartisanship. Lives are at risk.”

Clinton called for Congress to pass legislation to stop it and for tech moguls in Silicon Valley to continue searching for a way to block it from entering readers’ Facebook and Twitter feeds.

“It’s a danger that must be addressed and addressed quickly,” Clinton said.

Yet Clinton is not an authority on fighting “fake news” — only an expert in spreading it. Here are some of the biggest whoppers she sold the American people during her ill-fated political career.

This one is a classic. In 2008, she said of her 1996 trip to Bosnia: “I remember landing under sniper fire. There was supposed to be some kind of a greeting ceremony at the airport, but instead we just ran with our heads down to get into the vehicles to get to our base.”

This whopper went down as the most memorable moment of her first doomed presidential campaign.

2. Her grandmother was an immigrant

In the first week of her second doomed presidential campaign, Clinton told an audience in Iowa that “I think if we were to just go around this room, there are a lot of immigrant stories. All my grandparents, you know, came over here and you know my grandfather went to work in lace mill in Scranton, Pennsylvania, and worked there until he retired at 65.”

Even the left-wing PolitiFact had to shut her down — with a caveat that “it’s possible that she misspoke” by getting 3 out of 4 birthplaces in the wrong hemisphere.

Clinton’s paternal grandfather, Hugh Rodham Sr., was born in England, but her three other grandparents were born in the United States.

Hugh Rodham’s wife, Hanna (also Hannah) Jones Rodham, was born in Scranton, Pa., to Welsh parents a couple years after they emigrated. Census, civil and military records show Clinton’s maternal grandparents, Della and Edwin Howell, were born in Illinois. (Della’s mother was the one great-grandparent born in the United States.)

3. A recruiter shut down her attempt to join the Marines because she was a woman

A longtime campaign trail anecdote finally died this year — the one Hillary has been telling since the ’90s about a sexist Marines recruiter:

“You’re too old, you can’t see and you’re a woman,” Mrs. Clinton said she was told, adding that the recruiter dismissed her by suggesting she try the Army. “Maybe the dogs would take you,” she recalled the recruiter saying.

Yet thanks to Wikileaks, we learned that she told a different story at a pricey paid speech in 2013:

Question from the audience: Is it true that until 1975 you applied for the Marines and they told you no because you were a female?

Hillary: No. Here is what did happen: It was actually — there was a recruiting station, and I thought, you know, maybe I should consider serving my country by joining the military. So I walked into the recruiting station, and the person on duty was a Marine. And I think I was 26, maybe 27, so, an older potential recruit. I said to the young Marine, I said, “Well, you know, I’d be interested in getting some information to see whether I could maybe serve. I’m a lawyer. Maybe I could help in some way.” He says, “Well, I think you are too old for the Marines but maybe the dogs will take you.” I said, “The dogs?” He goes, “Yeah, you know, the Army.” I said, “Well, it doesn’t sound like I’m going to be welcome so…”

4. The Benghazi attack was a protest against a YouTube video

Several family members of Benghazi victims say that Clinton told them privately that a random YouTube video about Mohammed, the author of the Quran, caused the deaths of their loved ones.

Clinton said this while standing in the same room as the caskets of the four slain Americans.

Patricia Smith and Charles Woods, parents of Sean Smith and Ty Woods, say Clinton told them just days after the attack that the government would arrest the video’s maker — and it did. (Talk about real-world consequences to fake news!)

Yet the very same week, Clinton told the Prime Minister of Egypt and her own daughter that the attack was terrorism. The day after the attack, she said, “We know the attack in Libya had nothing to do with the film. It was a planned attack – not a protest.”

5. She never sent or received classified email on her homebrew email server

Clinton could have faced serious legal trouble for sending and receiving all of her emails as Secretary of State from an unsecured server installed in her Chappaqua home, rather than the secured state.gov system. When the story claim to light, she claimed without any caveats that she never sent or received classified material

“I never sent or received any classified material.” — February 2016

FBI Director James Comey found Clinton’s excuses — and later modifications of them, as more information came to light — to be categorically false.

However, Comey shockingly declined to prosecute Clinton for transmitting classified material over the open Internet, claiming that she had no “intent” to break the law. Rep. Trey Gowdy later referred to Clinton’s debunked claims as “false exculpatory statements,” which prosecutors can use to argue that a defendant knows he or she is guilty.

6. Russia was behind Wikileaks’ release of John Podesta’s emails

At the third presidential debate, Clinton deflected from the content of her paid private speeches by attacking the source, Wikileaks. She said that the federal government had “confirmed” that Russian hackers planted the emails of Clinton’s campaign chairman John Podesta with the publisher and its editor-in-chief Julian Assange:

What’s really important about WikiLeaks is that the Russian government has engaged in espionage against Americans. They have hacked American websites, American accounts of private people, of institutions. Then they have given that information to WikiLeaks for the purpose of putting it on the Internet. This has come from the highest levels of the Russian government, clearly, from Putin himself, in an effort — as 17 of our intelligence agencies have confirmed — to influence our election.

Assange has denied that Russia provided Wikileaks with Podesta’s emails: “That’s false — we can say that the Russian government is not the source,” he told John Pilger in an interview at London’s Ecuadorian embassy.

Despite Assange’s plain denial, Clinton and the Obama administration have not produced evidence to prove the assertion.

At the time, Breitbart’s Joel Pollak argued that no one had proved anything — and Obama has previously provided fake information for political purposes:

The fact that the Obama administration has pointed the finger at Russia is not, as lawyers like to say, “dispositive.” The Centcom scandal showed that the Obama administration is fully prepared to alter intelligence — even battlefield reports — to deliver a politically convenient result. And there is nothing more convenient than to lay the embarrassment of Wikileaks at the feet of the Trump campaign.

What Clinton said was false and misleading. First of all, only two intelligence entities – the Office of the Director of National Intelligence (DNI) and the Department of Homeland Security (DHS) – have weighed in on this issue, not 17 intelligence agencies. And what they said was ambiguous about Russian involvement.

Saying we think the hacks “are consistent with the methods and motivations of Russian-directed efforts” is far short of saying we have evidence that Russia has been responsible for the hacks. Maybe high-level officials would have authorized them if Russian hackers were responsible, but the DNI and DHS statement did NOT say there was evidence Russia was responsible.

The biggest project in all of Clinton’s fakery was an effort to humanize herself. She took selfies with celebs, she danced for celebs, she made cringey Snapchat videos, and she dropped the worst Pokémon Go pun possible, all to fight the longstanding impression that she is inauthentic.

Most normal people could tell when Clinton was trying to push a fake narrative about her personality, as her campaign would do something over-the-top to get it rolling — but “professional” journalists, either sucking up for access or just out of private fandom, made equally awkwards attempt to sell the same story.

Right before Christmas 2015, Clinton tried to play the grandmother card, with a staffer publishing a BuzzFeed-style listicle on her campaign website called “7 ways Hillary Clinton is just like your abuela.” After backlash from Hispanics, they changed the title to “7 things Hillary Clinton has in common with your abuela.” The photo of Clinton with her granddaughter Charlotte was… not very subtle. 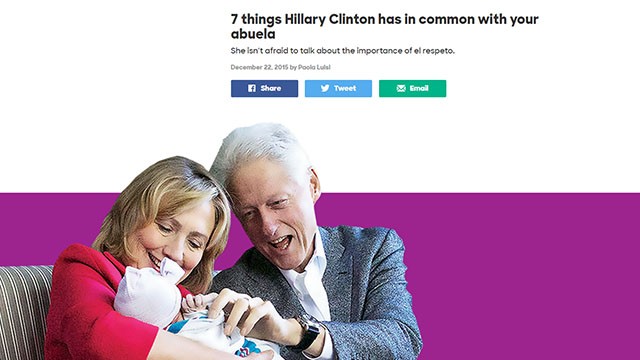 However, the “abuela” fiasco was nothing compared to the fake news narrative that Clinton’s status as a grandparent would make her a great commander-in-chief. Some headlines to that effect:

ET—“EXCLUSIVE: Hillary Clinton Says She’ll Have a Nursery in the White House for Her Grandchildren”

The Atlantic: “Hillary Clinton: Grandmother in Chief” (“For decades now, Hillary has been insisting that she’s a trailblazer and a traditionalist all at the same time. Now, by running as a grandmother, she may finally make Americans believe her.”)

In the same way, Clinton tried to convince the world that she was the “love and kindness” candidate of the 2016 race. No, seriously.

She got several journalists to run with the idea. Clinton’s campaign placed a 6,000+-word puff piece on this theme with BuzzFeed’s Ruby Cramer, several months after the Associated Press noted, “Clinton rarely ends her remarks without asking her audience to consider adding some ‘love and kindness’ to their daily lives.”

However, this fake news narrative ignores an important fact: the miserable experiences of people who worked in close proximity to Clinton daily, putting their lives on the line for her.

During the general election, voters saw similar accounts from State Department security personnel (in FBI interview documents) and a former White House Secret Service Agent, who said Clinton was “contemptuous” of her security agents and prone to explosive anger:

This woman said Clinton treated the agents protecting her and her staff’s lives with “contempt.” The document states: “[Redacted] explained that CLINTON’s treatment of DS agents on her protective detail was so contemptuous that many of them sought reassignment or employment elsewhere.

“[Redacted] claims to have had at least one conversation with Secret Service agents who experienced the same poor treatment.”

Similarly, Wikileaks showed that Clinton’s inner circle tiptoed around her temper. Podesta himself warned longtime aide Philippe Reines “to stop whipping her up beyond what she is quite capable of doing on her own.”

8. A stranger just happened to find me in public!

Finally, Clinton’s fake news has not stopped even after the election.

By her own admission, she has not driven a car since 1996, and she employs a manager for her Chappaqua home named Oscar Flores — yet she and Bill obviously went out for groceries before Thanksgiving, to be spotted by a marketing manager who also happened to take a video of Clinton casting her ballot and also happened to attend the third general-election presidential debate in Las Vegas.