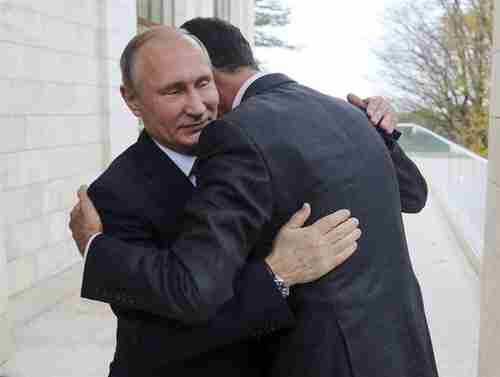 From November: Vladimir Putin and Bashar al-Assad hug and say that the Syria war is at an end (AP)

I have written many times and given detailed examples of what happens to countries following a generational crisis civil war. Such a war is generally between two tribes or ethnic groups who have been neighbors for decades, who intermarried, and whose children played together, but then suddenly they turn on each other and commit atrocities, rapes, murders, torture, mutilations, and massacres on their former neighbors, including women and children.

When such a war ends, someone, usually from the winning tribe, becomes leader, and almost always this is someone who had directed or approved these atrocities, rapes, and massacres, and in his mind considers them to have been completely justified. It should not be considered the least bit surprising that such a person turns into sociopathic monster, just like individuals like John Wayne Gacy, Ted Bundy, Jeffrey Dahmer, and David Berkowitz.

The difference, of course, is that these individuals can carry out further atrocities, rapes, and mutilations only through their own resources, while country leaders can turn the entire government into a genocidal bulldozer. These include Paul Biya in Cameroon, Pierre Nkurunziza in Burundi, Paul Kagame in Rwanda, Yoweri Museveni in Uganda, Robert Mugabe in Zimbabwe, Joseph Kabila in DRC, or, outside of Africa, Bashar al-Assad in Syria and Hun Sen in Cambodia. In the last century, they include Josef Stalin and Mao Zedong.

So Syria’s Shia/Alawite president Bashar al-Assad is continuing with full force his war of extermination against his historically hated enemies, the Syrian Sunnis. He has made it clear repeatedly that he considers them all to be the equivalent of cockroaches, and are to be exterminated, just like cockroaches. Furthermore, he is receiving the full support of Russia’s Christian president Vladimir Putin, Iran’s Shia so-called cleric Seyed Ali Khamenei, and Lebanon’s own psychopathic Shia monster, Hezbollah leader Sayyed Hassan Nasrallah. These people all claim to have some level of piety, but if their religions mean anything, then they will all burn in hell for their monstrous sins.

As I have written many times in the past, Bashar al-Assad is the worst genocidal monster so far this century. The Syrian war began in 2011 when al-Assad ordered his army and air force to attack peacefully protesting civilians, including women and children. Things really worsened in August 2011, when al-Assad launched a massive military assault on a large, peaceful Palestinian refugee camp in Latakia, filled with tens of thousands of women and children Palestinians. He dropped barrel bombs laden with metal, chlorine, ammonia, phosphorous and chemical weapons onto innocent Sunni women and children, he targeted bombs on schools and hospitals, and he used Sarin gas to kill large groups of people.

It is almost unbelievable how much destruction al-Assad has caused. Thanks to al-Assad, Putin, and Khamenei, about 50,000 jihadist fighters from 86 countries came to Syria, first to join the rebels fighting al-Assad, then to join the al-Qaeda linked Jabhat al-Nusra, and the so-called Islamic State (IS or ISIS or ISIL or Daesh). Al-Assad’s actions created the al-Nusra Front and ISIS. He has created millions of refugees that have flooded into neighboring countries, and over a million have poured into Europe.

18 months ago, Bashar al-Assad, Putin, Khamenei, and Nasrallah were targeting East Aleppo in Syria, with 275,000 people, including huge numbers of women and children. By the time it was over, there were hundreds of thousands of deaths, and the city was almost completely destroyed.

So now al-Assad, Putin, Khamenei, and Nasrallah are doing the same thing to Eastern Ghouta, with 400,000 people, including huge numbers of women and children. Ghouta became world famous in 2013 because it was the place where al-Assad used the WMD Sarin gas on ordinary civilians.

Last week, at least 25 civilians were killed by regime and Russian airstrikes, followed by 17 on Saturday.

Aid agencies have told the BBC that the airstrikes are particularly targeting hospitals. At least 10 hospitals have been targeted by airstrikes in the last two weeks. These include barrel bombs targeting a maternity hospital, presumably because al-Assad believes that the babies being born in these maternity hospitals are just baby cockroaches, and they should be exterminated immediately.

So if it took al-Assad about six months to totally destroy East Aleppo, with 275,000 people, then we can expect him to take about ten months to similarly destroy Eastern Ghouta, with 400,000 people. Al-Assad has a lot more women and children to kill, and a lot more maternity hospitals to bomb, so it will take a while. BBC and AFP and Reuters

Al-Assad has indicated that he will next turn his attention to Idlib and the neighboring parts of northwest Syria, now home to more than 2 million people, many of them refugees from East Aleppo and other regions attacked by al-Assad.

According to the Russians, Ghouta and Idlib were all supposed to be “de-escalation zones,” by agreement of Russia, Iran, and Turkey in meetings in Astana, Kazakhstan. I always said that those meetings and agreements were a complete farce for the obvious reason that they involved Russia, Iran, and Turkey, but not the actual people fighting on the ground, al-Assad’s army and Sunni opposition fighters. And we are seeing that farce now. The de-escalation agreements are completely meaningless since al-Assad never had any intention of following them. That would have been like the U.S. and Mexico trying to end World War II in Europe by signing a de-escalation agreement with each other in Acapulco. It’s just a complete farce.

Readers may recall that in November, Bashar al-Assad and Vladimir Putin hugged each other, and said the war was over. Putin said:

I asked the Syrian president to stop by. I would like to introduce you to people [al-Assad] who played a key role in saving Syria.

Regarding our joint operation to fight terrorists in Syria, this military operation is indeed coming to an end. I’m pleased to see your willingness to work with everyone who wants peace and settlement.

This can only be described as more high farce.

So the question is this: How long is this unbelievable carnage going to go on? Bashar al-Assad has been killing innocent women and children for seven years, and has created millions of refugees. Is he going to be allowed to continue killing innocent women and children for another seven years? How long will it be before anyone says, Enough! Reuters and Al Jazeera and BBC (13-Dec-2017)