The Taliban, a jihadist terrorist organization, vowed during a press conference Tuesday to prevent “discrimination against women” now that it had taken over Afghanistan.

The promise, if kept, would be a major deviation from the extreme repression of women during the Taliban’s last tenure as the official government of the country and its consistent behavior in the 20 years thereafter.

Taliban spokesman Zabihullah Mujahid held his first televised press conference on Tuesday since Taliban leaders surrounded Kabul, the nation’s capital, prompting former Afghan President Ashraf Ghani to flee the country. The jihadist organization launched a successful campaign to depose the Afghan government beginning in April, when President Joe Biden announced he would extend the Afghan War through September (he since changed his deadline to August 31). Prior to that announcement, U.S. troops were set to permanently leave the country by May 1 as per an agreement brokered between the Taliban and the administration of former President Donald Trump.

In four months, the Taliban captured more territory than it had controlled when in power prior to the 2001 American invasion. Taliban leaders declared the restoration of the “Islamic Emirate of Afghanistan” on Sunday night.

Mujahid, one of the most prolific Taliban representatives on Twitter, held a press conference Tuesday to address the nation and offer more detail into the Taliban’s plans for ruling the country. Addressing concerns that radical Islamists, and the Taliban in particular, had a horrific record of human rights atrocities against women, Mujahid insisted that the Taliban was “committed to the rights of women within the framework of sharia,” or the Islamic law.

“Our sisters … have the same rights, will be able to benefit from their rights,” Mujahid said, according to a translation by the U.K. Guardian. “They can have activities in different sectors and different areas on the basis of our rules and regulations, educational, health, and other areas.”

For those with “concerns,” he insisted, the Taliban “would like to assure them that there is not going to be any discrimination against women,” adding, “but of course within the frameworks that we have.”

Mujahid says they are committed to providing women their rights based on Islam. He says women can work in the health sector and other sectors where they are needed.

He says there will be no discrimination against women. pic.twitter.com/6wHcTyXEV4

Mujahid’s assurances have done little to assuage concerns internationally that the group will return to its prior treatment of women, given the Taliban’s extreme interpretation of the sharia which in the past resulted in total bans on girls going to public school, women having jobs, and mandatory use of the burqa, or full face covering. As PBS described in 2007, the Taliban era featured regular public beatings of women “for a broad spectrum of violations: exposing ankles, being outside without a male relative, laughing loudly, wearing shoes that made noise when walking, and/or wearing the wrong type of burkha.” The Taliban also normalized stonings for “crimes” such as adultery. 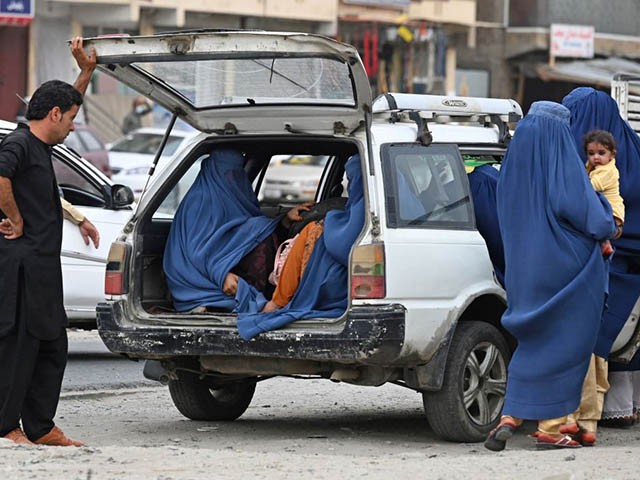 Mujahid did not clarify if these punishments would be returning to the streets of Afghanistan’s major cities with a return to Taliban rule. He did state that the Taliban would allow women to study and work, but did not specify if there would be limits on how old girls can be before their education ends or any types of jobs the terrorists would ban women from.

The spokesman also failed to address reports that Taliban jihadists had already begun mass abductions of girls as young as 12 to use as sex slaves and jihadi brides in cities conquered prior to Kabul.

Other Taliban officials have also failed to address women’s rights beyond the vague caveat that they will exist only within the sharia.

“The Islamic Emirate doesn’t want women to be victims. They should be in government structure according to Shariah law,” Taliban cultural commission member Enamullah Samangani said Tuesday.

“People want us and they ask us to be with them. Everyone supports us, and we will give them all the rights specified in the Islamic sharia. We are committed to this,” Mujahid told the Kurdish outlet Rudaw.

A small group of women took the streets of Kabul on Tuesday to demand that the new government respect their right to live and work freely, calling for “work, education, and political participation. The women reportedly did not directly address the Taliban, but simply those in power, though they did not deny that they meant to defy Taliban rulers.