Two weeks after Hong Kong’s Legislative Council (LegCo) passed a bill that gave local officials the power to ban movies “deemed contrary to the interests of national security,” China announced the premiere of its Korean War propaganda film The Battle at Lake Changjin in Hong Kong and Macao.

According to China’s state-run Global Times, The Battle at Lake Changjin will premiere in Hong Kong and Macao on Thursday. The producers are also planning premieres in North America, Europe, Australia, Malaysia, and Singapore, but no firm dates were given.

The Chinese Communist Party (CCP) has spared no effort to pump up the box office for the film, which depicts valiant but poorly-equipped Chinese soldiers vanquishing American troops in a Korean War battle. In addition to providing state funding to make the movie, and staggering amounts of free state media to promote it, the CCP strongly hinted that all Chinese citizens have a patriotic duty to see it at least once – and then hedged its bets by ensuring The Battle at Lake Changjin was the only movie playing in some theaters. 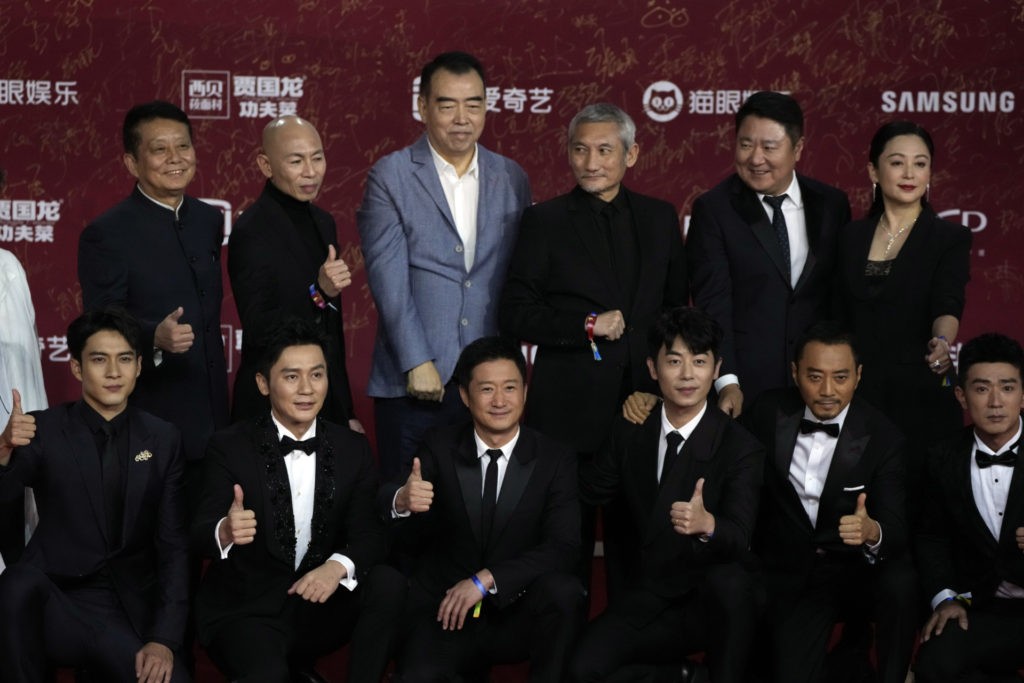 The cast and crew from the movie The Battle at Lake Changjin including directors, from top row second from left, Dante Lam Chiu-Yin, Chen Kaige and Tsui Hark attend the red carpet for the 11th Beijing International Film Festival held on the outskirts of Beijing, China, Monday, Sept. 20, 2021. (AP Photo/Ng Han Guan)

The Global Times claimed Hong Kong audiences were eager to see the film – so eager that one of them repeated verbatim the propaganda line about Lake Changjin’s superiority to Hollywood superhero films that featured in Chinese state media reports last month:

Jacky Ko, a 41-year-old Hong Kong key opinion leader (KOL), told the Global Times on Sunday that he has been looking forward to the film for a long time, and will organize an outing for KOLs and some young volunteers to watch the movie.

“I will recommend that Hong Kong residents see the film, especially young people in Hong Kong. They will understand the significance of safeguarding national sovereignty and integrity and national dignity. It is not easy to have today’s peaceful life, and we should cherish it,” he said.

He also pointed out that compared with fictional Hollywood superhero stories, Chinese films about heroism usually present real historical events or are adapted from real stories that happened in China, which is more convincing and can rouse empathy among the Chinese audience.

The historical accuracy of The Battle at Lake Changjin is questionable, but the CCP addressed that problem by arresting those who questioned it. The same fate could be expected by nitpickers in Hong Kong, where criticizing China’s big nationalist epic – released on the eve of the CCP’s 100th anniversary – would doubtless be classified as a seditious threat to national security and prosecuted under the law Beijing imposed to crush the 2019 pro-democracy movement. 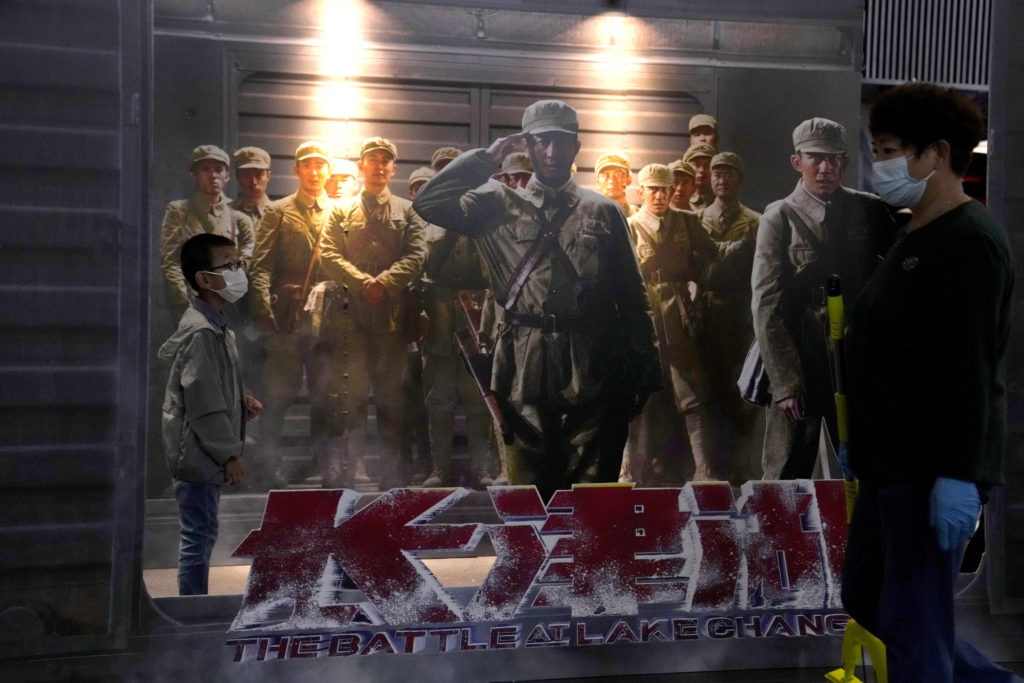 South Koreans enraged by the Chinese blockbuster, which celebrates the rise of the monstrous nuclear-armed tyranny to their north, have no problem ripping into the historical inaccuracies.

“China is very powerful economically and they are becoming more aggressive toward their neighbors, and it appears they think that power gives them the right to alter history. I think that [South] Korean people are angry and disappointed about this,” Seoul lawyer Han Ye-jung told Deutsche Welle (DW) in October.

DW noted that South Korean war veterans in September blocked the release of another Chinese film about the Korean War, The Sacrifice, so the prospects of The Battle at Lake Changjin being released in South Korea are not good.

“It is an anti-national act that goes against the system of liberal democracy to show to our young people today a propaganda film describing Chinese soldiers as heroes when they were actually part of a war that infiltrated our country,” the Korean War Veterans Association said of The Sacrifice.

On the other hand, Deadline suggested American audiences should consider broadening their cultural horizons by soaking up The Battle at Lake Changjin on the “largest possible screen,” even though it is clearly propaganda from a hostile government:

Since there’s absolutely no question what point of view this $200 million-plus epic propagates, Western viewers are thus offered an opportunity to see what it feels like to be on the opposite side of a good guy/bad guy narrative, one in which the villains are the Yank soldiers who just a few years earlier crucially helped save the world from Hitler and Tojo. So it’s an unusual feeling to watch a film celebrate the vanquishing of a Western military force by a theoretically far less capable opponent — a sneak peak, if you will, of Vietnam not too many years in the future.

This Battle is a staggeringly enormous thing, lavishly staged, indulgent in allowing a few characters to pop here and there without really establishing much audience connection, relishing its opportunities to achieve maximum speed and impact, and fully trumpeting a nationalistic and societally optimistic outlook.

Anyone into big-time action cinema on the largest possible screen will more than get their money’s worth, even if the film is simplistic and entirely predictable in its goals, both as action and politics. But it doesn’t matter how big your screen is at home — if you want to see this at all, see it on a really big screen.

Deadline’s take touches on the third reason China is pushing The Battle at Lake Changjin so hard. Obviously, it is part of the CCP’s 100th-anniversary festivities. As noted above, Chinese state media is not subtle about blasting the message that Chinese blockbusters are now outperforming Hollywood movies, so Hollywood had better toe the CCP line if it wants to preserve its access to a Chinese box office that no longer needs its products.

The third reason is that China wants to demonstrate its greater cultural power and public morale by making movies with a “nationalistic and societally optimistic outlook,” as Deadline put it – the sort of movie Hollywood is extremely reluctant to make about America’s national spirit and society today.

Major motion pictures that look honestly at American history are hard to come by, let alone movies slanted toward patriotism and American exceptionalism. Hollywood producers are reluctant to make pro-American films because they supposedly will not play in overseas markets. China is pushing hard to make The Battle at Lake Changjin an all-time worldwide box-office champ to prove it does not have that problem.

The Battle at Lake Changjin shows a ragtag Chinese army chomping on frozen potatoes and rallying to become supermen capable of thrashing America’s vaunted military. America’s culture mavens just announced Superman is no longer interested in fighting for truth, justice, and the American Way. The message to audiences around the world is to place their bets on the country that does not hate itself – the country that wants to win the battle for the 21st Century.