In other words, the Hong Kong police will start goose-stepping, which is the style favored by the PLA.

Hong Kong Junior Police Officers Association chair Lam Chi-wai told China’s state-run Global Times the PLA foot drills will be a “symbolic change in ideology,” a “removal of colonial overtimes,” and a symbolic gesture “demonstrating to the world that Hong Kong is an inseparable part of China.”

Lam said marching like the PLA would “emphasize the HKPF officers’ fervent patriotism” and “strengthen their national identity.”

Hong Kong police will officially abandon British-style foot drills and perform Chinese-style foot drills of the PLA, a removal of colonial overtones, demonstrating to the world that HK is an inseparable part of China: Junior Police Officers’ Association.https://t.co/R0mo19Ekci

According to the Global Times, other Hong Kong agencies, including the Fire Services Department and Immigration Department, are already using PLA foot drills.

“Foot drills play a crucial role in developing a sense of discipline and team spirit in the disciplined services. The Chinese-style foot drill emphasizes uniformity and teamwork, requiring an elaborate display of synchronized movements with steady and sonorous steps to showcase high spirit, confidence and the commanding presence of the team,” the Beijing-controlled Hong Kong government said on May 4 when announcing its Customs department has fully adopted the PLA technique. 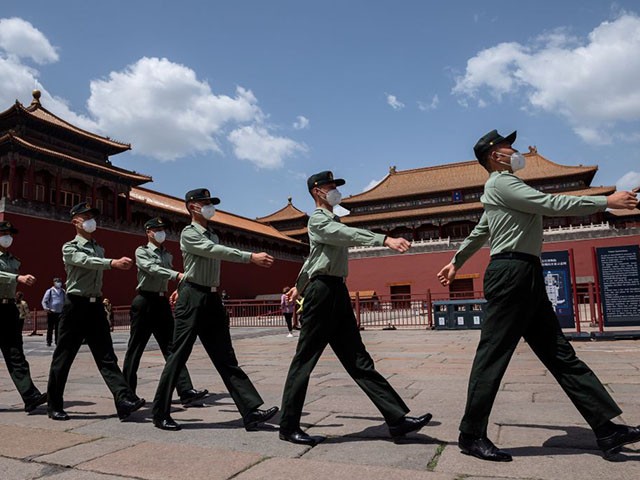 People’s Liberation Army (PLA) soldiers wearing face masks walk past the entrance to the Forbidden City in Beijing on May 18, 2020. (NICOLAS ASFOURI/AFP via Getty Images)

Hong Kong police have been training with the PLA troops garrisoned in Hong Kong since February 2021. The HKPF insisted at the time that PLA training was purely for “ceremonial activities” and there were “no plans to change current foot drills.”

Police officials told the Hong Kong Free Press (HKFP) in April 2022 that officers who perform the city’s daily flag-raising and flag-lowering ceremonies had incorporated Chinese foot drills into their routines. The HKFP’s sources said PLA drills would become standard across the force in July, to “replace the current style of marching, which has British characteristics rooted in the city’s colonial past.”

The Chinese Communist Party has been trying to force PLA foot drills on Hong Kong youth groups since 2018, but the groups resisted growing pressure from Beijing and stayed with British drills for as long as they could.

A “government insider” told the South China Morning Post (SCMP) in February 2021 that PLA foot drills would be used during the 25th anniversary events scheduled for July 2022, but “traditional British foot drills would remain the standard technique for the city’s police force.”