Chinese Foreign Minister Wang Yi lectured the United Nations on Saturday to oppose the use of human rights as a “weapon to achieve political ends” and proclaimed Taliban-ruled Afghanistan as transitioning “from chaos to order.”

Speaking before the General Assembly representing dictator Xi Jinping, Wang notably did not proclaim any support for its close ally Russia in its eight-year-old war in Ukraine, instead urging dialogue and an emphasis on economic development from both sides.

Chinese officials have endeavored to remain friendly to Vladimir Putin while not alienating Ukrainian President Volodymyr Zelensky, who has expressed satisfaction with China’s neutrality and urged China to invest in rebuilding Ukraine post-war.

Following a meeting with Xi Jinping in mid-September, Putin said in a statement that he “understands” China’s “concerns” about the Ukraine invasion.

Wang also threatened supporters of the nation of Taiwan, which China falsely claims as its province, to cease standing with the democratic state or be “crushed by the wheels of history.” He spoke repeatedly of opposing “bullying” by large states and countries acting to pursue their security interests, but did not mention China’s main geopolitical rival, America, by name.

Wang claimed the world was living “at a time full of hope” because “the world continues to move towards multipolarity, economic globalization is deepening, and our societies have become increasingly digitalized and culturally diverse.”

” Countries are becoming ever more interconnected and interdependent. Peace and development remain the underlying trend of our times. People’s call for progress and cooperation grows louder,” he declared, offering several bullet points of policy that included “oppo[sing] peace” and “plac[ing] development at the center of the international agenda.”

“He who instigates a proxy war can easily get himself burned,” Wang said, a barb apparently meant for the United States, but without a direct reference to which conflict China was blaming Washington for. “Pursuing one’s own absolute security can only undermine global strategic stability. We must address differences by peaceful means and resolve disputes through dialogue and consultation.”

Wang described the “global security initiative” as a plan for “common, comprehensive, cooperative, and sustainable security to respect the sovereignty and territorial integrity of all countries … to take the legitimate security concerns of all countries seriously.”

When Xi debuted the “global security initiative” in April, he explicitly stated that participating countries should not protect their own nations, urging them to “oppose the pursuit of one’s own security at the cost of others’ security.”

Turning to specific issues, Wang offered support for “dialogue” in Ukraine, but did not condemn Russia’s invasion or oppose Ukraine’s response. 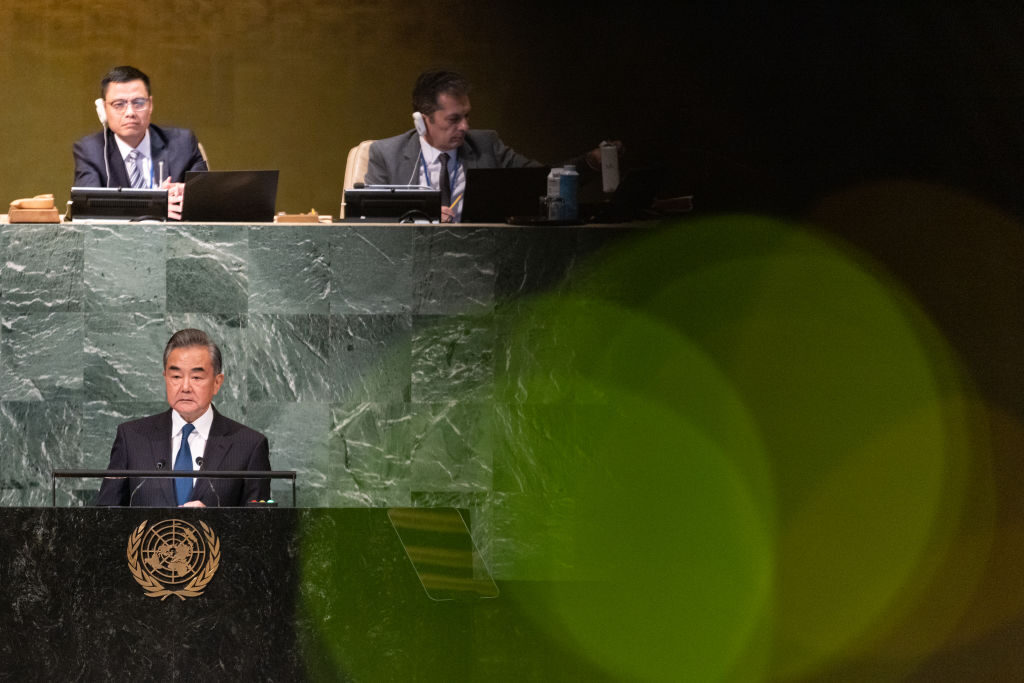 Chinese government officials have regularly blamed the United States for the Ukrainian conflict, which began in 2014 when Russia invaded and colonized Ukraine’s Crimean peninsula. Chinese officials have claimed that the existence of NATO, a mostly Western military alliance, nearly Russia – and Ukraine’s aspirations to join it – prompted the invasion. Wang omitted any reference of NATO at the United Nations on Saturday.

Wang also addressed the situation in Afghanistan, where the Taliban jihadist terror organization has been in power over a year thanks to leftist President Joe Biden’s extension of the 20-year Afghan war, leading to an abrupt withdrawal that preceded the collapse of the U.S.-backed government there.

Afghanistan, Wang said, was in a “critical transition from chaos to order” under the Taliban in which the terrorists must create an “inclusive” atmosphere in which “fighting terrorism and integration into the region [are] the priorities.”

Wang condemned sanctions on the Taliban, a terrorist organization with close to al-Qaeda, as “an unacceptable practice that must be corrected.”

The Chinese Foreign Ministry concluded with a warning to supporters of the free state of Taiwan that they will be “crushed by the wheels of history,” an echo of a threat Xi made in 2019 that Taiwan and its supporters would have their “bones ground to powder.”

FOLLOW THE MONEY: Chinese state media admits China's blossoming ties with the Taliban are aimed at getting control of Afghanistan's mineral wealth. https://t.co/PVM51xUgpY

“Since ancient times, Taiwan has been an inseparable part of China’s territory. … The fact that the mainland [China] and Taiwan belong to the same china has never changed,” Wang said.

In reality, Taiwan has never been governed by a regime located in Beijing in its history and operates an entirely separate state apparatus from China. Despite this, Chinese regime bullying prevents Taiwan from membership in the United Nations or any of its agencies, including seemingly apolitical agencies like the World Health Organization (W.H.O.).

“We must uphold equity and oppose bullying,” Wang said elsewhere in his remarks. “No country should abuse its power to bully other sovereign countries.”