Thousands of pro-life conservatives converged on the Texas Capitol with Texas’ First Lady Cecilia Abbott on Saturday to show support for the passage of more pro-life legislation. The Texas Legislature is just beginning the 84th session and pro-life supporters are expecting more from this highly conservative legislature.

First Lady Abbott delivered a very touching and emotional speech that included reading a letter from her husband, Governor Greg Abbott, according to a tweet from the Texas Young Republicans (@TexasYR on Twitter). During her speech, Mrs. Abbott stressed the importance of adoption in preventing abortions. She reminded the attendees that she and Governor Abbott had adopted their daughter, Audrey.

Prior speakers at this conservative event have included former Governor Rick Perry. This is the first public appearance for Mrs. Abbott since becoming the first Hispanic First Lady of Texas on Tuesday. This event could signal her interest in playing a more active role as First Lady than her predecessor. 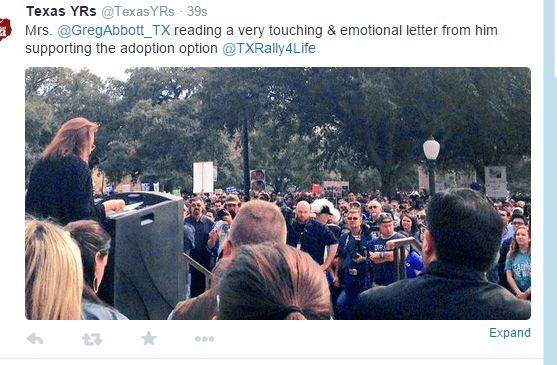 The event marks the observance of the 42nd anniversary of the Roe v. Wade Supreme Court decision. The rally in Austin follows on the heels of the March for Life rally held in Washington, D.C. earlier. That event put forward a challenge to Republican lawmakers to pass legislation to ban most abortions after twenty weeks, according to an article on Breitbart’s Big Government by Charlie Spiering.

“The Pain Capable Unborn Child Protection Act is so important, because it shifts the debate in the pro-life community all across this country and makes very clear the pain an unborn child feels is very real and very wrong,” said Rep. Cathy McMorris Rodgers (R-WA).

In Texas, the Texas Young Republicans thanked State Representative Tony Dale (R-Cedar Park) for being the legislative sponsor of the Rally for Life.

Texas Land Commissioner George P. Bush also delivered a headline speech to the crowd. During his keynote speech to the cheering crowd, Bush reminded everyone that all lives are created in God’s image. 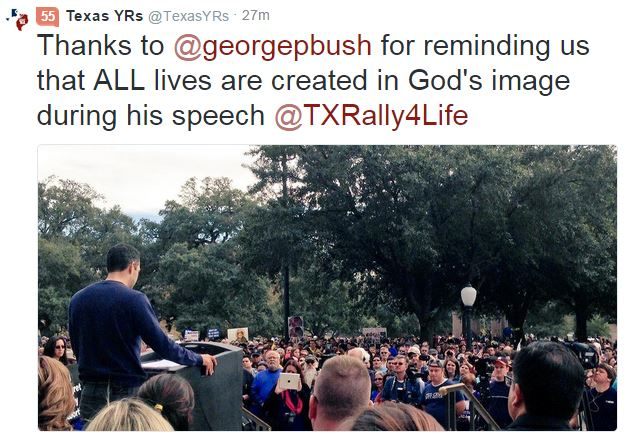