Pamela Geller is planning a “Draw the Prophet” event in Garland, Texas in the same location as a Muslim group held a “Stand with the Prophet” conference in January. The First Annual Muhammad Art Exhibit and Contest will be hosted by the Curtis Caldwell Center, which is owned and operated by the Garland Independent School District.

Geller’s event comes on the wake of the Islamic terrorist attack on the French magazine Charlie Hebdo in January. Following the attack, the Council on American-Islamic Relations (CAIR) scheduled the “Stand with the Prophet” conference at the public school district’s conference center. Geller, the President of the American Freedom Defense Initiative (AFDI), scheduled a protest outside the event that was attended by approximately 2,000 people.

During the Free Speech Rally in Garland, Geller spoke with Breitbart Texas about her reaction to the large and loud crowd of protesters. She said that Muslims are trying to impose restrictions on free speech like they are doing in Paris. “Thousands of Americans said ‘no way!’”

“The media can smear us and the President can stand with them,” Geller said. “We the people are not having it. If there is any proof of that, it’s today. We dwarfed them.”

“If the Western media ran the Danish cartoons back when this Islamic supremacist movement first started gaining steam, the editorial staff of Charlie Hebdo would be alive today,” Geller stated in response to an inquiry from Breitbart Texas. “That said, the European press ran the Hebdo cartoons in the wake of that jihad slaughter. But the American press would not. The beacon of freedom, the shining light on a hill, is running scared. Well, that’s not who we are. The elites do not represent the people.”

“Enough is enough,” she explained. “They’re just cartoons. We’re holding this exhibit and cartoon contest to show how insane the world has become — with people in the free world tiptoeing in terror around supremacist thugs who actually commit murder over cartoons. If we can’t stand up for the freedom of speech, we will lose it — and with it, free society.”

The art exhibit and contest will be held at the Curtis Culwell Center in Garland on May 3rd.  ”This was the site of a Muslim conference denouncing ‘Islamophobia’ — an obscene stand for them to take after the Charlie Hebdo massacre – and our massive Free Speech Rally outside that event,” Geller wrote in a press release obtained by Breitbart Texas.

The contest will take submissions online and the winner will be announced at the event in Garland. The winning cartoonist will receive a $10,000 prize. The exhibit will feature images of Islam’s prophet in both historical and contemporary settings. There will also be a series of speeches by internationally renowned free-speech advocates.

Geller explained that the art exhibit is the next logical step following AFDI’s Free Speech Rally in Garland. “This event will stand for free speech and show that Americans will not be cowed by violent Islamic intimidation,” she stated. “That is a crucial stand to take as Islamic assaults on the freedom of speech, our most fundamental freedom, are growing more insistent.”

“Of course, this event will require massive security,” she assured potential attendees. “But this exhibit has to be staged. If we don’t show the jihadis that they will not frighten us into silence, the jihad against freedom will only grow more virulent.”

An author and activist with passionate fans and detractors, Geller has been sounding the alarm about Muslim encroachment into Europe and America and the possible impact on American culture in the future. The Free Speech Rally Geller organized is one of many activities she has created to shine the light on radical Islam and the teachings of Imam’s in mosques in the United States.  In June, 2010, Geller organized and led a group of approximately 5,000 protesters (Geller released this estimate) to march on the site of the site of the proposed “Ground Zero Mosque.” Eventually, plans for the mosque were cancelled.

Geller is also listed as an “Extremist” on the left-wing Southern Poverty Law Center’s (SPLC) website. The SPLC says she is the “anti-Muslim movement’s most visible and flamboyant figurehead. She’s relentlessly shrill and coarse in her broad-based denunciations of Islam.” The organization also lists AFDI as an anti-Muslim hate group. 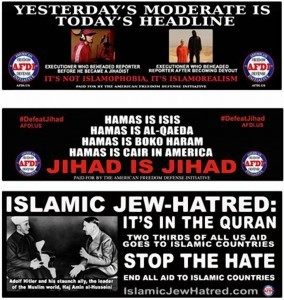 Late last year, Geller made headlines by running an anti-Islam advertising campaign on buses and subway stations in New York City. She said the campaign was designed to educate. It was designed to warn the public of the “problem with jihad” and Sharia Law. The ads also ran in San Francisco, where Geller drew fire from the Jewish Voice for Peace. The organization states that Geller and AFDI “have initiated Islamophobic ad campaigns in more than a dozen communities, from Boston to Seattle, Chicago to Miami. The pattern is simple—provide hateful anti-Muslim/anti-Arab ad copy to a public transportation agency, offer to make a modest ad buy, sue (or threaten to sue) the agency on First Amendment grounds if it refuses to run the ad (or expresses reservations about running it), and reap lots of free publicity from the ensuing media coverage of the controversy.”

More information about the event will be published at a later date on the AFDI Facebook page.