AUSTIN, Texas – Texas Sheriffs, the Lieutenant Governor, and experts in immigration related issues met at the State Capitol on Wednesday to discuss the federal government’s creation of a sanctuary state for criminal aliens through its Priority Enforcement Program (PEP).

Jackson County Sheriff Aj (Andy) Louderback, immediate past president of the Sheriff’s Association of Texas, told Breitbart Texas that the federal government’s PEP program “has created a sanctuary state for criminal aliens because it has gutted the immigration system.”

A press conference was held on the crisis facing Texas that was created by the new immigration policies of the federal government. The sheriffs complained that aliens are being brought into the criminal justice system in Texas but are being released into the community because of the federal policies.

In the past, ICE (Immigration and Customs Enforcement) could place a 48-hour hold on illegal immigrants when they were wanted on immigration related issues. The PEP program replaced the U.S. Department of Homeland Security’s (DHS) Secure Communities plan and now that is no longer possible.

The policy was released by Department of Homeland Security Secretary Jeh Johnson in November, 2014. In January, the program went into effect and Breitbart Texas Managing Director Brandon Darby exclusively reported leaked training documents detailing how the program would be implemented. Darby dubbed the program, “Catch and Release 2.0.”

Breitbart Texas has reported many examples of criminal illegal aliens who have been previously deported many times only to come back and commit even more serious crimes.

In July, Breitbart California’s Michelle Moons reported on the murder of Katheryn Steinle. She was killed by an illegal alien who was released by the San Francisco sheriff despite an ICE detainer in effect. Her killer had been deported several times.

The same week as Steinle’s murder, Darby reported on the murder in Laredo, Texas, of a woman who was killed by her criminal illegal alien husband. He had been deported four times. Despite numerous domestic violence calls to the Laredo Police Department, he was allowed to remain in Laredo until he finally killed her.

There have been many other such reports in the past month about violent criminal illegal aliens who commit more heinous crimes after returning from being deported.

The lieutenant governor, Texas sheriffs, and the director of policy studies for the Center for Immigration Studies spoke at the press conference in Austin, Texas. Their message – the federal government has placed the public in danger through its policies, and these policies have essentially tied the hands of Texas law enforcement. 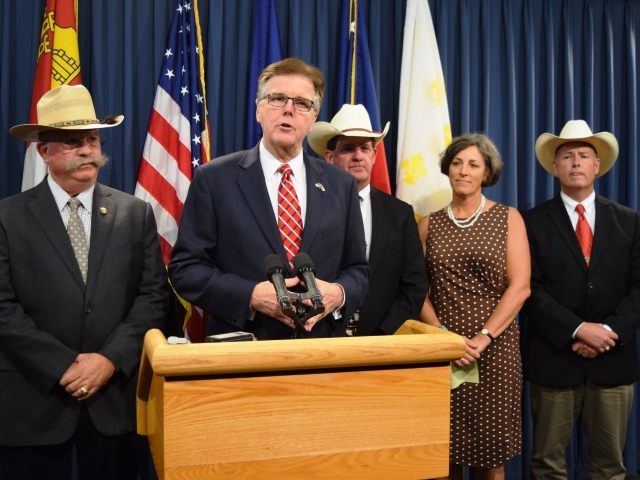 Sheriff Louderback told Breitbart Texas, “This federal program (PEP) replaced a Congress-mandated program and replaced it with a program that now prioritizes criminal behavior and is excluding thousands of criminal aliens.” He says the program is forcing Texas sheriffs to sometimes release even violent offenders.

Louderback said that criminal aliens know that law enforcement officials in Texas have their hands tied because of these new federal policies. They know they can come into the country illegally and stay here with impunity.

He said illegal aliens cannot be held until after there is a final conviction. He said, “These criminals bond out and disappear into the country.”

These policies, say the immediate past sheriff’s association president, “mean that local jurisdictions have to deal with the costs.”

Victoria County Sheriff Michael O’Connor said criminal aliens are traversing over the border and coming in throughout the country. He said that the sheriffs intend to “connect, communicate, and collaborate with community stakeholders” to deal with the problem.

Victoria County, Texas, is located about halfway between Houston and the Mexico/Texas border. He said his county is a “fatal tunnel between Harris County and the rest of the U.S.”

Sheriff Hawthorne told Breitbart Texas, “This is about a secure community program.” He said in 2008, law enforcement were able to do that. He said, “PEP is, and will be, a failure by this [federal] administration.”

Louderback spent 20 weeks in Austin during the 2015 legislative session in the Lone Star state and will be heading up legislative duties for the sheriff’s association.

Note, this article has been updated with additional information.

Lana Shadwick is a contributing writer and legal analyst for Breitbart Texas. She has served as a prosecutor and an associate family court judge. Follow her on Twitter@LanaShadwick2