A photo titled “His Life Matters” taken of a black and a white police officer at the Trinity Police Department in Texas has gone viral. The photo shows the officers with writing on their hands that says “His Life Matters” with an arrow pointing to his fellow officer.

The Trinity Police Department first posted the photo to its Facebook page. The image responded to the #BlackLivesMatter movement, say the officers.

CNN, Fox and Friends, and local television stations in Texas interviewed the officers.

Trinity is a small rural town of approximately 2,721 persons and is in east Texas. The racial makeup of the city is 57.18 percent white, 33.88 percent black, and 10.92 Hispanic. There is a small percentage of Asian, Native American, and other races.

When interviewed by Fox and Friends, Chief Jones said, “I don’t want to put-down law enforcement altogether, but there are so many things that are happening these days that sometimes we can’t stand behind some officers that do bad things.”

The police chief continued, “However, the community and the nation can’t condemn every-single officer just on the actions of a few.”

The officers shared that they wanted to send a positive message in wake of racial tensions and tensions between the public and law enforcement officers. 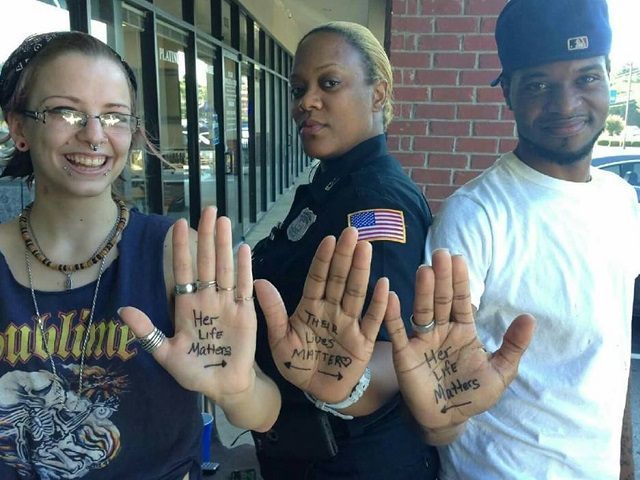 Others quickly picked up the theme. (Photo: Facebook/KTRE-TV)

Officer Givens told CNN, “We did not want the word ‘Black Lives Matter’ to be standoffish because I look at it, I don’t want it to be a hate group because some people see it just like the KKK and skinheads and such, so we took it among ourselves to say that all lives matter.”

Givens told CNN that he is the only minority at the police department but “there is no means by which I have felt isolated.”

The black officer said the nation should come together with local departments. He added that “violence is not a solution to the problem.”

Breitbart Texas reported that armed members of the New Black Panther Party marched on the Waller County, Texas, Jail Wednesday afternoon chanting “The revolution is on… Off the pigs,” and “Oink Oink… Bang Bang!”

The Waller County Sheriff Department jail has seen protests every day during this last month after Sandra Bland’s death.

Bland was found dead in a Texas jail cell three days after her arrest by a state trooper for resisting arrest and disobeying a lawful order. An autopsy report says her death resulted from suicide. Sandra Bland’s arrest and her treatment after that arrest galvanized attention.

A protest at the jail on Sunday turned from peaceful to very aggressive as protesters stormed into the jail, as reported and videotaped by Breitbart Texas. During one protest, a demonstrator told Breitbart Texas that all white people should be killed. Her statements were caught on video. Police arrested Sandra Bland-activist Scott Fare, in Waco, Texas, after he called a trooper “a tyrannical f**ing pig” and threatened to kill the officers.

Lana Shadwick is a contributing writer and legal analyst for Breitbart Texas. She has served Texas as a prosecutor and an associate judge. Follow her on Twitter @LanaShadwick2