Despite attempts to drive the arrest of a Irving teen into a case of Islamophobia, Irving school district spokeswoman Lesley Weaver pointed news media to the district’s Student Code of Conduct during a press conference held on Mohamed’s arrest over a home experiment that he called a clock but appeared to be a “hoax bomb” to district administrators and the Irving police.

Ahmed’s sister told me to post this. Yes this situation is real for those questioning. pic.twitter.com/Oxd0JxUS6O

Earlier, Irving ISD officials, local law enforcement, and Weaver told news media that the district will continue to “conduct and handle the situation in accordance with the Irving ISD Student Code of Conduct.”

The Irving Student Code of Conduct includes a whole slew of potential violations written in accordance with the state’s 1995 Safe Schools Act and Chapter 37 of the Texas Education Code. The code addresses threats, hoaxes, plus perceived and sometimes even discretionary threats and their harsh blanket consequences.

Breitbart Texas reports on the school-to-prison pipeline and the often devastating outcomes of these choking zero tolerance policies that criminalize typical kid behavior nationwide. Just days ago, officials in Maryland charged a 13-year-old boy with assault for stealing a kiss from a 14-year-old girl.

The vast majority affected by rigid zero tolerance policies are boys. Hence, the term war against boys, popularized by Christina Hoff Sommers in 2001. It cuts across race, religion, and socio-economics.

Texas legislators worked diligently with advocates to decriminalize baskets full of juvenile Class C misdemeanor crimes over the past few years. Most recently, they downgraded truancy from criminal to civil status. However, rigid zero tolerance policies still dictate many other kid and teen behaviors in public schools. They can result in class B and A juvenile charges that trigger criminal records on minors, even those who have no prior brushes with the law, and sometimes derails them into the school-to-prison pipeline system.

For example, officials charged a Kaufman high school senior with “minor consumption” of a unopened can of beer in June. Apparently, he drove the family truck to school and mom forgot to remove the cooler left in the back of the vehicle. Barred from his high school graduation, the teen was ordered to attend a Disciplinary Alternative Education Program (DAEP), even though school ended and college was in his future. Zero tolerance also resulted in a Texas nine-year-old’s suspension over a Lord of the Rings “magic ring.” In April, Breitbart Texas reported on a Dallas-area boy suspended for bullying after acting in self-defense.

These same policies dictated the handling of Mohamed’s incident with school officials. Student Code of Conduct manuals act as the behavioral bibles for schools; they stipulate every move pre-K through grade 12 minors make throughout their days on campus.

At the press conference, Weaver reiterated that Mohamed was arrested on Monday and said “the district continues to cooperate fully with the police investigation.” As part of these school policies, she added that the district always asks students and staff to immediately report any suspicious items or behaviors to campus officials. “If something is out of the ordinary” that information is given to school administrators or police “so it can be addressed right away, “Weaver told news media.

“We will always take necessary precautions to protect our students and keep our school community as safe as possible,” Weaver stated, “That is our priority.”

At the presser, Irving Police Chief Larry Boyd added that race played no role in Mohamed’s arrest. He cited an “outstanding relationship with the Muslim community” and added that Mohamed was arrested for bringing what appeared to be a “hoax bomb” to school – not a clock.  The chief pointed out that the images of what Mohamed brought to school that surfaced in news reports and over social media were not “the suspicious looking item” he brought to school. 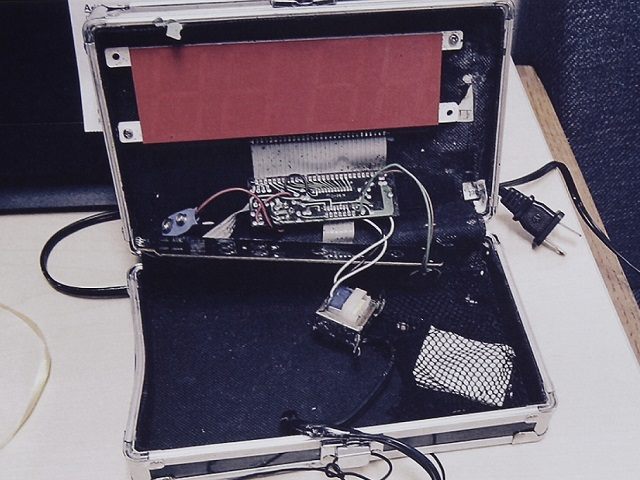 Boyd added that no charges will be filed against Mohamed. The police chief said that that Irving PD was “confident that it’s not an explosive device” and officers determined it “a hoax bomb,” a “naïve accident.” Boyd said “the case is closed,” adding that the reaction to the incident would have been the same regardless of a student’s skin color. As much time should be devoted to reporting on the unforgiving and unrelenting zero tolerance policies that resulted in the Mohamed’s arrest instead of the Islamophobic side show that got all the attention.

According to the Dallas newspaper, after the arrest, a CAIR representative “hustled Ahmed and his family off to talk to a lawyer.” However, when officers and district officials meet with the family later today, Irving ISD spokeswoman Weaver told news media, district officials, and law enforcement intend to explain the Student Code of Conduct handbook to Mohamed’s parents.

Breitbart Texas reported earlier that non-Muslim families across the state share similar accounts of district administrators threatening their children with alternative disciplinary school, suspension, expulsion and even criminal charges following demands for written confessions in grueling interrogation-like sessions where students are questioned over alleged and/or perceived wrongdoing—and in all of these accounts shared with Breitbart Texas, none of the minors’ parents were present. Like in Mohamed’s case, a school principal or assistant principal and a campus police officer conducted these stress-filled inquiries.

Weaver also added that the school can not divulge “additional factual information” because of the federal Family Educational Rights and Privacy Act (FERPA) intended to protect minors. She said that the Mohamed family needed to “grant us written permission” to release these “facts.” However, on Tuesday night, the Mohamed family welcomed media crews at their home.

Since then, Mohamed’s sisters, Eyman, 18, and Ayisha, 17, created an account @istandwithahmed for him to “come to grips with the boy’s overnight ascension to international celebrity,” the Dallas Morning News reported, also noting that the excited Ayisha cried out to older sister Eyman, “We’re trending No. 1.”

Once the predominantly Islamophobic slanted story broke nationally, outpourings of support for Mohamed exploded on social media. In response, Ahmed Mohamed milked the PR spin. He tweeted: “Thank you for your support! I really didn’t think people would care about a muslim boy. #Thankyouforstandingwithme. #IStandWithAhmed.

Thank you for your support! I really didn’t think people would care about a muslim boy. #Thankyouforstandingwithme #IStandWithAhmed

Not long after, Democratic presidential candidate Hillary Clinton tweeted out her two cents on social media on the Islamophobic narrative.

Not to be outdone, President Barrack Obama also jumped on the bandwagon and invited young Mohamed to the White House.

Cool clock, Ahmed. Want to bring it to the White House? We should inspire more kids like you to like science. It’s what makes America great.