DREAMERs and undocumented supporters were at the Texas Capitol to protest the anti-sanctuary legislation debated by the House of Representatives. Several “sanctuary city” sheriffs also showed their support.

Breitbart Texas reported on Monday that Texas Democrats were staging a hunger strike. Representative Victoria Neave (D-Mesquite) first announced her intention to conduct a fast. She also encouraged people to wear black and fill the gallery of the Texas House.

#StopSB4 was trending on Twitter when the Senate Bill 4 was being considered in the Texas House on Wednesday.

Need somewhere new to study? Join us at the capitol where we will be doing a "study in" ALL DAY in protest of SB4 #txlege #StopSB4 ✊🏽😎 pic.twitter.com/JRwrQy5waE

Rep. Eddie Rodriguez (D-Austin) tweeted that “The Texas House Democratic Caucus and Mexican American Legislative Caucus have prepared a robust, multi-pronged strategy for the debate.” He warned, “However, the organizations anticipate that SB 4’s proponents might exploit rarely used procedural tactics to cut off the proceedings prematurely.”

The Mexican American Legislative Caucus of the Texas House of Representatives (MALCTx) held a press conference on the south steps of the Texas Capitol in Austin vowing to fight the measure.

"Be on the right side of history today and vote against senate bill 4" @Karla_QP with United We Dream #STOPSB4 pic.twitter.com/s31qCfIzv7

Karla Perez tweeted a photo of Texas legislators on the House floor dressed in black saying, “Thank you for standing on the right side of history. We will remember who supports SB 4. #SB4isHate #StopSB4 #HereToStay.”

Thank you for standing on the right side of history. We will remember who supports SB 4. #SB4isHate #StopSB4 #HereToStay pic.twitter.com/H4navINubW

The large banner on the United We Dream representative’s Twitter page proclaims “WE ARE #HERETOSTAY.” 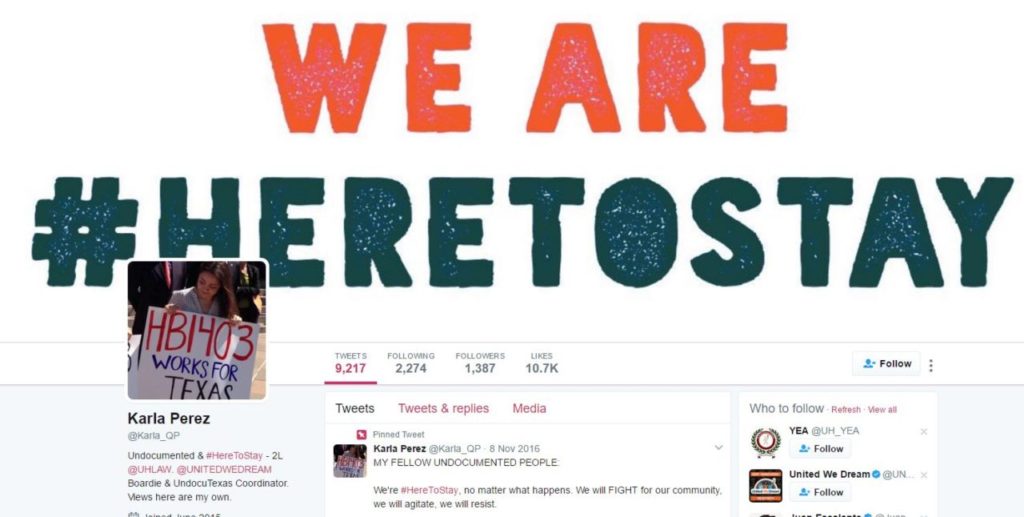 Progress Texas, whose stated mission is to “stand up for the left and fight the right” with “rapid response media and digital strategy,” tweeted “There is a racist undertone to this bill.”

"There is a racist undertone to this bill."
-@TXRepE3#stopSB4#txlege

When has supporting discrimination ever landed someone on the right side of history? #stopsb4 #txlege

Open border and amnesty advocates urged their supporters to call Texas representatives who were allegedly sitting on the fence.

The amnesty and sanctuary jurisdiction advocates brought children to make posters and hand out homemade notes:

TX kids at the capitol today to beg #txlege AGAIN to protect their families and #stopsb4 pic.twitter.com/NIhOcxYcDW

The consideration of anti-sanctuary legislation comes after the Texas Senate passed the bill in early February.

Texas Governor Greg Abbott listed addressing sanctuary cities as an emergency item during his 2017 State of the State Address before a joint session of the legislature in January. The Governor responded after SB 4 was passed saying elected officials don’t get to pick and chose which laws they obey. He also warned, “As Governor, I will not tolerate sanctuary city policies that put the citizens of Texas at risk.”

The fight in the Texas House is expected to be heated and protracted.