Department of Homeland Security Acting Secretary Chad Wolf praised Mexico for its actions to secure the border between that country and Guatemala. His comments come after National Guard troops and immigration officials held off hundreds of Honduran caravan migrants attempting to illegally cross their border.

“I commend the Government of Mexico for upholding their commitment to increased security and law enforcement at their southern border,” Secretary Wolf said in a written statement. “The efforts by the Mexican National Guard and other officials have thus far been effective at maintaining the integrity of their border, despite outbreaks of violence and lawlessness by people who are attempting to illegally enter Mexico on their way to the United States.”

The secretary referenced the violence against the guardsmen on Monday when caravan migrants began throwing large rocks at soldiers attempting to stop their illegal crossings, as reported by Breitbart Texas. 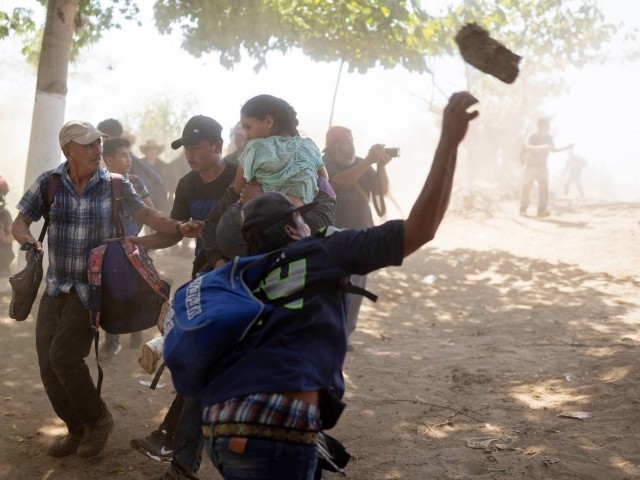 A Central American migrant throws a stone at Mexican National Guards after they crossed the Suchiate River from Guatemala to Mexico, on the riverbank near Ciudad Hidalgo, Mexico, Monday, Jan. 20, 2020.  (AP Photo/Santiago Billy)

Mexico told the migrant they were free to enter Mexico as long as they registered and applied for work in southern Mexico. The Mexican government repeated its position that the migrants would not be given free passage to the United States.

“DHS is monitoring the caravan closely, we have dozens of personnel on the ground in Central America assisting local immigration and security officials, which have already led to hundreds of individuals being stopped, apprehended and sent back to their home countries,” the secretary said.

In Guatemala, ICE agents assigned to assist the government in securing its border with Honduras helped round up and deport hundreds of migrants who illegally crossed the border in an attempt to reach Mexico and eventually, the United States, Breitbart Texas reported.

ICE agents and Guatemalan national police teamed up to sweep up the majority of about 300 caravan migrants who illegally crossed the border late last week, the Associated Press reported. The U.S. ICE agents are assigned to assist Guatemalan law enforcement authorities under an agreement negotiated by the Trump administration in 2019.

“Being part of large group, like a caravan, provides no special treatment or benefits to those who participate,” Secretary Wolf concluded. “Unfortunately, there have been acts of reported violence by some involved in this caravan. The Department is prioritizing the safety and security of our officers and the American people. Should any members of the caravan reach the U.S-Mexico border, they will be processed accordingly and quickly removed, returned or repatriated.”

ldefonso Ortiz is an award-winning journalist with Breitbart Texas. He co-founded Breitbart Texas’ Cartel Chronicles project with Brandon Darby and senior Breitbart management. You can follow him on Twitter and on Facebook. He can be contacted at Iortiz@breitbart.com.