A group of Mexican border state cops are believed to have murdered and incinerated 19 people in January. The victims included migrants, human smugglers, and gunmen headed to Texas.

During a night-time interview, the Tamaulipas Attorney General’s Office announced the arrests of 12 police officers on charges including murder, abuse of authority, falsifying statements, and others related to the January 22 mass killing. If convicted, the officers could face up to 50 years per murder charge.

The case took place just south of the border city of Camargo, where authorities found torched vehicles and 19 bodies. Initial reports noted the discovery of the bodies being tied to a shootout that day. The region has been the scene of several shootouts as rival organizations fight for control of lucrative drug and human smuggling routes.

During a streamed news conference, Tamaulipas AG Irving Barrios Mojica said they were able to identify four victims through DNA testing. Two were Guatemalan migrants. The other two were Mexican nationals tied to human smuggling activities. According to Barrios, the victims were part of a group of migrants moving towards the U.S. border. The official added the group was armed.

The public official would not discuss how the murders took place and what the officers allegedly did. He disclosed crime scene evidence tampering as part of a coverup effort. Barrios Mujica also claimed that one of the vehicles at the scene, a Toyota Sequoia, was previously seized in Nuevo Leon in a separate smuggling case. 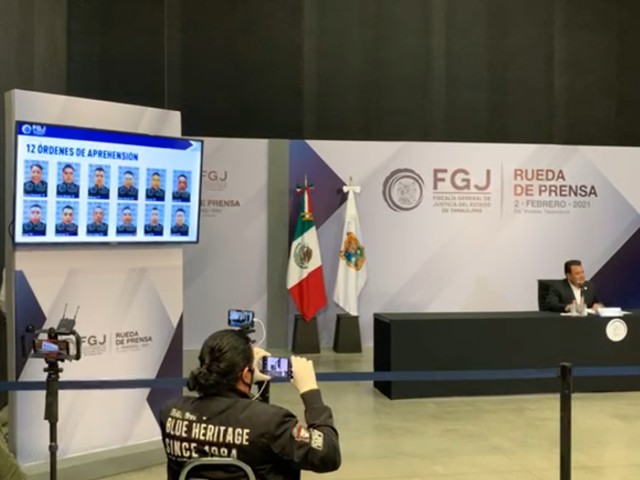 The arrests of the 12 officers comes soon after police in Camargo were linked to the disappearance of two teen from the nearby town of Ciudad Mier. The officers allegedly arrested the teens for a traffic violation and then turned them over to the Gulf Cartel. That case remains under investigation and led to protests by locals.