Migrant detention facilities in West Texas, already exceeding capacity, were forced to close their doors to migrants on Saturday as they have exceeded the physical space to take in more. The increasing surge of migrants in the Del Rio Sector forced Border Patrol officials to resort to outdoor detention under the Del Rio International Bridge along the banks of the Rio Grande River.

The migrant surge in Del Rio brought hundreds of mostly Haitian and Venezuelan migrants entering the city illegally on a daily basis, Breitbart Texas reported. Border Patrol agents are met each morning by hundreds of migrants crossing the shallow Rio Grande near the bridge and surrendering to law enforcement officials. The vast numbers are crippling the Border Patrol’s ability to arrest, transport, and process the migrants efficiently and humanely.

Border Patrol Stations in the area have exceeded their capacity to the extent that there is no physical space to hold even one more migrant, according to a source operating under the umbrella of U.S. Customs and Border Protection. On Saturday, migrants could be seen under the bridge being guarded by Border Patrol agents in lieu of being transported to the overcrowded facilities. The migrants are being held beyond the border fence and away from public view. 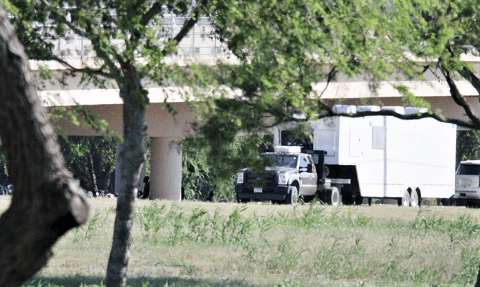 Border Patrol officials set up a command post near the bridge to assist in supervising the migrants and set up temporary toilet facilities in the area. The temperature outdoors exceeded 100 degrees on Saturday. It is unknown how long the Border Patrol will have to resort to outdoor detention with the surge of migrants hitting levels not seen more than 20 years.

Complicating the matter is an executive order signed by Texas Governor Greg Abbott that restricts commercial or private transportation of the migrants on Texas highways due to the COVID-19 pandemic. One local non-profit shelter in Eagle Pass, Texas, refused to admit more migrants due to the order. The shelter assists the migrants with transportation into the interior of the United States. 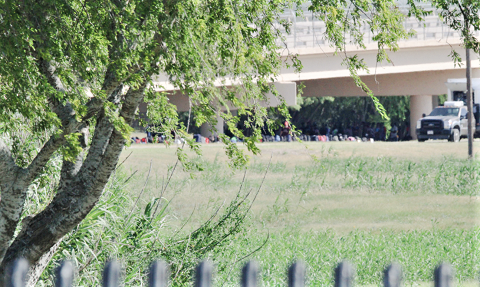 According to a source within CBP, who wishes to remain anonymous, the Border Patrol throughout Texas is facing a crisis never seen before. “This is definitely a situation that rises beyond a crisis. It’s a disaster in the making,” the source says. The Border Patrol in Del Rio is currently in the number two spot nationwide for migrant apprehensions, averaging more than 1,000 arrests per day.

This fiscal year, which began in October 2020, the Del Rio Sector apprehended more than 149,000 migrants. This figure represents a 503% increase compared to the same time period last year. The source says more than 17,000 migrants are currently being detained by the Border Patrol. More than 10,000 in the Rio Grande Valley alone.

“At this point, the system seems to be broken beyond repair. We just don’t have the staffing and resources to sustain this surge” the source explained. “Our Agents are frustrated. They are working six-day weeks just to try and get ahead of this crisis and it’s not working. The situation gets worse every day.”

The source says timing could not be worse for the Border Patrol with the reemergence of COVID-19 infections in the area. “It is impossible to socially distance when you are so overcrowded, our facilities are a breeding ground for the virus” the source concluded.