On Thursday’s “CNN Newsroom,” CNN.com Religion Editor Daniel Burke reported that Craig Hicks, who is suspected of murdering three Muslim students, had previously written in defense of the Ground Zero mosque and criticized those who thought President Barack Obama was Muslim on what appears to be his Facebook page.

“When you kind of pore through his Facebook page, you see dozens and dozens of posts making fun of religion in general, making fun of the idea of prayer, the idea of god. A lot of these are quotes from people like Sam Harris, Richard Dawkins, Bill Maher, but I didn’t see anything that was violent, and I didn’t see anything that particularly pertained to Islam. In fact, there are a couple of instances in which he seems to implicitly defend Islam, there’s a post from around the time when they wanted to build a mosque near Ground Zero in New York where he calls out conservative critics who didn’t want the plan to go forward saying, ‘hey, you guys are being hypocrites. If you are allowed your freedom of worship, Muslims should be allowed, too.’ He also calls out conservatives who made–spread rumors about President Obama being a Muslim. He said, ‘so what if he is Muslim? It’s okay if we have a Muslim president.’ So, his views against religion are kind of, very anti-religious, but nothing specifically against Islam,” he stated.

On November 18, 2012, Hicks shared a picture reading “Suppose for a minute that Barack Obama is a Muslim. Article VI, Paragraph 3 of the United States Constitution specifically states that there is no religious test for any public office. So really, the problem isn’t the President. It’s that you are a bigot.” 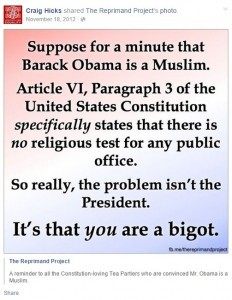 Hicks also vehemently defended the construction of the Ground Zero mosque. On August 13, 2010 he expressed his agreement with President Obama supporting the building of the mosque. Six days later, he posted “Seems an overwhelming majority of Christians in this country feel that the Muslims are using the Ground Zero Mosque plans to’mark [sic] their conquest’ Bunch [sic] of hypocrites, everywhere I’ve been in this country there are churches marking the Christian conquest of this country from the Native Americans. Funny thing is the Christians did that while defying our Constitution, and got away with it!!” 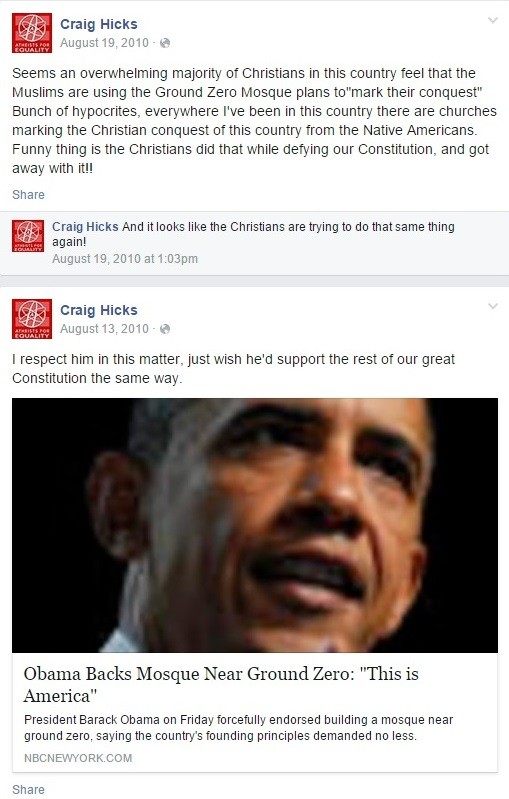 Hicks’ most vehement defense of Islam came on August 30 of 2010. Hicks posted an article about a billboard put up by the Freedom from Religion Foundation being vandalized, with the comment “Once again, Christians have to push their beliefs on the rest of the world(much [sic] less our country which is against the law)!! I don’t believe in Christianity at all, but I would never vandalize anything of theirs. Course neither would a Muslim, makes a person wonder which is more of a peaceful religion I believe!” After one of his friends (whose name has been redacted in the screenshot) asked Hicks if he considered the destruction of the World Trade Center on 9/11 to be “vandalism,” Hicks responded “Come on now [name omitted], you of all people are smart enough to know that those were extremists. They were not practicing Islam any more than Jim Jones and David Koresh practiced Christianity.” 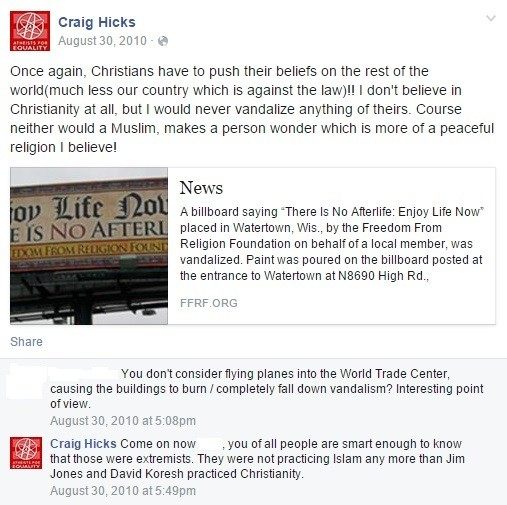 Burke added that there had been a “role reversal” among many like those who Hicks quoted on his Facebook page, saying “for years we’ve had people like Richard Dawkins and Sam Harris argue that Islam is inherently violent and that all Muslims kind of share the blame, share some sort of culpability for atrocities carried out in the name of their religion. And so when Craig Hicks’ atheist views came out yesterday, when they came to light yesterday, you had a number of atheist groups very quickly denouncing them, and saying ‘atheism is not about violence, it’s about letting people have whatever views they want to have even though we disagree with them,’ but also that ‘this guy does not represent atheism. It’s a kind of peaceful belief just as other beliefs are peaceful.’ But there are other atheists who say, ‘we should take a look at the rhetoric that we’re using about religion, specifically Islam, whether we’re fomenting this kind of attitude of hatred. Islam has been in the hot seat for the last decade, at least, and maybe atheists should kind of tone down the rhetoric a little bit,’ they’re saying, and kind of turn down the heat a little bit.”