Blue-collar and white-collar Americans “are being clobbered, they’re being killed,” former Vice President Joe Biden claimed at the January 14 Democrat debate in Iowa.

However, unemployment is at record lows, many sidelined Americans are getting jobs, and blue-collar wages are rising at rates not seen for many years amid President Donald Trump’s new curbs on legal and illegal immigration.

Biden told the audience at CNN’s debate in Iowa:

Working-class people — where I come from in Pennsylvania, the places I come from in Delaware — I have great support. I have support across the board, and I’m not worried about taking on Donald Trump at all. And with regard to the economy I can hardly wait to have a debate with him.

Where I come from — the neighborhoods I come from — they’re in real trouble: working-class people and middle-class people. When the middle class does well, [the] working class has a way up and the wealthy do well. But what’s happening now: they’re being clobbered, they’re being killed. They now have a situation where they [believe] — the vast majority believe — their children will never reach the stage that they reached in economic security.

I love that [economic] debate because the American public is getting clobbered. The wealthy are the only ones doing well. Period. I’m looking forward to the economic debate.

But on December 27, Breitbart News reported;

Data from the Federal Reserve Bank of Atlanta shows that for the lowest wage earners, Trump’s “Buy American, Hire American” economy has delivered the quickest rate of wage hikes in more than a decade.

In November, the bottom 25 percent of wage earners saw their wages rise 4.5 percent compared to November 2018. These bottom-tier workers, those earning less than all other Americans, have secured a labor market that now resembles the labor market of top-tier workers — a result of less low-skilled foreign competition against Americans through increased interior immigration enforcement.

President of the Mooyah Burgers restaurant chain, Tony Darden, told the Wall Street Journal that the tightening of the labor market has forced wages up for his employees:

“The effective labor pool is smaller than what it has been in the past,” said Tony Darden, Mooyah’s president. “As you look to bring on folks, ultimately higher wages are used to attract them.” 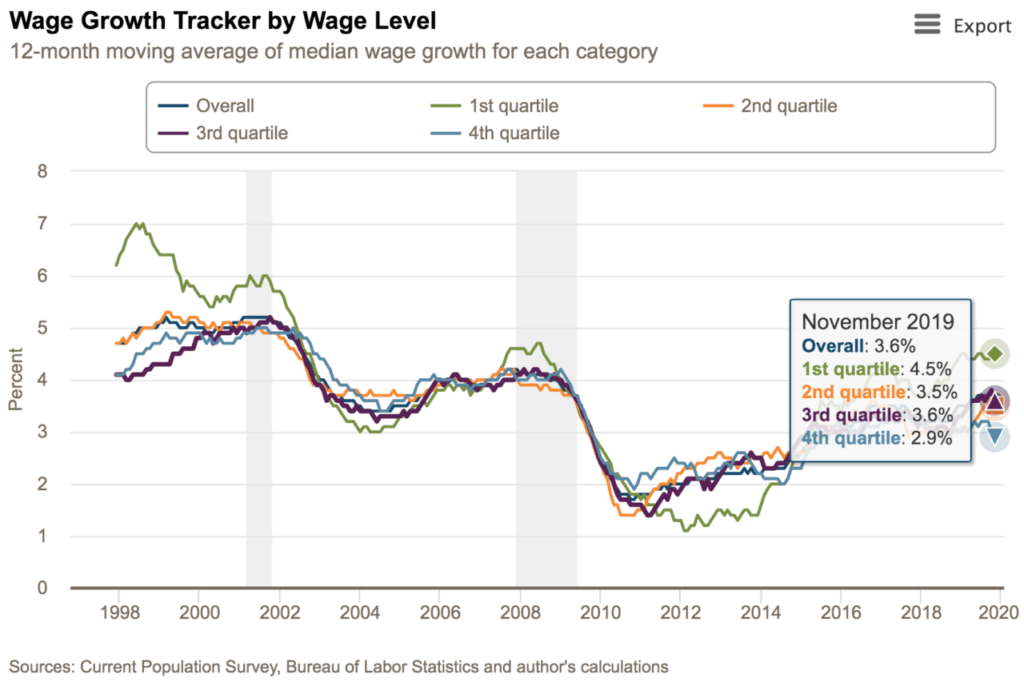 Wages for blue-collar Americans rose by 4.3 percent in 2019 — or 2.7 percent after inflation — in President Donald Trump’s tightening labor market, according to a December report by Goldman Sachs.

The wage gains come amid very low inflation of just 2.1 percent in December.

But salaries for college graduate Americans are growing much slower than for Americans who are working in transportation, restaurants, services, construction, and sales, according to federal data. They are rising slower amid the bipartisan policy of inviting roughly 1.5 million foreign graduates to take the jobs needed by U.S. graduates.

Blue-collar wages are rising faster than white-collar salaries because of different demands from employers, said Tom Donohue, the CEO of the U.S. Chamber of Commerce. “White-collar wages have been moving up over time, a bit, and the demand there, because of technology and other things, is not as high as the demand [for blue-collar skills]. … It’s a reality of the market,” he said January 9.

But Biden wants to increase the flow of foreign workers who will reduce wages for Americans.

“Biden will work with Congress to first reform temporary visas to establish a wage-based allocation process and establish enforcement mechanisms to ensure they are aligned with the labor market and not used to undermine wages,” said Biden’s plan for legal immigration. “Then, Biden will support expanding the number of high-skilled visas and eliminating the limits on employment-based visas by country, which create unacceptably long backlogs,” the plan says.

Joe Biden's immigration plan promises to multiply the flow of foreign graduates into US grads' job market.
That's great news for investors.
So will US grads try to defend their class interests in lower immigration & higher salaries?
Probably not.https://t.co/9uTj1MLxv5