“This was the worst jobs report of the year and a clear indictment of President Biden’s failed policies,” the President and CEO of the Job Creators Network, Alfredo Ortiz, said in a statement on Friday, shortly after the job numbers were released. 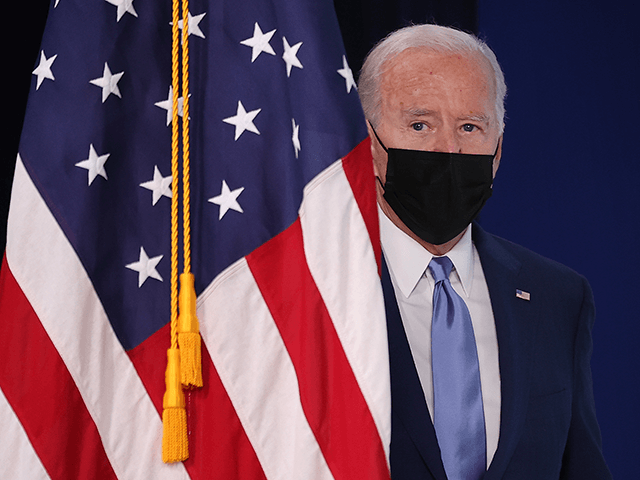 U.S. President Joe Biden takes the stage before delivering remarks on the September jobs numbers in the South Court Auditorium in the Eisenhower Executive Office Building on October 08, 2021, in Washington, DC. According to the U.S. Labor Department, the economy added a disappointing 194,000 jobs in September as the COVID-19 Delta variant negatively impacted the usual annual hiring patterns. (Photo by Chip Somodevilla/Getty Images)

“Even the termination of Biden’s overly-generous unemployment benefits – which kept workers on the sidelines for almost half a year – failed to stimulate job growth because Biden’s agenda is wrecking small businesses,” Ortiz added. “Higher taxes, vaccine mandates, record spending triggering rapid inflation – this is all part of Biden’s ‘War on Small Business.'”

The jobs report from the Labor Department was released on Friday, showing the disastrous report for Biden. The U.S. economy only added 194,000 jobs in September, along with the unemployment rate only falling by 0.4 percent (4.8 percent total).

“The sluggish pace of jobs created surprised experts again, as they predicted about 500,000 jobs created, but the economy fell short again,” Breitbart News’s Charlie Spiering noted. “The jobs numbers were expected to rise significantly in September, as expanded unemployment checks from the federal government expired.”

Additionally, the labor force participation went down slightly in September as well, 61.7 percent from the 61.8 percent in August.

Overall, the poor jobs numbers show that the U.S. economy is not back to normal, considering some of the industries performed even worse than in August.

The Job Creators Network has been trying to highlight Biden’s war of small businesses by having a national bus toured — Bring Small Businesses Back Bus Tour — to promote pro-growth policies as an alternative to Biden’s “failed policies.”