President Joe Biden’s deputies have invited roughly 570,000 migrants across the southern border since January, amid a worldwide epidemic and economic crisis, according to federal data leaked to the Washington Post.

The Biden migration was boosted by lax border security which allowed at least 450,000 additional migrants to sneak across the border. Many of those so-called “got-aways” were allowed to make repeated, unpunished efforts to sneak past the thin screen of distracted border guards.

The inflow of roughly 1 million job-seeking, wage-cutting migrants was hidden under a record-breaking total of 1.7 million official “encounters” with migrants at the border, according to the Post‘s article, “Historic data shows fiscal year 2021’s figure was the highest total ever recorded.”

Border officials have the legal authority to exclude nearly all migrants. But Biden’s progressive deputies have instead welcomed roughly 39 percent of the 1.7 million poor migrants, even as many other unlucky migrants die on the trail to the border or get sent home deep in debt to the smugglers.

Many agencies leak information to the Washington Post to influence national media coverage. In this case, the record-breaking border arrivals of 1.7 million were finally leaked mid-month as Democratic leaders announced details of their record-breaking plan to spend almost $2 trillion — or $2,000,000 million — to expand government services. Much of the new spending is aimed at poor people who have been made poor by the governments’ immigration policies.

The inflow of at least 1 million migrants delivered roughly one migrant for every 3.5 births in the United States during 2021.

The inflow is in addition to the Biden administration’s choice to revive legal immigration — roughly 1 million per year — and the inflow of foreign temporary workers holding H-1B and other work permits. All told, Biden’s deputies likely imported 2 million foreigners into the United States, even as tens of millions of Americans are struggling to find good jobs, pay for homes or rent, and to persuade politicians to vote in their pocketbook interests.

CBP Officers and Border Patrol agents encountered nearly 1.96 million migrants nationwide during FY21 which ended on September 30, according to a highly placed source operating under the umbrella of the Department of Homeland Security. A document from the agency reviewed by Breitbart Texas revealed the record-breaking level of migrant encounters along the U.S.-Mexico Border.

Of the nearly 1.96 million migrants encountered, more than 1.66 million, a new record for Border Patrol, were migrants apprehended by U.S. Border Patrol agents at the southern, northern, and coastal borders. This represents an increase of 310 percent over the previous year’s 405,000 migrants.

Most of the legal immigrants, visa workers, and illegal migrants settle in coastal states. This federal inflation of the coastal labor force minimized the economic incentive for investors to create new jobs and wealth in the heartland states, such as Kentucky, West Virginia, or Ohio.

The government’s policy of extracting economic migrants from poor countries also shifts wealth from ordinary Americans to investors. Fort example, the stock market has grown by roughly one-quarter in 2021, partly boosted by Biden’s inflow of low-wage workers and extra government-aided consumers. Roughly 90 percent of stock value is held by the wealthiest 10 percent of Americans, according to CNBC.com.

Once in office, Biden quickly halted construction on the border wall, ended the “Remain in Mexico” policy, reversed key asylum restrictions and announced a 100-day pause on most deportations and enforcement by U.S. Immigration and Customs Enforcement.

Biden officials initially blamed the previous administration’s policies for the increase in border crossings and said migration pressures intensified as a result of the pandemic’s economic fallout. Many migrants have told reporters they opted to make the risky journey north, at great cost and considerable danger, with the belief that Biden would allow them to stay. A tight U.S. labor market became another pull.

Biden’s border deputy is Alejandro Mayorkas, a pro-migration zealot who arrived in the United States from Cuba in 1960. Mayorkas is now working to import many more migrants via questionable legal loopholes, such as expanded asylum rules, amid little pushback from the establishment GOP. 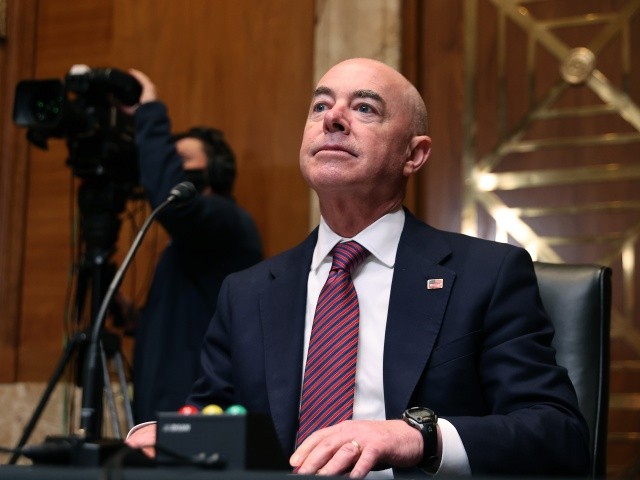 Homeland Security Secretary Alejandro Mayorkas prepares to testify before the Senate Appropriations Subcommittee on Homeland Security in the Dirksen Senate Office Building on Capitol Hill on May 26, 2021 in Washington, DC. (Photo by Chip Somodevilla/Getty Images)

The donor-funded GOP leaders prefer to downplay the pocketbook impact of migration on Americans’ communities. Instead, they try to steer voters’ concerns towards subsidiary non-economic issues, such as migrant crime, the border wall, border chaos, and drug smuggling. For example, on October 20, the National Republican Congressional Committee lightly criticized Biden’s migration, saying:

The data plainly shows the Biden Administration created a border crisis and Democrats have done nothing to fix it. Meanwhile, migrants continue to stream across the Southern border in droves.

The committee manages the GOP’s effort to elect more Republicans to the House. But it is heavily funded by business groups that want more imported workers, consumers, and renters.

GOP politicians do vigorously oppose amnesties and other legal immigration proposals that would import more Democratic-leaning voters and so threaten their ability to keep their jobs in Congress.

Overall, the federal acceptance of legal and illegal immigration is a pro-establishment economic policy that extracts migrants for use in the U.S. economy, but which is pitched as a national moral obligation, regardless of Congress’ laws, or the harm done to Americans, migrants, and their home societies.

A wide variety of pollsters have shown deep and broad opposition to labor migration and the inflow of temporary contract workers into the white-collar jobs sought by young U.S. graduates. This pocketbook opposition is multiracial, cross-sex, non-racist, class-based, bipartisan,  rational, persistent, and recognizes the solidarity that Americans owe to each other.

#prop47 has created a new phenomenon of outdoor, open air drug use on our city streets where addicts have no fear smoking Crystal Meth in front of you or your kids. #LosAngeles – 8th and Vermont pic.twitter.com/drHXG9zt2W

I’m tearing up over this. Isn’t it tragic? She’s so lovely, her kids too. I thought she looked familiar. @hikujackson interviewed Trish last lockdown. https://t.co/4WruhyYPCB