The revelation comes just after the House delayed floor debate on the EAGLE Act, which seeks to accelerate the government delivery of green cards promised to Indian H-1B visa workers by Silicon Valley investors, the Fortune 500, and their many subcontractors.

But the investor-backed EAGLE Act also includes a sneak plan that would let U.S.-based employers offer the huge prize of lifetime U.S. work permits to an unlimited number of foreign workers. Those dangled work permits would be swapped by companies to many foreign workers in exchange for a few years of cut-rate blue-collar or white-collar service.

The EAGLE debate was again delayed on Wednesday because Democratic legislators are divided over the corporate giveaways.

The House's green card giveaway bill to Silicon Valley elites and the Indian outsourcing lobby could have devastating consequences for Trump's "America First" agenda if passed in the Senate. https://t.co/x2m5ZaDhxE

The 281,000 number is another problem for the bill’s champion, Rep. Zoe Lofgren (D-CA) because the Indian contract workers were the biggest winners of the 2022 giveaway.

That five-fold spike of green cards for Indian contract workers and their families deflates the EAGLE Act’s public argument: That the bill is needed to help the many Indian workers who have overloaded the federal “country cap” process for sharing green cards with nations around the world. 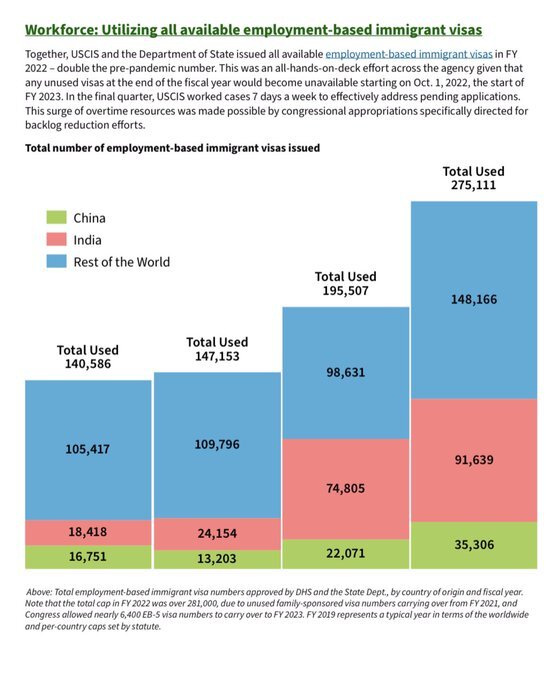 DHS boasted about the huge corporate giveaway on December 7, which was achieved because the agency converted green cards for family migrants into visas for corporate migrants:

Backed by crucial fiscal support from Congress, USCIS [U.S. Citizneship and Immigration Services] restored fiscal stability and turned the tide on backlog growth …. [and] in coordination with the Department of State, the agency utilized more than 281,000 employment-based visas, twice the typical statutory annual allotment. This was made possible due to the large number of family-sponsored visas that remained unused in FY 2021 as a result of the COVID-19 pandemic.

The EAGLE Act bill is being pushed by Lofgren and is backed by tech investors in her district who recruit foreign workers with the dangled promise of green cards and renewable work permits.

The investors want to import more cheap visa workers to inflate their stock prices and to keep their workers compliant. The foreign workers also help the California investors to keep their worksites in-state, instead of hiring Americans in distant, lower-cost states.

The five-fold increase for Indian workers under President Joe Biden happened while many U.S. companies continued to hire many foreign visa workers — and to fire tens of thousands of American graduates.

The tech layoffs have a broad impact. Each unemployed U.S. graduates tend to apply for jobs in related fields, so pushing other American graduates out of many varied job opportunities.

A whopping 4.9 million illegal immigrants have crossed our border since Biden has taken office, a report from the Federation for American Immigration Reform (FAIR) found. https://t.co/Oouk9xkrs7

That layoff number is roughly equal to the number of foreign workers who g0t green cards from DHS in 2022.  The higher 281,000 number announced by DHS includes the employees and family members, which typically amounts to half the yearly total.

The wave of layoffs and rejections is hitting young Americans hard, and is delaying — or denying — them a critical first step on the career ladder. The New York Times reported on November 6:

Rachel Castellino, a statistics major at the California Polytechnic State University, worked to land a job at a major tech company. During college, she interned as a project manager at PayPal, received a data science fellowship funded by the National Science Foundation and founded a data science club at her school.

Ms. Castellino, 22, knew she would have to grind to pass companies’ technical interviews, which typically involve solving programming problems. Last year, she spent much of the fall job hunting and preparing for coding assessments. For four days a week, from 8 a.m. to 4 p.m., she studied probability concepts and programming languages. Even so, she said, the interview process was brutal.

In November 2021, Meta offered her a job as a data scientist, starting in December 2022. Last month, Meta rescinded the offer, she said.

Federal rules allow companies to hire visa workers regardless of how many qualified Americans want the job.

Amid the layoffs, Biden’s deputies continue to print work permits for foreign workers — and even to open more opportunities for U.S. employers to hire foreign graduates in place of Americans.

For example, on Tuesday, Biden visited a new factory in Arizona for manufacturing critical computer chips. But the Taiwan-based firm, TSMC, is using DHS’ visa worker programs to hire cheap foreign workers for entry-level jobs at the plant, according to guestworkervisas.com.

The site uses government data to display companies’ requests to import foreign graduates via the visa worker programs. For example, the site shows that TSMC is seeking to hire 35 foreign tech workers, Ten of those jobs pay less than $77,000. 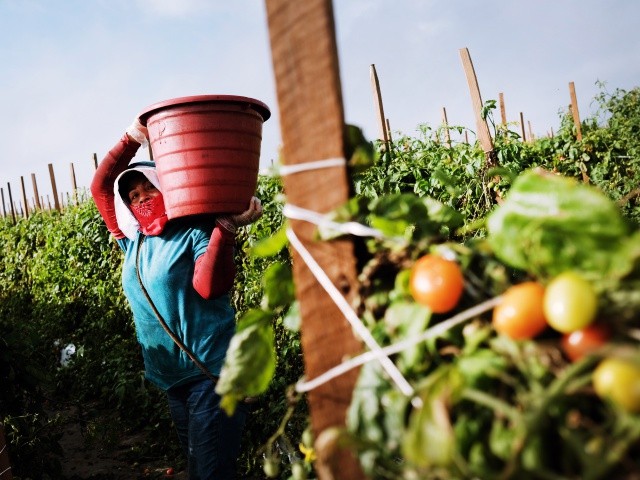 File/Workers pick tomatoes at a farm owned and operated by Pacific Tomato Growers on February 19, 2021 in Immokalee, Florida. The workers, who are in the country on an agricultural visa, are mostly from Mexico.  (Photo by Spencer Platt/Getty Images)

Nationwide, Fortune 500 companies, their subcontractors, other firms, and universities employed roughly 1.5 million visa workers in jobs that could otherwise be accomplished by American graduates. A 2021 study by the Census Bureau reported massive underemployment among U.S. graduates amid the replacement-level inflow of visa workers:

The vast majority (62%) of [American] college-educated workers who majored in a STEM [science, technology, engineering and math] field were employed in non-STEM fields such as non-STEM management, law, education, social work, accounting or counseling. In addition, 10% of STEM college graduates worked in STEM-related occupations such as health care.

But Fortune 500 executives prefer to hire visa workers for many jobs.

Another site, MyVisaJobs.com, also uses government data to show the corporate hiring of visa workers. The site also shows widespread corporate use of green cards as a substitute for fair-market wages in white-collar and blue-collar jobs.

The companies can import foreign workers regardless of how many qualified Americans are eager to do the job.

Immigration lawyers saying so as much:

“Our goal is clearly NOT to find a qualified US worker…our objective is to get this person a green card…so certainly we are not going to find a place where applicants would be most numerous.”pic.twitter.com/MBTT0Mwy5R

Many of the Fortune 500’s subcontracting firms — dubbed “body shops” prefer to hire visa workers at cut-rate wages instead of young American professionals.

The pending bill would dramatically raise the number of indentured workers because it allows companies to recruit foreign workers at low wages — but also pay them the deferred bonus of renewable work permits after several years. The “green card lite” or “work-for-work-permits” language is hidden in Section 7 of the bill — and it would likely flood the labor market for the young, swing-voting American graduates who prevented a GOP blowout in the 2022 election.

In 2017, CNN interviewed one of the indentured contract workers:

“I do not even have money to buy tickets,” he says.

He says he feels lucky, though. At least he is not in a “guest house” waiting for work.

The replacement of free-speaking American professionals with indentured foreign labor also allows executives to discard important civic priorities. These priorities — such as security, privacy, and durability of high-tech infrastructure — are sacrificed to lower costs and raise stock prices. The resulting damage was exposed by losses at Intel, and Boeing, and by the bankruptcy and jailings at Theranos.

But the imported Indian workplace culture is increasingly dominant in U.S. Fortune 500 companies, in part, because it matches the ruthless worldview of Wall Street investors, one U.S. worker told Breitbart News. “The fact of the matter is, the people on Wall Street don’t care — they want the bottom line.”

Dice.com collects data on technology workers’ salaries. In January 2022, the site’s owners showed that U.S. tech workers’ wages had dropped in value from 2009 to 2021 because inflation had exceeded their wage gains.

The @Walmart headquarters in Bentonville, #Arkansas has become a hot bed for "cheap" labor foreign import from one country – India. Corporations like Walmart abuse the H-1B visa program to bring in cheaper white-collar workers, while laying off qualified American workers #Walmart pic.twitter.com/mySGDWmGxp

The pre-inflation salaries in the tech sector rose from $78,845 in 2009 to $93,244 in 2018 and $104,566 in 2021. But that shows a slight decline of 0.3 percent according to the inflation calculator offered by the Bureau of Labor Statistics. As tech salaries stalled, tech investors gained trillions of dollars in extra value from escalating profits and stock prices.

Many polls show the public strongly opposes corporate labor migration into the jobs that Americans need for middle-class lives, homes, and families.