DUBLIN, Republic Of Ireland – For a thousand years Dublin Castle has stood as a testament to the Irish people’s Catholicism and later the (often thwarted) desire to oppose secularism or domination from English Protestantism.

What better place then to host the unedifying spectacle of “human rights activists” jeering those Irish constituencies that chose to vote against gay marriage. The event at Dublin Castle was supposed to be a neutral event for the public to watch the results, but it quickly became a pro-gay rights rally.

The unofficial ringmasters for the event were Senator David Norris who suggested the event might have a similar effect of the world as the Bolshevik revolution of 1917 had in Russia. He was joined by Sinn Fein boss Gerry Adams who was accompanied by an unrealistic transvestite called “Paddy”. 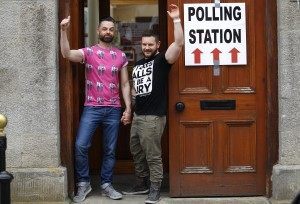 Mr Adams told Sky News: “I think this is a huge day for equality. I also think that given that the government parties were pressing quite rightly for equality in this issue then we need equality in other issues.

“We need equality in social issues, economic issues we need everything to be equality. So this is a hugely important day for the LGBT community and everybody else.”

However, there was little equality on show when the first area to vote against gay marriage was declared as Roscommon-South Leitrim. Despite the knowledge the area had only gone against them by 51 percent to 49, one onlooker was heard to say “they’re voting against the country, they’ll regret that”.

Another suggested the vote was “one in the eye for the Catholic church” a body once considered the cornerstone of Irish society. It seems that times have changed, or at least people were required to pretend they had.

Dublin Castle was not a place for anyone who opposed the mob, and vote no stickers had all but disappeared in Dublin by today. It had become socially unacceptable in Ireland to have a dissenting view on this important issue.

Those that fought for Irish freedom may be turning in their graves.