DUBLIN, Republic of Ireland – Today Ireland will become the first country in the world to legalise gay marriage through a referendum. On the face of it, this looks like a remarkable departure from the traditional Catholicism of the country, but in reality it’s just the latest example of how the country is turning its back on the church.

This is the third major referendum the Church has lost in the country: Catholics opposed the legalisation of homosexuality in 1993 and divorce in 1995. Since then relations between the Catholic Church and the Irish state have worsened as a result of child abuse scandals involving priests.

The Irish Republic no longer has diplomatic relations with the Holy See (Vatican City) after the Taoiseach, Enda Kenny, launched an attack on the Church over abuse. He addressed the Irish Parliament to suggest the Vatican was still trying to cover up abuse, a claim denied by Rome. 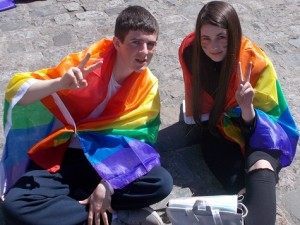 Victory for the pro-gay marriage camp.

As the results of the referendum were being broadcast in a big screen at Dublin Castle pro-gay marriage campaigners launched attacks on the Church. Amnesty International Ireland’s executive director Colm O’Gorman was angry the church suggested children might be harmed by gay marriage.

He said: “The church’s moral and political authority is fading in Ireland. After the child abuse scandals it did not have the moral authority to tell us what to do.

“It wasn’t credible for the Church to suggest that gay marriage was a threat to children. They also raised issues of surrogacy and adoption that were not relevant to today’s debate. In fact we think we got the support of many parents because they had to ask themselves what sort of an Ireland they wanted their children to grow up in.”

Senator David Norris (IND), told journalists at Dublin Castle that Pope Francis “wasn’t a bad fella, better than the last one but he is deluded on gay rights.”

Denis a 71-year-old Dublin Taxi driver claimed the last 15 years had seen an “explosion” of gay people into the public consciousness in Ireland. He said: “In my day there was no such thing as gay people in Ireland, but now everyone knows someone who is gay. Most of my friends are voting yes, I’ve seen a few people who are against the move on talk shows but they tend to be very old.”

As each county’s results were read out at Dublin Castle the mood of the crowd became increasingly jubilant. Those who opposed the constitutional amendment to allow gay marriage were not present.