The left-wing Madrid government is using its powers to erase memory of prominent conservatives celebrated in street names, by renaming them after gay rights activists. 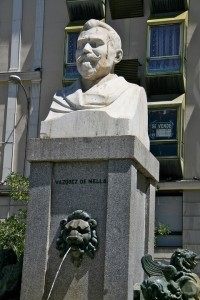 The city’s left wing council – the first Madrid has had in 24 years – wants to honour the recently deceased Pedro Zerolo. He was a lawyer and gay rights activist who served as the president of the Gay Collective of Madrid and the National Federation of Lesbians, Gays, Transsexuals and Bisexuals, and who was among the first people in Spain to take advantage of the gay marriage laws which he helped create in 2005. Zerolo died of pancreatic cancer last month, and now the city has approved proposals by his former Gay Collective to name a square after him.

As there are precious few new squares to bear his name, the city decided instead to rename the Vázquez de Mella plaza, named for conservative Catholic Carlist scholar and politician Juan Vázquez de Mella, one of a number of conservatives in Madrid presently set to be consigned to the rubbish bin of history. Although the plaza name signs will clearly have to be replaced, it is less obvious what will be done with the significant marble fountain that supports a bust of de Mella plaza, an architectural feature that dominates the square.

This will not have been the first time the square has changed its name, which has shifted depending on the prevailing political winds of the day. At its inception the square was called Plaza de Bilbao, after the coastal Basque city, but was renamed during the left-wing Second Spanish Republic for Manuel Ruiz Zorrilla, a radical anti-monarchist politician. It was briefly renamed Plaza Bilbao after the Spanish Civil war, but was changed to honour traditionalist Vázquez de Mella in 1944. The plaza is now in the heart of Madrid’s gay quarter.

Breitbart London reported in June that the then conservative People’s Party’s dominated council had voted to christen a large, unnamed square in the centre of the city after former British prime minister Margaret Thatcher. Councillor Fernando Martínez Vidal said of the decision that Margaret Thatcher was “one of the most relevant political personalities of the second half of the 20th Century, since she was the first woman to be prime minister of a European democracy, she won three general elections in the UK, and, together with Ronald Reagan and Pope John Paul II, achieved the fall of the Berlin Wall and the return of democracy and freedom to the European continent.”

One of the first acts of the new Madrid mayor Manuela Carmena was to announce that plaza Margaret Thatcher would be renamed, again after a figure from the LGBT world.