“You are not the people, you are the past,” was the message to German critics of mass immigration on Germany’s public broadcaster ZDF’s NEO MAGAZIN ROYALE television programme.

The message was delivered in a video featuring a multi-ethnic crowd of disabled, gay and transgender people, as well as a Muslim woman wearing a face veil and a man wearing traditional Saudi headgear, all telling a crowd of Germans that they are “not Germany”. 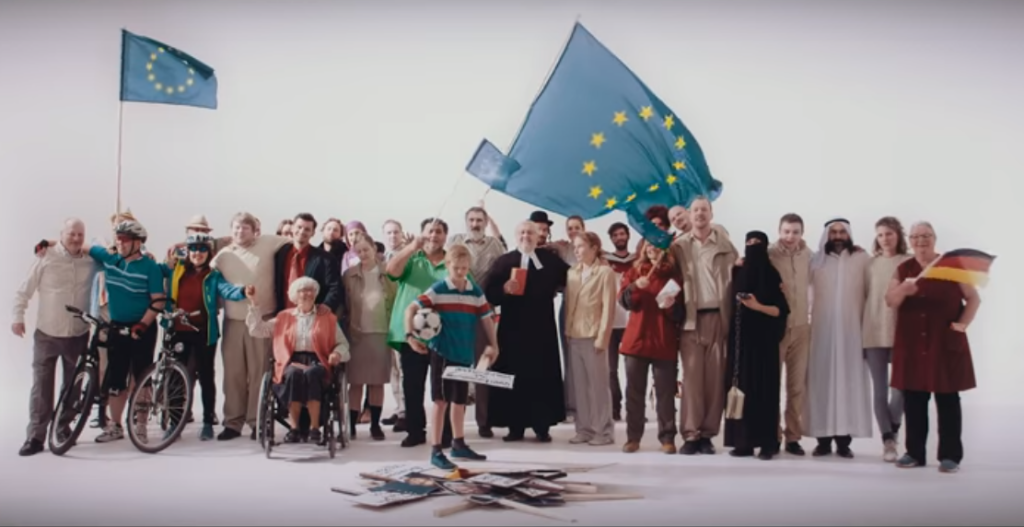 The video opens with a crowd of angry-looking white Germans hitting against the windows of a bus to intimidate a frightened Arab child and his father, a policeman dragging the child out and hurling him to the ground. Led by the German comedian and television presenter’Jan Böhmermann, brightly dressed people rise from graves, forming a crowd to combat the beige-clad Germans who are wielding Donald Trump placards and signs reading “Refugees not welcome.” 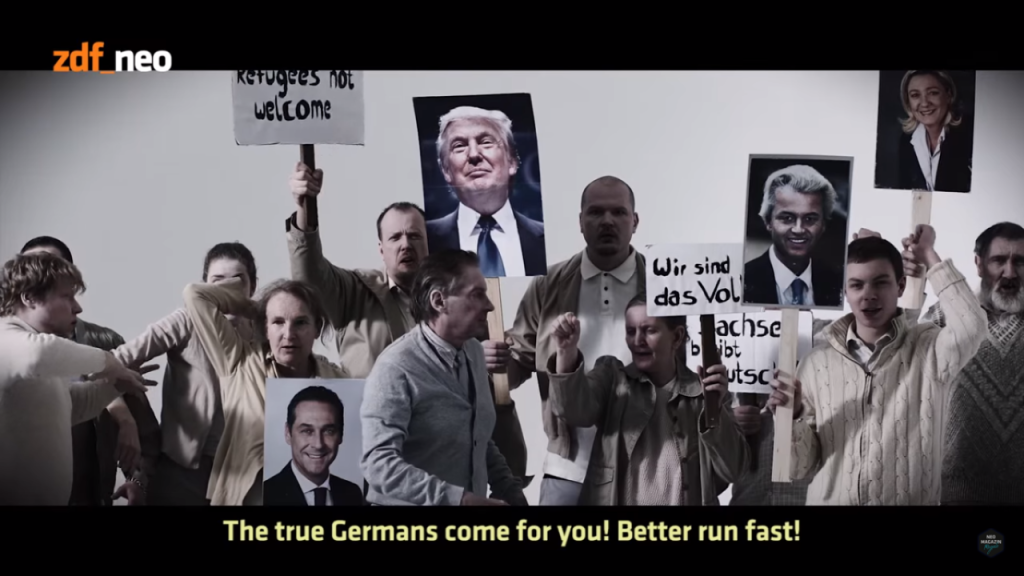 Condemning the German crowd as “authoritarian nationalist dorks” and telling them “you are not the people, you are the past,” Böhmermann cautions that “true Germans are coming for you, you’d better run fast.”

Warning the beige-clad Germans that “10 million bicycle helmets are in sight” Böhmermann describes the lifestyle of “true Germans” to be one of cycling, recycling and eating kebab and muesli. In what is perhaps a jab at protests from senior members of Merkel’s Christian Democratic Union against pork being “quietly removed from menus” of public canteens, Böhmermann also declares that the “true Germans” eat vegan sausages.

Lambasting the crowd — which holds placards featuring politicians critical of mass immigration, such as Eurosceptic Alternative for Germany’s leader Frauke Petry, the Netherlands’ Geert Wilders and France’s Marine Le Pen — Böhmermann rejects their calls for “strong leaders, fences and walls”. He explains that this is because Germans are “liberal”, “compassionate”,“temperate” and “peaceful” as the crowd on his side — which features a dog, a woman wearing a niqab, a man wearing a Saudi Arabian headdress and an elderly white woman in a wheelchair pushed by an African man — advances on the Germans protesting against mass immigration.

Showing politicians considered to be right wing, such as Hungary’s Viktor Orbán and Russian leader Vladimir Putin, edited to be wearing Donald Trump’s hairstyle, Böhmermann warns against “maniacs with wicked hair” stating that Germany has “been there”, and that such politics resulted in Nazi Germany.

As the young girl declares that because it’s 2016 “it is perfectly legal” for migrants to do “whatever the **** they want to do” because they are “******* human beings just like you and everyone else” the video shows the conservatively dressed Muslim man and the Jewish man smiling and shaking hands. There is also a white woman donning a purple hijab, a man dressed as a woman tearing his wig off, and even an elderly male Lutheran minister opening his robes to reveal lingerie and suspenders underneath.

As Böhmermann announces Germany is “open”, “multicultural” and “tolerant”, his crowd charges forward under a giant European Union flag shouting and hurling objects towards the white Germans, who flee as they are hit with food and books.

He lists what he says to be German values which includes “never forget”, referring to the Holocaust, and “diversity”. Bizarrely he also declares “freedom of speech” to be a German value despite the government’s policy of working with social media websites such as Facebook to censor criticism of migrants’ behaviour, and the obvious irony that the message of the video appears to be that critics of multiculturalism must be shut down.

Regardless of equipment, or radio and television usage, all households in Germany must pay a blanket fee of €215.76 per annum which funds public broadcasters ZDF and Deutschlandradio, as well as the nine regional broadcasters of the ARD network.