Rotherham Council has announced a new “diverse” panel to “advise” police on how to deal with “extremist” marches in South Yorkshire, kowtowing to local Muslims who rioted and threatened to boycott the police unless they were given more power.

The announcement comes days after the anti-Islamisation movement PEGIDA UK announced a walk through the town. Rotherham was terrorised by Muslim rape gangs for more than a decade with local cops paralysed for fear of being labeled ‘racist’, the government’s Jay Report found. 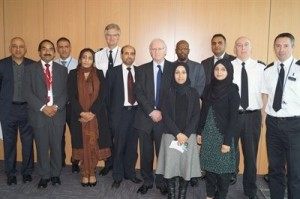 The new panel, which will effectively allow local Muslims to influence how they are policed, was first recommended in the Andrew Lockley and Imam Mohammad Ismail report from March of this year – a report described only as the “Lockley Report” by the BBC.

The Minority Communities Panel is an almost exclusively Muslim group.

The tax payer subsidised group describes its aims as: “[to] ensure the policies, procedures and practices of the Force meet the strategic aims of the Equality Diversity and Human Rights (EDHR) strategy and provide a safeguard against the service disadvantaging any section of the community through lack of understanding, ignorance or mistaken beliefs”.

According to the BBC, the Lockley-Ismail report was only commissioned after an all male, self-appointed group of Muslim ‘community leaders’ voted to boycott South Yorkshire Police and any Muslim businesses that that continued to co-operate with the force.

The boycott, which was instigated by a group calling themselves ‘British Muslim Youth’, was ridiculed on social media at the time. But it has proven to be very effective, winning local Muslims greater influence.

The group claimed Muslims had been “demonised” and “scapegoated” and claimed that “our women” have been “attacked” since the Muslim rape gang scandal was unearthed, largely blaming the police.

“We accept that we have made mistakes”, said a police spokesman when the boycott was announced in October last year, before confirming they were working “urgently to resolve this matter.”

South Yorkshire Police and Crime Commissioner Dr. Alan Billings commented of the new panel: “…In the future we don’t know what issues might be the subject of protests or where they might be in the county. This new panel with its diverse membership should be able to assist and advise when necessary.”

He added: “The members that have been appointed represent a cross-section of our communities from across South Yorkshire and I expect them to be able to bring knowledge and expertise to make recommendations regardless of the objective of the planned protests.”

The Sheffield Star, meanwhile, claims the new panel is being established after a review into trouble in September 2015, which found police had failed to anticipate a ‘change in mood’ in the town.

Following a peaceful, nationalist, ‘Britain First’ march in the town on September 5th, hundreds of Muslim men rioted outside the William Fry Pub, which they accused of having ‘far right’ sympathies.

The men had spent the day on a “Muslim Lives Matter” counter demonstration organised by trades unions and ‘anti racist’ groups.

Twelve men will face charges relating to the riot on October 2016 at Sheffield Crown Court. The Monitoring Group, a prominent so-call ‘anti racist’ group, has defended the men, claiming that:

“Given the background to the events and lawful right to self-defence, the 12 Asian men should never have been charged in the first place”, and demanding, “SELF DEFENCE IS NO OFFENCE: DROP THE CHARGES NOW.”

In February this year the first convictions for the grooming, rape and even torture of 1400 non-Muslim girls were made against three Muslim men from the town – years after police first became aware of the wide spread abuse.

The police watchdog is now examining almost 200 Rotherham policemen and women after corrupt officers, one related to the convicted groomers, allegedly conspired to protect the Muslim child sex gang.

Another officer is accused of having sex with an under-age girls, allegedly passing drugs to the grooming gang and tipping them off when colleagues were searching for missing children, a court was told.

Following the convictions, the police promised to increase patrols in Muslim areas as they were concerned about potential “Islamophobic attacks”, whilst also acknowledging that so-called ‘hate crimes’ fell in the town last year.