A “rainbow coalition” of progressives held an anti-Brexit picnic in London today, to “comfort” and “heal” each other, as well as “meet like minds” with whom that can “come up with solutions and proposals”.

“Let’s picnic together for the country we want — and share our feelings and ideas about where we’re at and what we should do next… Brexit threatens everything we hold dear,” read adverts for the event. 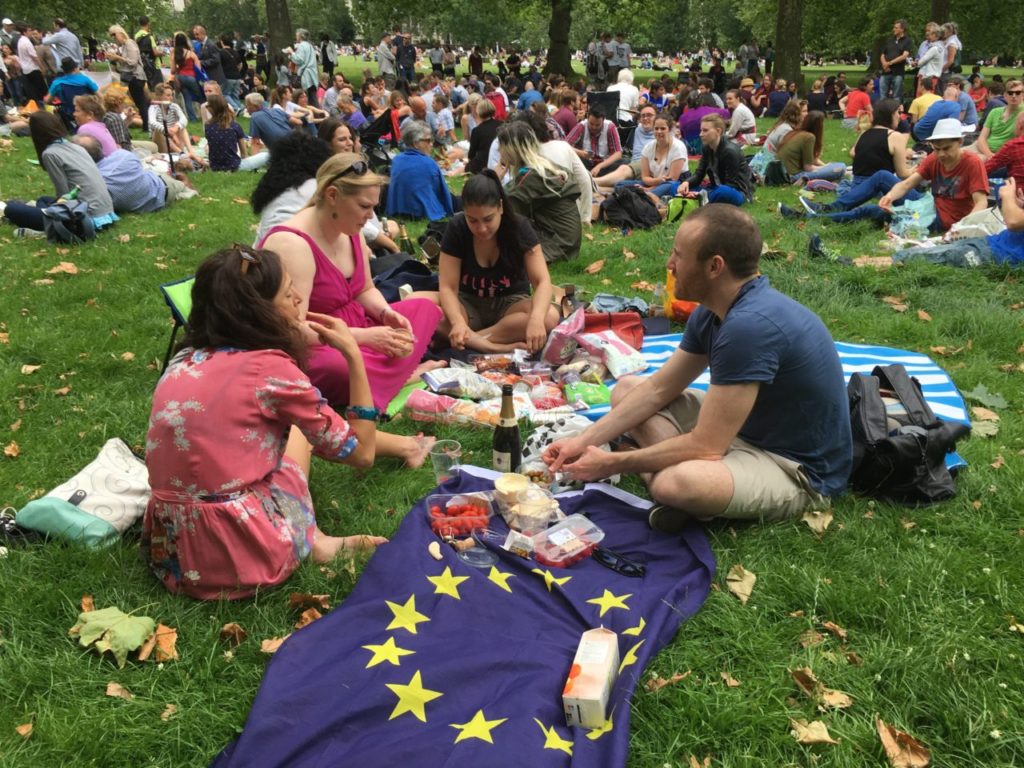 Strawberries and cream against democracy

The mournful tone of the dejected Europhiles was indeed brightened by the sight of Marks and Spencer meal deals and Pimms. However, these people are “the polite, modern face of totalitarianism” gathering to “crush democracy”, a counter-demonstrator told me.

A pro-Brexit, “Counter-Picnic For Democracy” turned up and boldly positioned itself in the middle of the gathering. Things, however, largely remained calm and amicable, despite the “divided nation” and “hate crime epidemic” we’ve heard so much about in the mainstream media.

The event was initially called, “MoreInCommon: Picnic against Brexit”, but was later changed to “Picnic to discuss Brexit”. “More In Common” were the words of the late Jo Cox MP, whose death many at the event blamed on the “right wing media” and “rhetoric” of the Leave campaign.

“Three cheers for Rainbow Britain!” at the anti-Brexit picnic in London today. pic.twitter.com/HiPmq2w6x1 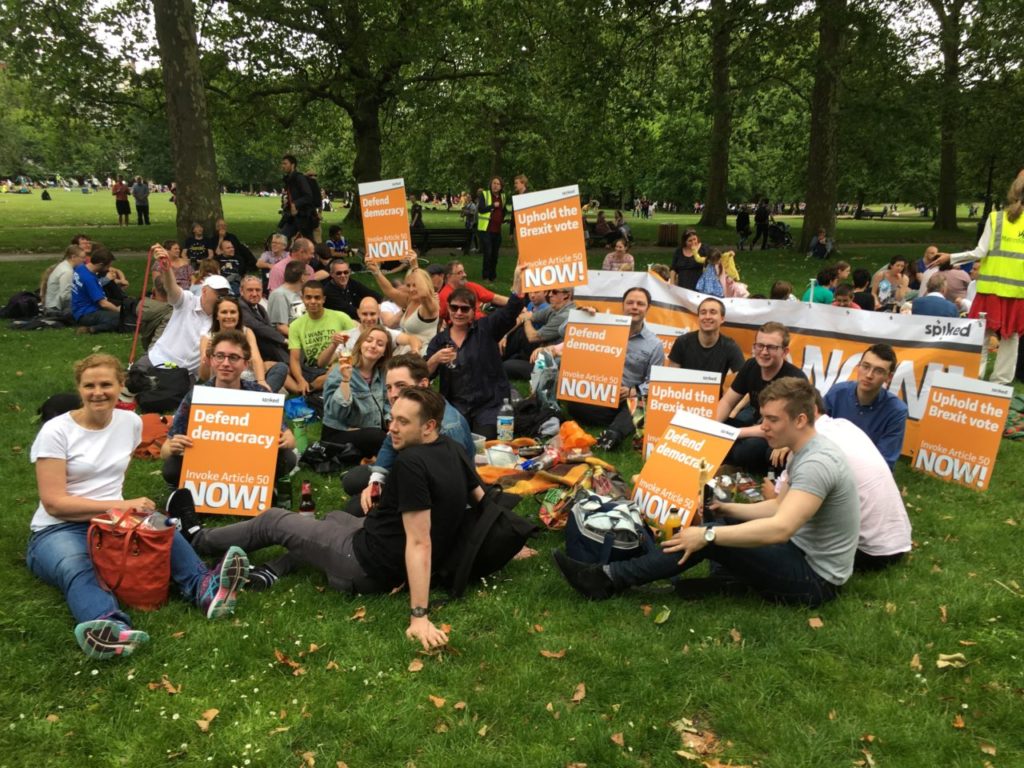 “It’s billed as a protest in favour of the EU, but at its heart, it is a protest against democracy,” said Blair Spowart, an organiser of the counter demo.

“Since the referendum, we’ve seen a climate of contempt for what the country voted for – for what the little people voted for. And this is what the protest today here is about,” he said.

“Speak to any one of them, they will tell you people were ignorant, they were duped, they were manipulated and apparently that’s why we should ignore the referendum result.” 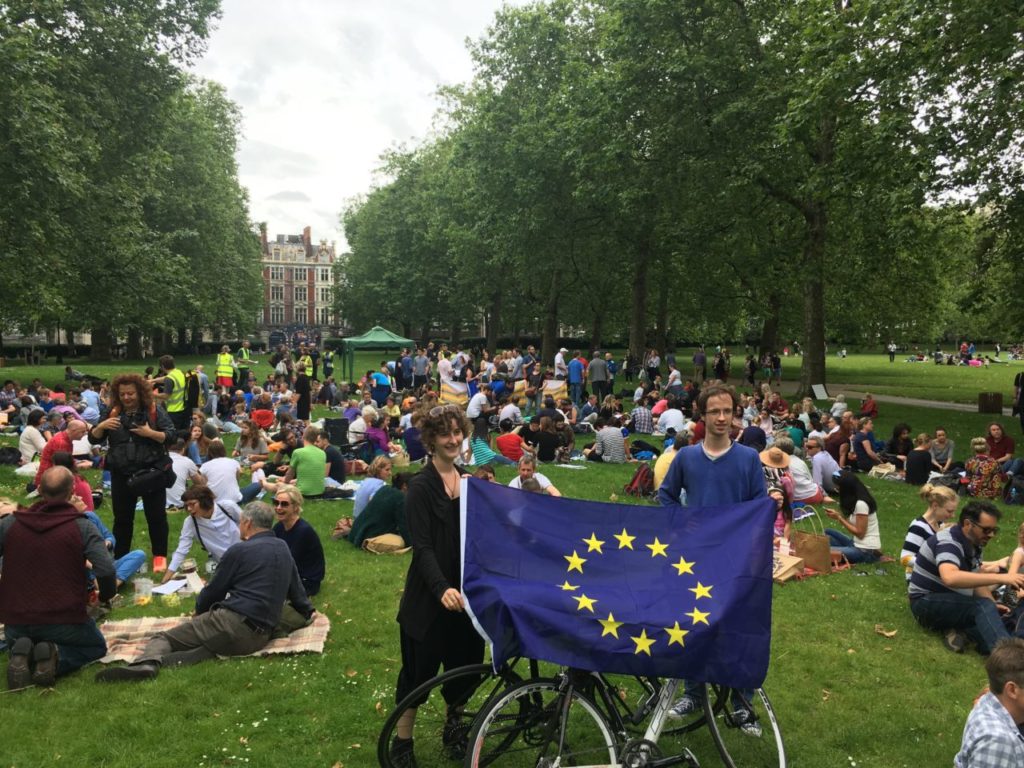 Donnach McCarthy, who was coordinating the anti-Brexit group over a loud speaker, said: “In any other circumstance I would have said, absolutely, [blocking Article 50] is an undemocratic thing to do.”

“But”, he added, “I think there are some serious reasons why in fact it is the democratic thing to do.” Because people were “uninformed” and that the “right wing press” held too much power, he said, “it was not a legitimate democratic exercise”.

“We don’t have a democratic press in the UK. It’s owned by five, European Union hating, tax haven based billionaires”, he said, claiming, “The people of the UK are the least informed about the EU in Europe.” 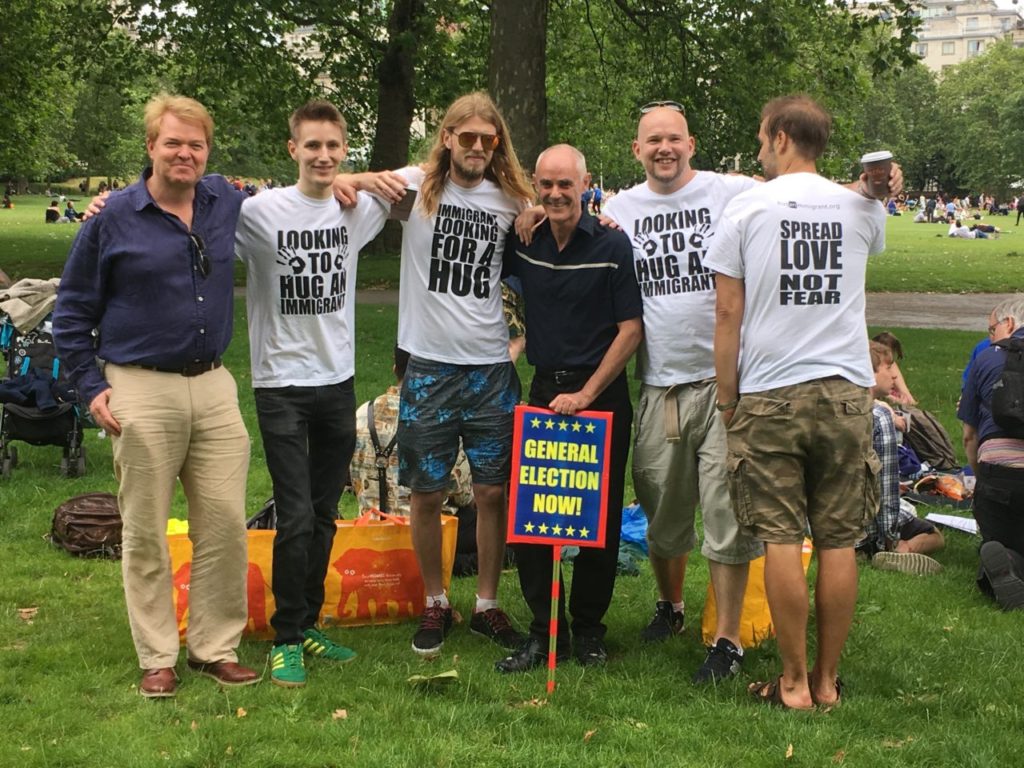 Donnach McCarthy, in the black shirt

He also insisted the “three million EU migrants living in the UK should have been given a vote” as well as “1.5 million 16 and 17-year-olds” because of the “huge impact of their lives”. “The older people only have a few years left”, he added.

The aim of the picnic, therefore, was “to bring people together… so they can come up with solutions and proposals”. His personal preference was “pressing on the parties in the next general election”.

“… There has to be a general election now we have a new prime minister, and it is legitimate to ask all of the progressive parties to stand in the general election and say ‘if you vote for us we will give you a vote on the final Brexit deal’

“… The Lib Dems have already done this, now we just need to get Corbyn too”, he added. 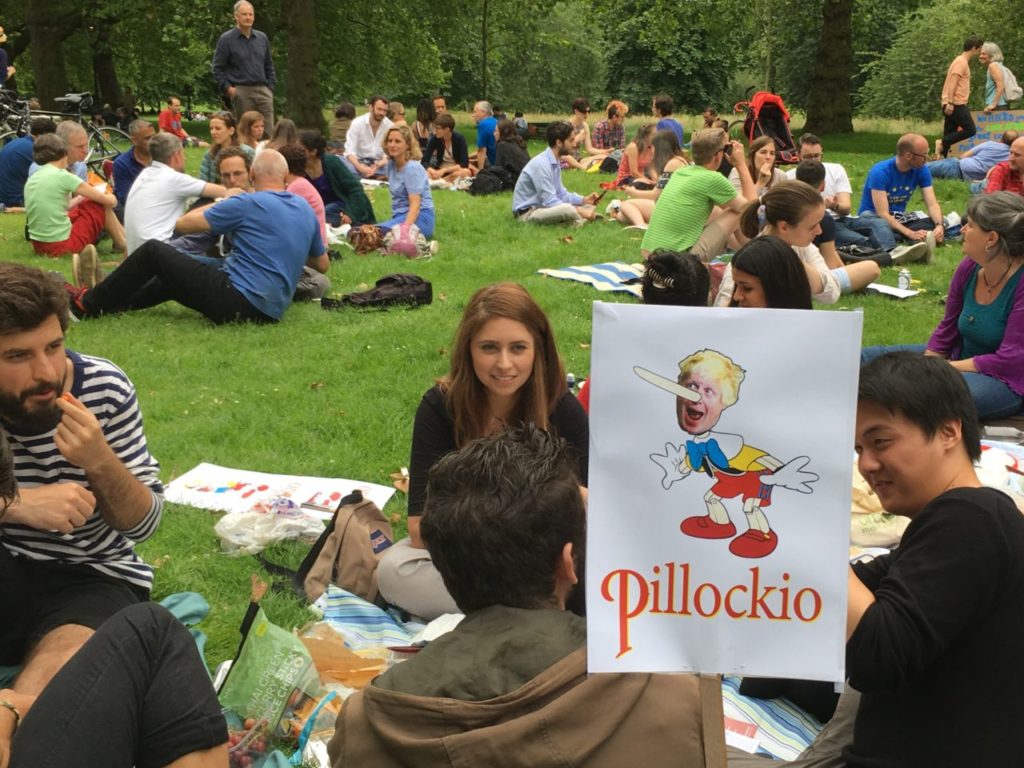 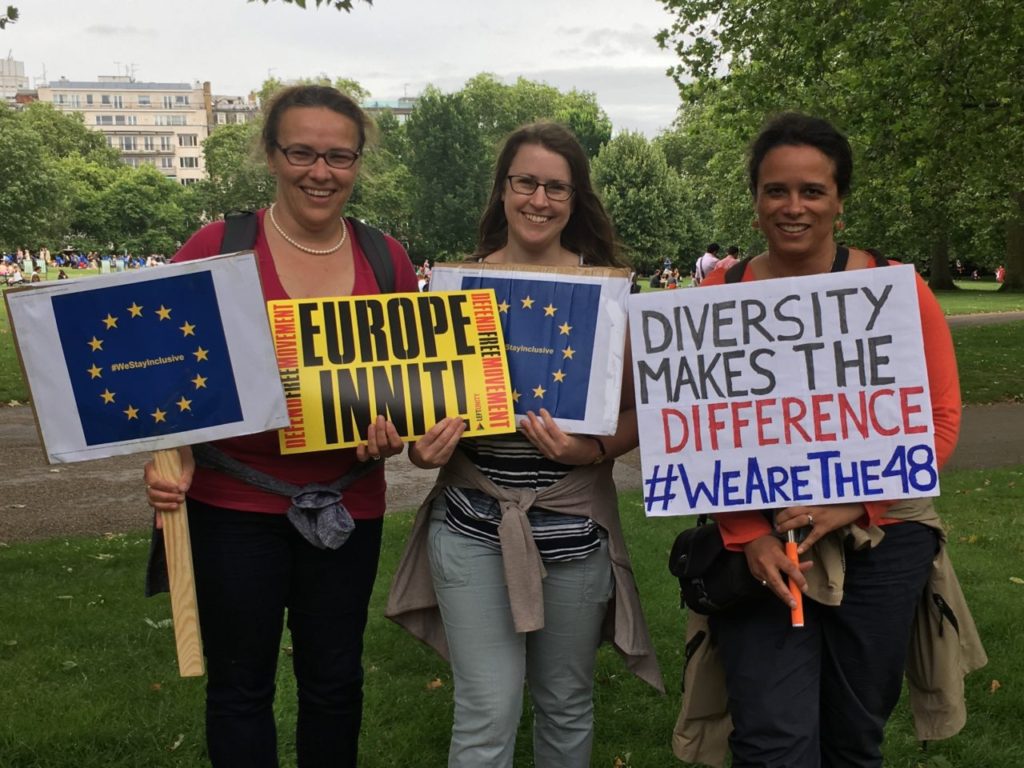 Mr. McCarthy said there was another purpose to the event, to help pro-EU Londoners “heal” and “comfort” each other after the Brexit vote.

“I have been seriously gobsmacked by the number of people who have been emotionally rocked to their core”, he said. “On the morning of the referendum I had a friend of mine… ring me in floods of tears”.

“… People are in shock, so this [picnic] is a way of gently healing and comforting… its kinda the usual process – anger, despair, and then acceptance and then action”, he said.

“I think this is a little bit strange, how these Remain voters have been going through the stage of grief”, said Tom Slater, from the “Invoke Article 50 NOW!” campaign, set up by the online magazine Spiked.

“I think we need to clear away all of that rubbish. For a very long time politics has been conducted on this ridiculous, over-emotional level. We can’t treat this as a situation of dread. It should be an opportunity”, he said.

“…Just because the existing order has been dealt a severe blow, that is a great thing, because democratic politics is uncertain and that means it’s exciting.” 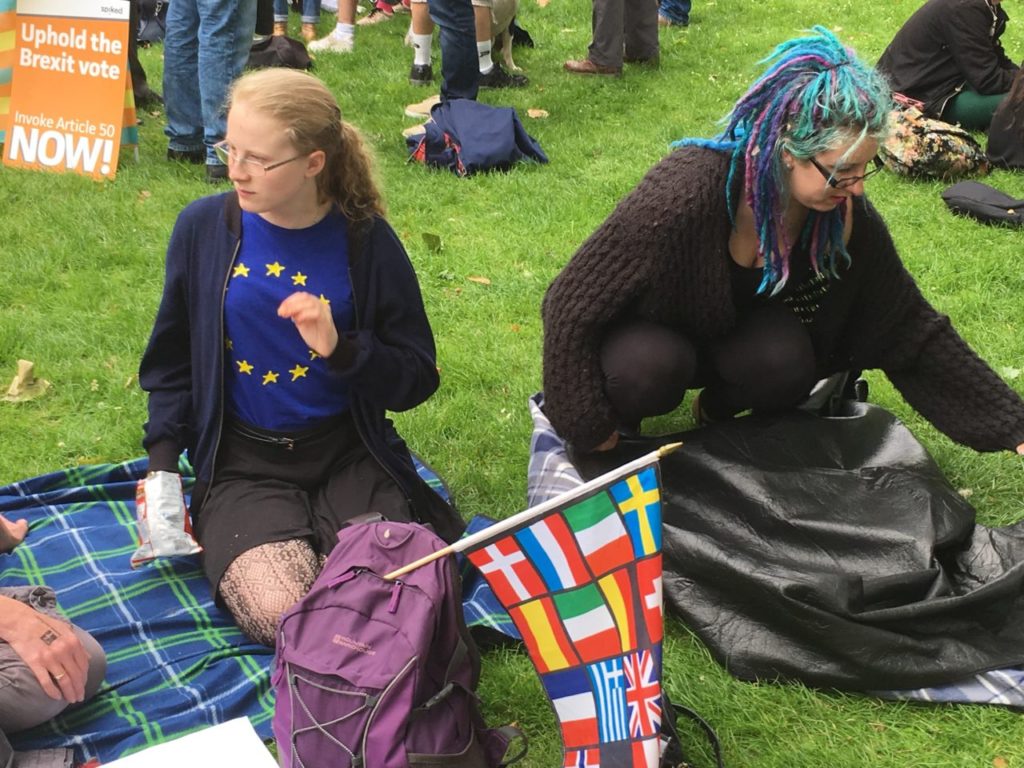 Revolutionaries for the status quo

Gail Bradrook, the media liaison officer for the event and a “revolutionary radical” told me that the EU was a “fascist organisation” and “profoundly undemocratic”. However, she voted Remain because of the “right wing media”.

“I think the fact that people have woken up and are feeling very anti-establishment is great, but I think that Leave campaign was dominated but a faction of the establishment, who don’t have their best interests at heart”, she said.

Ms. Bradrook thought that leaving the EU “in the long run” would be good, but “not now”, and said she would welcome a second referendum and a vote to remain. “The only problem now is inequality and discrimination, we need to tackle that first”, she said. 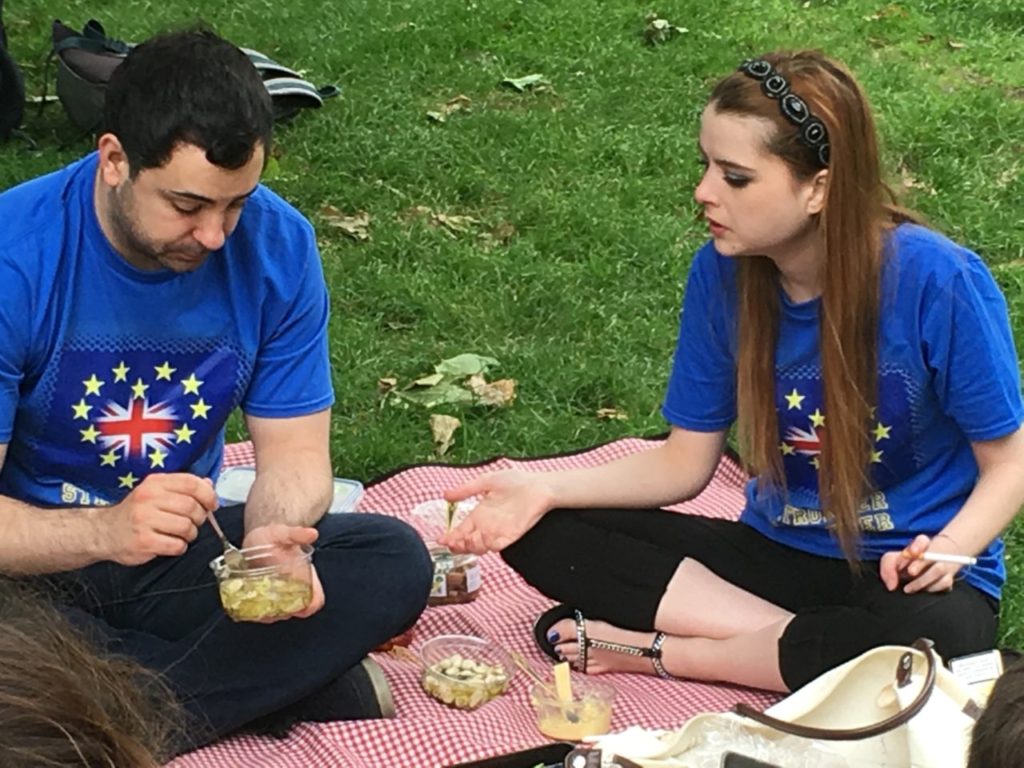 Fenton, may I have some more hummus please

“One of the things I’ve noticed, when you speak to the people here, is a lot aren’t that passionately for the EU”, explained Tom Slater. “They don’t speak about its great qualities and culture. They have attached themselves to it later because it is the opposite of change”.

However, the threat is genuine, and the prospect of such people over-turning the Brexit vote real. “There is a general belief among remain voters that there is a way they can stop this… and Brexit supporters need to come out and meet them”, said Mr. Slater. 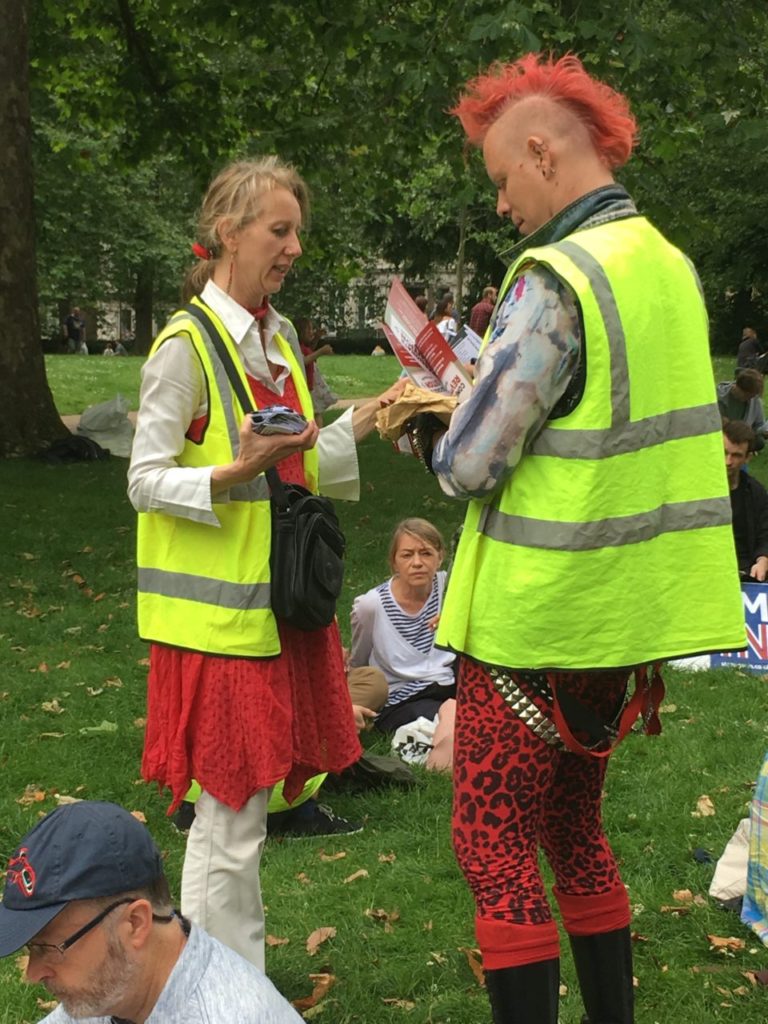 Gail Bradrook and a fellow “reolutionary” campaign for the “fascist EU” 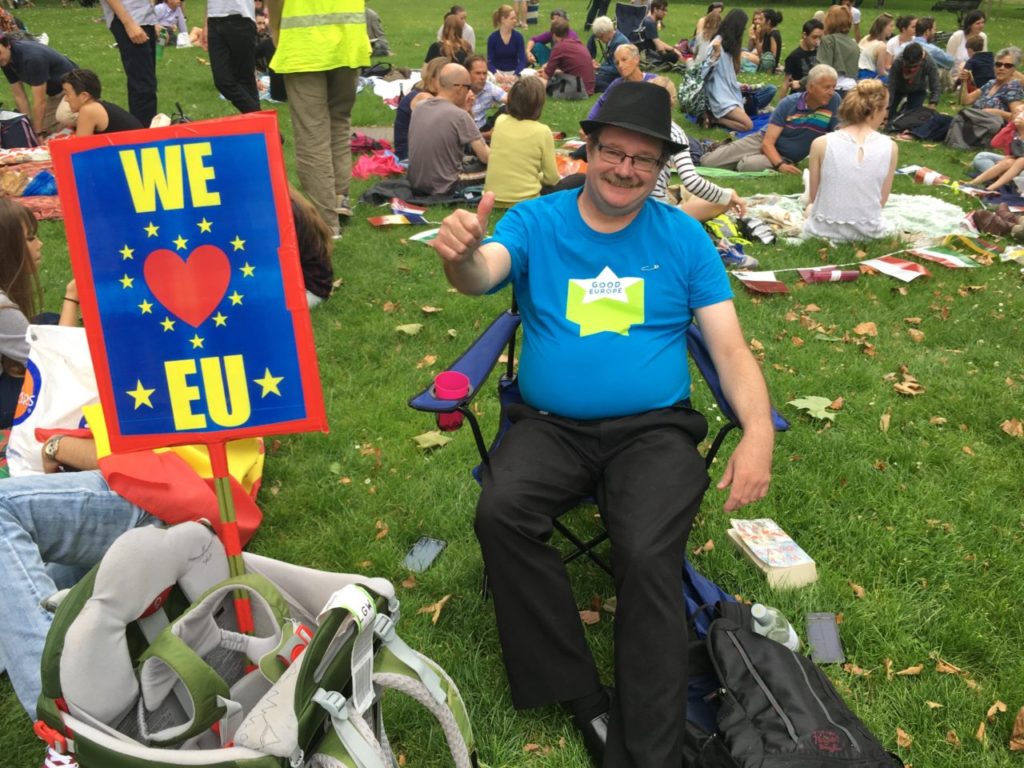 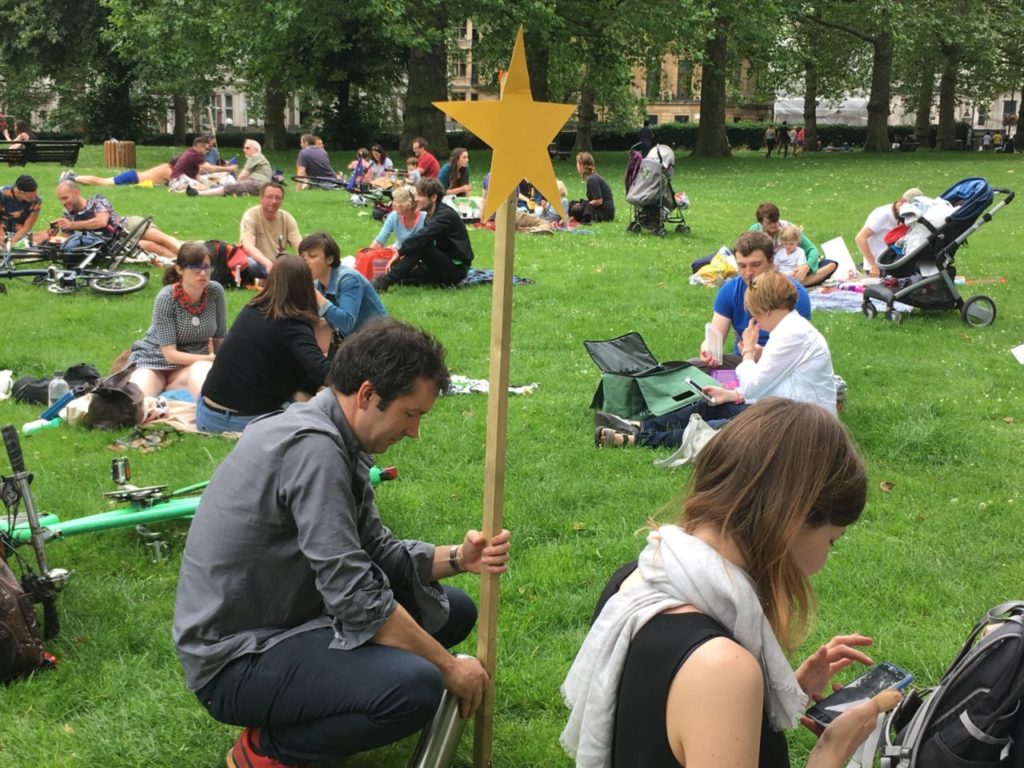 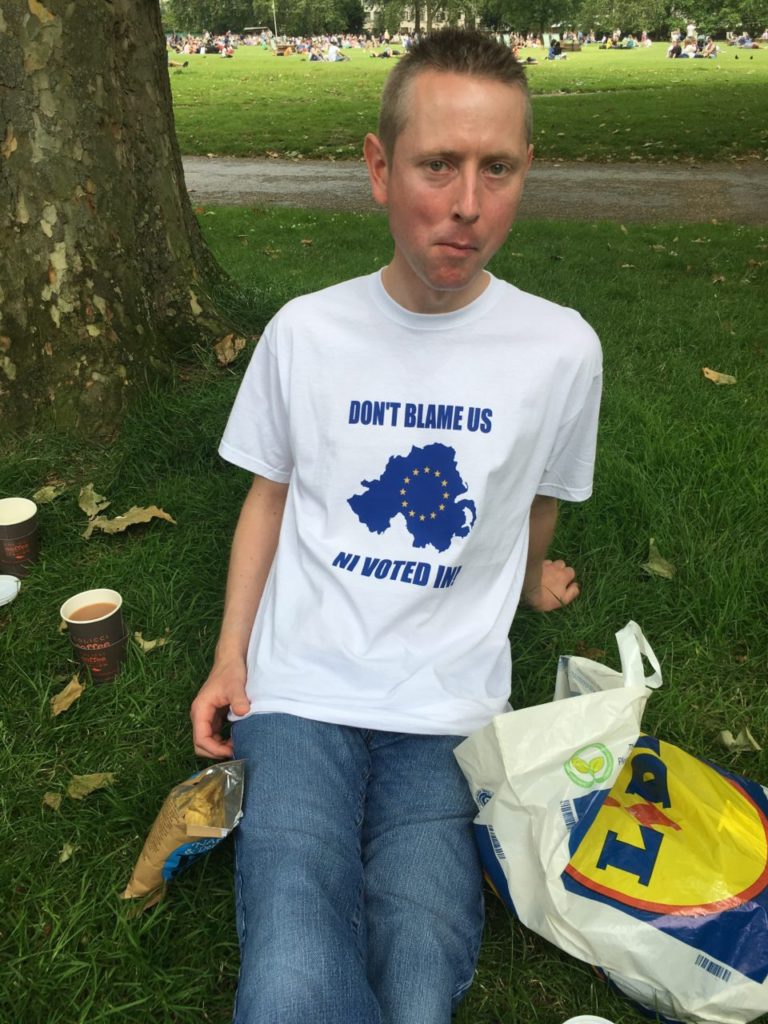 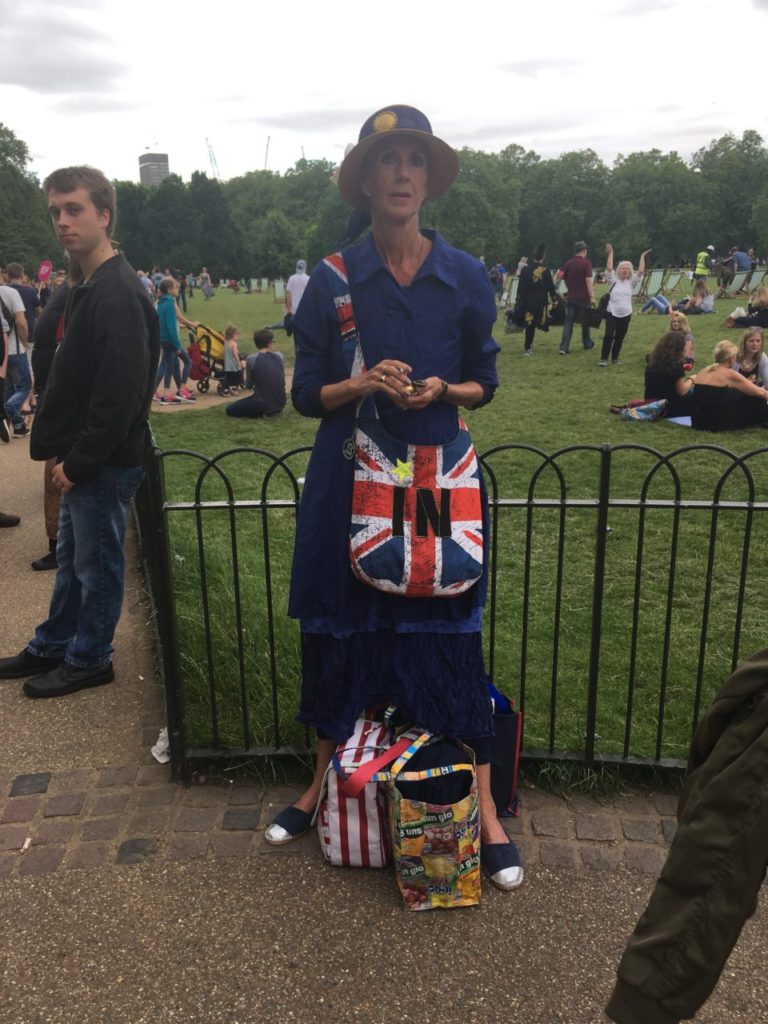