An Arctic expedition designed to raise awareness of the perils of man-made climate change is being frustrated by unexpectedly large quantities of ice.

The Polar Ocean Challenge, whose aim is to circumnavigate the Arctic in a sailing boat while the summer ice-melt allows, is being led by veteran explorer David Hempleman-Adams. He justifies the expedition thus:

Permanent irreversible change in the sea ice landscape of the Arctic seems inevitable. This will / is already having global economic political, social and environmental implications. A significant change in my lifetime.

I see this possibility to circumnavigate the Arctic as one I wanted to take despite the risks associated with it in order to increase the worlds attention on the effects of Arctic climate change. There may be a possibility still to curb this progressive warming and melting in the Arctic. But even if this is not possible the next most important thing is to at the very least highlight the need to ‘Navigate the Future of the Arctic responsibly’.

Well, yes, of course, David. That’s just the kind of eco-friendly blah which will have landed your expedition sponsorship from a City of London finance firm. But what if, as the real world evidence increasingly suggests, your prognostications of climate doom are flat out wrong?

Already the expedition is around 4 to 6 weeks behind schedule having been held up in the Laptev Sea by the kind of ice which experts like Cambridge University’s Peter Wadhams – of whom more in a moment – assure us will soon disappear permanently from the Arctic in summer.

Here, for example, is an entry from their August 18 ship’s log:

A Stamukha is an iceberg that is touching the bottom.

We had to turn round from the ice by the coast last night and find somewhere safe to moor/anchor. There were strong winds so we needed to find somewhere else to sit them out, and the answer was a stamukha.

We knew it might drift, and it did, so when it had drifted into a more dangerous situation, Ben (who was on anchor watch) woke Nikolay and we’ve moved off it to go and have a look at the ice situation just up ahead again

and here’s one from crew member Ben Edwards, who is 14 years old

We’re still running into ice, aaaagggghhhh!  We’ve had patches of clear water just large enough that you can’t see the other side, just large enough that you start to think maybe we’ve seen the last of the ice, and then it looms out out of the horizon like a piece of homework that you’ve been trying to avoid doing by moving to India only to find that school exists there as well.  Hmpf.  We’ve put in three new tracks today each one further south than the last in the vain hope that we’d finally escape the ice by running away from it.  Unfortunately it seems that ice is a vindictive substance and refuses to leave us alone.

Poor Ben. Like every other 14-year old in Christendom he has never lived in a period of global warming (it hasn’t happened for 18 years) but yet has been assured non-stop by teachers and other experts that it represents a serious threat to the planet’s future.

And given how the world’s big media organisations so love to ramp up scare stories about this non-existent problem is it any wonder?

On BBC Radio 4’s Today programme this week we heard from Cambridge professor Peter Wadhams that the Arctic is more doomed than ever before.

But apart from being something of a conspiracy theorist – he once claimed that secret agents, possibly in the pay of Big Oil, have been bumping off climate scientists, presumably because they know too much [not, it must be said, a major handicap of any alarmist climate scientist I’ve ever encountered] – he has an embarrassingly dismal track record on forecasting Arctic ice melt. Indeed, as I reported at Breitbart, even within the climate alarmist community he is now considered such a liability that even hardcore enviro loons prefer not to be associated with him.

Yet the BBC goes on featuring him as if he were an expert whose predictions should be taken seriously.

For the record, here – courtesy of Paul Homewood – is what Arctic Sea Ice coverage currently looks like: 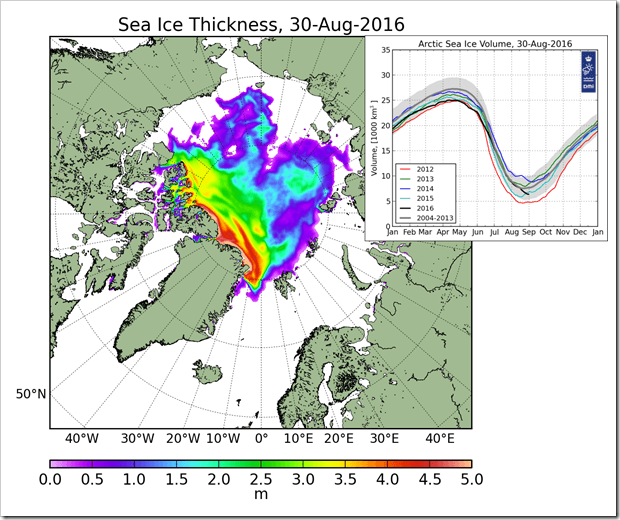 Note that the coverage is already pretty extensive – raising understandable questions about whether Polar Ocean Challenge is going to be able to complete its mission before the winter freeze sets in. Tony Heller, who has been following the expedition closely at Real Climate Science, says “they are taking a big risk heading into the Northwest Passage now with winter setting in. Even if they don’t encounter ice, it will be cold and the weather rough.”

Note too that summer sea ice coverage has increased and thickened quite a bit since Wadhams first started peddling his “ice free North Pole” predictions in 2007. 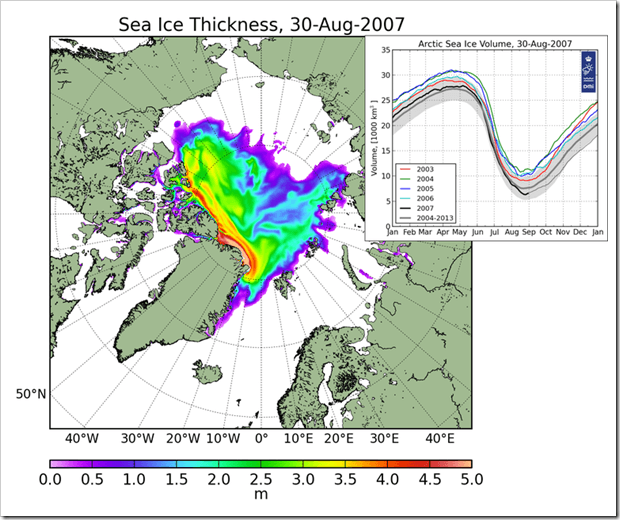 But the really sad thing – sad, at least in a “Death of Little Nell” way – is this: all these expeditions, like this David Hempleman-Adams one, and the doomed one a few years ago by explorer Pen Hadow  is that the point they are trying to make is an utterly meaningless one.

All this nonsense you regularly hear from alarmists about the polar regions being navigable by ship for the first time because of global warming is historically and scientifically illiterate. Here, for example, is a history by the Ecotretas blog going back to the 1490s of all the various ships and explorers which have previously negotiated the North East Passage (as recently but-barely navigated by the Polar Ocean Challenge). It also looks like it was pretty toasty up there during the “Arctic Heat Wave” of 1923.

One of these days, someone’s going to get themselves hurt on one of these polar Ship of Fools expeditions. But until that day, I say: “Bring them on!” If idiots want to freeze their balls off, take City investment firms and insurance brokers for a ride, and make utter dicks of themselves for our delectation and amusement while making a mockery of current climate ‘science’, then I’d say they are performing a truly valuable public service.