Ten Muslim men have been cleared of violent disorder after rioting following a ‘Muslim Lives Matter’ march, arguing they were provoked by walking past a ‘far right’ pub.

Two of the original ‘Rotherham twelve’ had already pleaded guilty to the crimes, acknowledging the weight of evidence against them. They will now appeal following the jury’s surprise ruling.

In a jubilant statement, the ‘Rotherham 12’ said the jury had “understood the need for communities under siege to defend themselves when facing intolerable levels of racist threats and violence”.

The Orgreave and Hillsborough Truth and Justice campaigns backed the rioters, and activists staged frequent rallies outside the court during the six-week trial using the slogan “self-defence is no offence”.

The riot occurred on the 5th of September 2015, when two demonstrations were held in Rotherham: one peaceful but provocative rally against Muslim rape gangs in the town, organised by Britain First, and a “Rotherham Unites Muslim Lives Matter” march to mark the murder of a local Muslim man, organised by an ‘anti-fascist’ group.

The court heard that, after the demonstrations, police channelled a large crowd of Asian men down Rotherham’s Wellgate Road, past the William Fry pub. They began to riot and attack the pub, later claiming it was a well-known haunt for the ‘far right’ and they had been provoked by men inside.

Michael Mansfield QC, defending Asif Zaman and Arshad Khan, told the court that “there comes a point when people have to say to themselves, are we going to be humiliated to the extent that we won’t leave our homes? And is it time to show our respect and solidarity…”, The Guardian reports.

Paul O’Shea, prosecuting, said men outside the pub had shouted “vile racist abuse” at the Asian men as they marched past. “Not exactly original but certainly offensive,” he said.

The jury was played CCTV footage showing a clash between the two groups in the street outside the pub before the police arrived. South Yorkshire police insisted they had no knowledge the pub was allegedly used by the ‘far right’.

However, reading a statement on behalf of the defendants outside court, Suresh Grover, director of the Monitoring Group, an anti-racism charity, blamed the police and the Crown Prosecution Service for even bringing charges and demanded an inquiry.

“The prosecution evidence clearly acknowledged that far-right groups were intent on sowing community divisions… It beggars belief knowing what the police knew that the defendants were ever arrested, let alone charged and put on trial,” he said.

“Instead of protecting the real victims in this case, the police and the CPS turned against them. On that day they led them towards danger and left them unprotected,” he added.

A 2014 report by Professor Alexis Jay found that 1,400 non-Muslim girls had been drugged, abused, raped, and trafficked by Muslim men in the town over a period of 16 years. The scandal had been allowed to go on for so long because of a “culture of fear” and accusations of “racism”, the official report found.

Speaking to The Guardian after the trial, one of the defendants, Mr. Javid, a 38-year-old NHS project manager, said the police were to blame for tensions in the town.

He said: “I believe that because the police had failed in terms of child sexual exploitation they were trying to make examples of a community – in whatever shape or form – and say: ‘Look we’re doing our job now. We’re actually putting a few Asians away’.”

His fellow defendant, Mr. Saleem, a 44-year-old gas engineer, suggested it was a police conspiracy to send the angry mob past the ‘far right’ pub.

“I have my own theories,” he said. “I don’t know if I’m right or not. I don’t think it was just a cock-up. There are similarities with what the police did to the Orgreave miners, and how they herded them to a particular spot.” 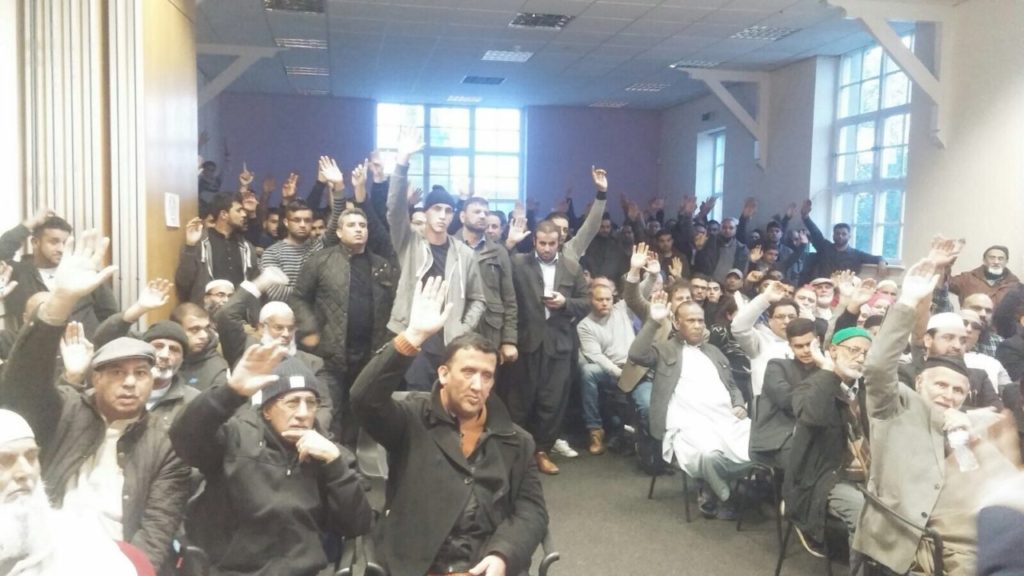 After the riots, in October 2015, an all-male group (see above) called ‘British Muslim Youth’ called for a boycott of South Yorkshire Police, threatening to extend the boycott to any Muslim business that continued to communicate with the force.

In response to the boycott threats, in April 2016, Rotherham Council announced a new “diverse” panel to “advise” police on how to deal with “extremist” marches in South Yorkshire.

Members were drawn from the Minority Communities Panel, an almost exclusively Muslim group, who have now been given the near-unprecedented power to effectively influence how the local population is policed.

In February this year the first convictions for the grooming in the town were brought against three Muslim men. The police watchdog is now examining almost 200 Rotherham policemen and women after corrupt officers, one related to the convicted groomers, allegedly conspired to protect the Muslim child sex gang.

Another officer is accused of having sex with an underage girl, allegedly passing drugs to the grooming gang and tipping them off when colleagues were searching for missing children, a court was told.

Following the convictions, the police promised to increase patrols in Muslim areas as they were concerned about potential “Islamophobic attacks”, whilst also acknowledging that so-called ‘hate crimes’ fell in the town last year.