A Salafist group banned in Germany and under legal pressure in Switzerland that inspired more than 140 Islamic State jihadists is actively recruiting in Britain’s largest cities.

Die Wahre Religion (DWR), or The True Religion, was banned for inciting hate in Germany by Interior Minister Thomas de Maizière following raids across 200 locations in 10 states on Tuesday.

“After taking part in DWR activities, more than 140 young individuals so far have travelled to Syria or Iraq to join in the fighting by terrorist groups,” de Maizière said.

The group, which radicalises under the cover of Koran distribution, has been seen sending its members to set up branded stalls and hand out strict, traditionalist translations of the Koran on Britain’s busy high streets, reports The Independent. 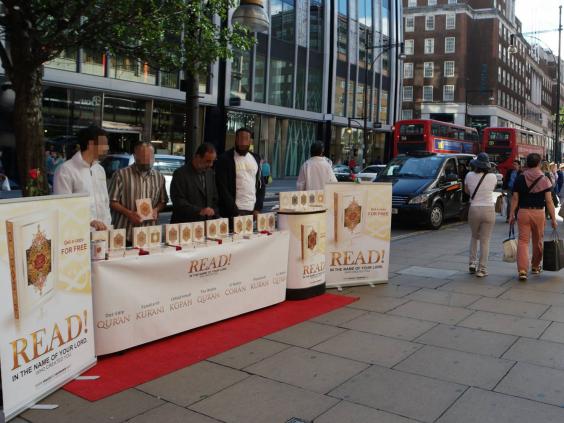 On Sunday, members of The True Religion were seen distributing the fundamentalist Korans under its “Lies!” campaign (or “Read!”, in English) on London’s Oxford Street, as well as holding stalls in Blackburn, Leicester, and Nottingham.

Founder of The True Religion and Cologne-based cleric Ibrahim Abou-Nagie has been seen several times in the UK – notably to attend the Read! campaign’s launch in Manchester in September 2014.

The Salafist cleric has been designated a hate preacher in Germany and was previously investigated by German police on allegations of encouraging criminal acts, disturbing the peace, and incitement to murder.

Abou-Nagie has also called for homosexuals to be executed in order to “protect Muslims” and said that unbelievers will burn in hell. 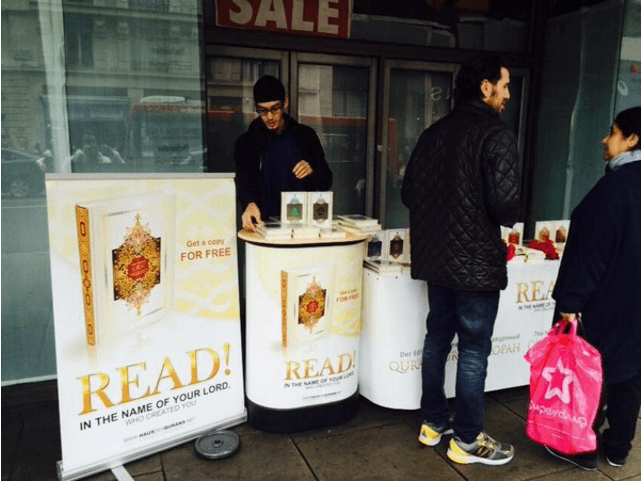 British Muslim convert John Fontain, who appeared alongside Abou-Nagie at the Manchester launch, said in 2014:

“We plan to take this to different cities in the UK…

“All the main [British] cities and inshallah [Allah willing], we want to go to Canada, America and Australia as well. Please make dua [pray] for us.”

When contacted by The Independent, Mr. Fontain denied knowledge of Germany’s prescription of the organisation.

A spokesman for the Metropolitan Police told The Independent that unless legal steps are taken, police are unable to arrest The True Religion supporters or stop their nation-wide Read! campaign.

“It’s not an offence to be a member of the group at the moment in this country.”

The website reports that the Home Office declined to comment on whether it was considering proscribing the group under the Terrorism Act 2000 (section 3) which is used to ban organisations that promote, encourage, or glorify acts of terrorism.

The group has also spread to France, Spain, and Brazil. Founder Abou-Nagie is believed to be in Malaysia to launch the Read! campaign’s latest chapter.

Germany is so far the only country to ban the Salafist organisation. Switzerland has no legal basis on which to ban groups, so cities in the nation are considering banning the distribution of Korans in order to crack down on the radical Salafists proselytising on the streets.