The visit by Le Pen marks the latest in her global tour which began last year and saw her meet with the highest profile world leader so far. Russian President Putin invited the Front National politician to the Kremlin where they are said to have discussed a range of issues including lifting the sanctions on Russia that were put in place after the start of the Ukrainian conflict L’Express reports. 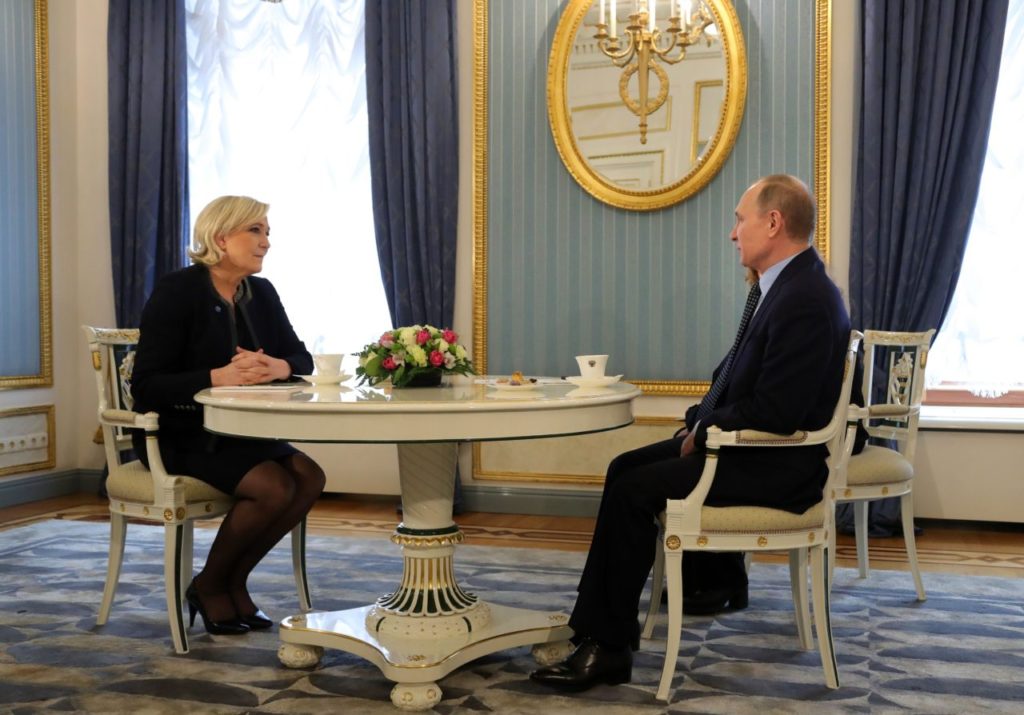 “We attach great importance to our relations with France, but at the same time we try to maintain equal relations both with the current authorities and with representatives of the opposition,” Putin said at the meeting and added: “We do not want to influence events in any way, but we reserve the right to talk to representatives of all the country’s political forces, just as our partners in Europe and the United States do.”

“It is interesting to talk with you about how to develop our bilateral relations and the situation in Europe. I know that you represent a European political spectrum that is developing fairly quickly,” Putin told Le Pen.

Le Pen added that the pair talked about radical Islamic terrorism and said that both France and Russia shared a common interest in combatting it.

Earlier this week Le Pen visited the African country of Chad where she met with members of the French military who are currently conducting anti-terrorism operations in N’Djamena.

The Front National leader had also visited Lebanon last month where she made global headlines after she refused to wear an Islamic headscarf when meeting with the Grand Mufti of Lebanon saying, “You can pass on my respects to the grand mufti, but I will not cover myself up.”

Other overseas destinations for Le Pen have included a trip to Canada, where she visited the French-speaking province of Quebec last year and slammed the immigration policies of Canadian Prime Minister Justin Trudeau.

Latest polls still show a lead for Le Pen in the first round of the presidential elections and her likely opponent to be Emmanuele Macron, a centrist running as an independent.

Second round polls between the two show a Macron lead that has been slowly losing ground to Le Pen.