UKIP have struck a deal with a Tory MP, agreeing not to stand against him in the election after he promised to back their policies of a “clean Brexit” and the burqa ban.

Conservative Philip Hollobone played a prominent role in the cross-party, anti-establishment Grassroots Out movement, signing the Kettering agreement at the group’s launch and agreeing to work with Eurosceptics from different parties.

UKIP leader Paul Nuttall revealed they would not stand against “good Brexiteers” in an interview last month. Mr. Hollobone has now signed an election pact with the party, saying he agrees with the party on Brexit, HS2, axing foreign aid targets, and the burka ban.

He has also promised to meet UKIP members “every three months or when mutually agreed to discuss the progress of Brexit and provide a forum for questions, answers and feedback relating to Brexit”, The Telegraph reports.

The Conservative MP for Kettering won a 12,590 majority at the last general election, with UKIP coming third behind Labour with 7,600 votes – 16.1 per cent.

Mr. Hollobone was educated at Dulwich College, London, where he was a contemporary of Nigel Farage and shared a platform with the former UKIP leader during the referendum campaign.

UKIP did not field a candidate against him in the 2010 general election and subsequently campaigned for his re-election as a result of his Eurosceptic views. 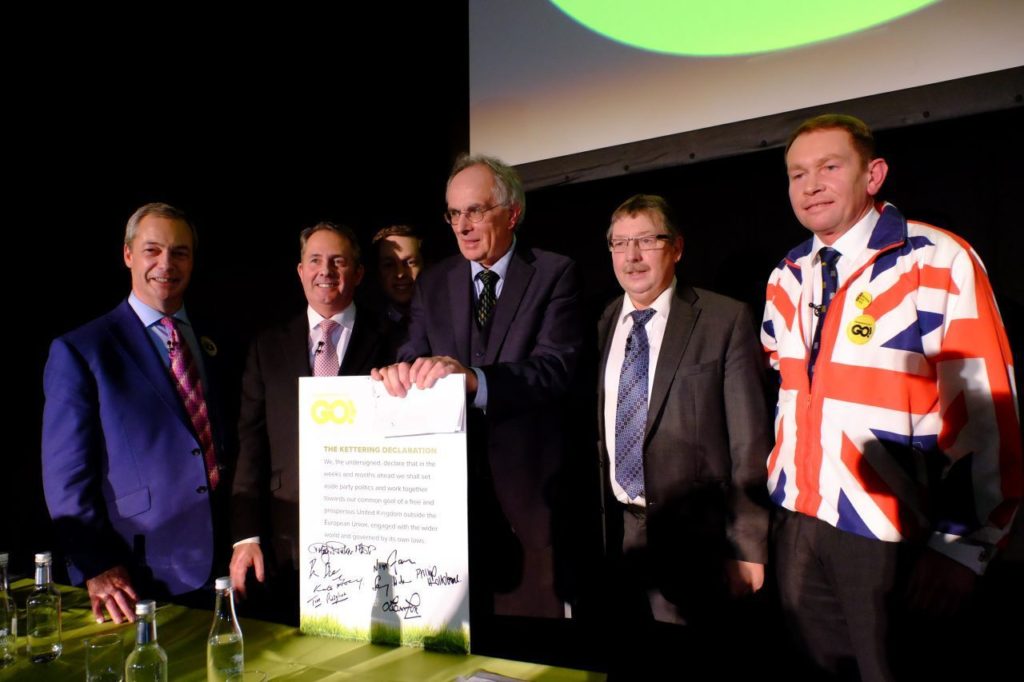 Former UKIP leader Nigel Farage (far-left) with Liam Fox (near left), the Conservative Secretary of State for International, and Philip Hollobone MP at the launch of launch Grassroots Out, in the Kettering Conference Centre in Kettering, north of London, on January 23, 2016. (Breitbart London / Rachel Megawhat.)

Now, after the Brexit vote, he has signed up to six Eurosceptic policies, including restoring the supremacy of Parliament over law making and controlling the UK’s borders, according to a memorandum of understanding seen by The Telegraph.

In return, UKIP “will advise its members, activists and supporters to vote for Philip Hollobone”.

Jonathan Bullock, who was the UKIP candidate at the last election, said: “I am delighted that we have reached an understanding with Philip Hollobone which confirms Philip’s support for a clean Brexit and his previous support for other issues which are also shared with UKIP.”

Mr. Bullock said he hoped other Tory MPs would follow suit: “This could be a template for other MPs to do the same. Some are already calling it the Kettering Agreement.

“We came to the conclusion that if Philip is prepared to sign up to our policies he is our candidate in all but name.

“Philip’s belief is that Brexiteers should stick together. From our perspective, we’re absolutely delighted that he has signed up to our six Brexit points, but also several of our other policies, including the burka ban.”

Mr. Hollobone said in a statement: “I share Kettering UKIP’s desire for a clean Brexit and am delighted that they will not be running a candidate against me.

“We all worked hard together for Brexit, being jointly committed to this as being in the best long-term interests of the country.

“As this has become a Brexit election, I pay tribute to Jonathan Bullock and Kettering UKIP’s integrity in making this decision.”