The Crown Prosecution Service (CPS) has confirmed it will not mount prosecutions against Tory MPs for breaching electoral spending rules during the 2015 General Election.

Prosecutors made the decision after considering evidence submitted by 12 separate police forces, investigating 29 constituencies where it was alleged the Tories did not properly declare hundreds of thousands of pounds in spending.

The service decided that, whilst there is “evidence to suggest the [spending] returns may have been inaccurate, there is insufficient evidence to prove to the criminal standard that any candidate or agent was dishonest”.

In one fell swoop the @cpsuk has revealed it is politically influenced and not fit for purpose.

The case against the governing party hinged largely on claims the activities of its scandal-wracked campaign “battle bus” in local constituencies, amongst other activities, were wrongly declared as national expenses rather than local expenses, allowing them to break strict electoral spending limits.

Mackinlay failed in an extraordinary bid to block the police from investigating electoral fraud in the constituency, with a judge later suggesting the “unprecedented scale” of the claims against Mackinlay’s party could result in his election “being declared void”.

Continuing investigation into the constituency may cause consternation for Prime Minister Theresa May, whose chief of staff, Nick Timothy, was at the centre of controversy in South Thanet. 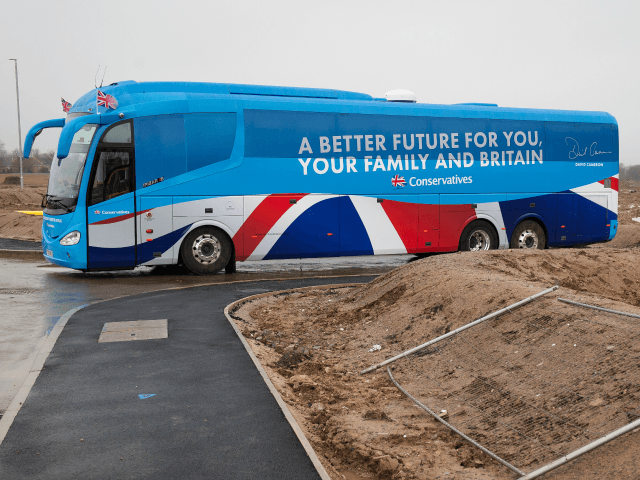 The Conservative Party election battle bus is seen between muddy fields during a general election campaign visit to a housing development in Chorley, northwest England, on April 3, 2015.

Legally, the Tories should not have spent more than a little over £15,000 in the constituency, but the party spent a further £14,000 bringing Timothy to the area and housing him in the Royal Harbour Hotel in Ramsgate, along with several others.

The party claimed they were working in aid of the wider national campaign, but a cache of secret emails seen by Channel 4 News appeared to suggest otherwise.

Prior to CPS announcement, the Electoral Commission had already fined the Conservative Party a record £70,000 for its misdeeds on the campaign trail.

The Electoral Commission explains how its #electionexpenses investigation began after reports on #c4news about South Thanet in January 2016 pic.twitter.com/fHu6zagUuw

Other allegations included claims the Tories illegally recruited unemployed people from job centres to pose as party activists, with one unnamed woman telling the Kent and Essex Serious Economic Crime Unit that she was bussed into South Thanet from London to bolster the campaign’s numbers.