Hundreds of African migrants have stormed the Spanish-Moroccan border, injuring guards and pouring into the streets of Melilla.

The city, which has belonged to Spain since 1497, is one of two centuries-old settlements on the North African coast which belong to the European country. Their frontiers with Morocco represent the European Union’s only land borders with an African nation. 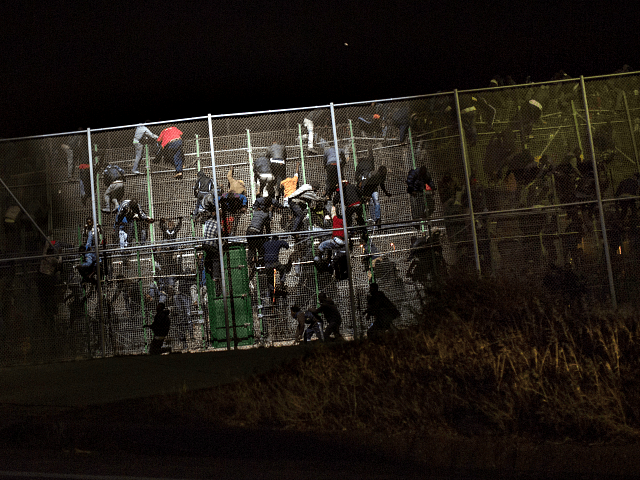 Migrants have attempted to storm the Spanish border at Ceuta on a number of occasions, as this photograph from Februrary attests / AP Photo/Santi Palacios

In the early hours of 9 May an estimated 300 illegal migrants, who travelled to Morocco with Europe as their ultimate objective, launched a sustained assault on Melilla’s boundary fences. The Spanish interior ministry reports that three guards were hospitalised after the intruders bombarded them with missiles.

Around a hundred migrants broke through the city’s defences successfully, rampaging through the streets and turning cartwheels in celebration. They could not be immediately ejected due to EU rules which require the authorities to let them lodge asylum applications on reaching Spanish soil.

Melilla’s sister city, Ceuta, has also suffered from large-scale assaults in recent months. Five hundred migrants broke through its fences on 18 February, followed swiftly by another 300 on the 20th.

These incidents were preceded by an even larger incursion in January which saw over a thousand migrants launch an “extremely violent and organised” attack which injured 55 border guards. One is reported to have lost an eye.

Border violations at the two exclaves had already tripled on 2016 by February, with Moroccan agriculture minister and billionaire oil and gas tycoon Aziz Akhannouch indicating that the North African dictatorship would relax its efforts to stem the flow of migrants if the EU refused to give way to on issues related to farming, fishing, and the long-standing illegal occupation of Western Sahara.

“How do you expect us to do the work of blocking African and even Moroccan emigration if Europe doesn’t want to work with us?” he asked. “Why should we continue acting as police and giving [migrants] work?”

In fact, the EU does pay Morocco an unspecified sum, reported to be in the tens of millions of euros, to police its borders. Charities have accused the Moroccan authorities of using “abuse, degrading treatment and violence” – including sexual violence – to do so.