UK authorities adopted an “open door” policy for Libyan heritage British passport holders, including associates of the Manchester bomber, returning to the war-torn nation to fight alongside jihadist and al-Qaeda-linked groups.

Manchester has one of Europe’s largest Libyan communities and many left to fight in the 2011 revolution, with some joining extremist groups and others returning to the UK.

Some of the men were allowed to travel, with “no questions asked”, shortly after having anti-terror control orders lifted.

Bomber Salman Abedi was friends with at least two members of a group of youths who left the UK with their fathers to fight Colonel Gaddafi with the ‘Manchester Fighters’, but later switched allegiances to Islamic State.

The fathers, including Mr Abedi, were members of the militant Libyan Islamic Fighting Group [LIFG], which was allegedly once allied to al-Qaeda and is a banned organisation in the UK.

It is thought that one of the counterterrorism raids on Wednesday was connected to the group who switched to Islamic State after police received a tip-off, The Times reports.

A counterterrorism source told the paper: “People once regarded as threats to national security were permitted to go and fight against Gaddafi. We have to examine the consequences of those decisions.” 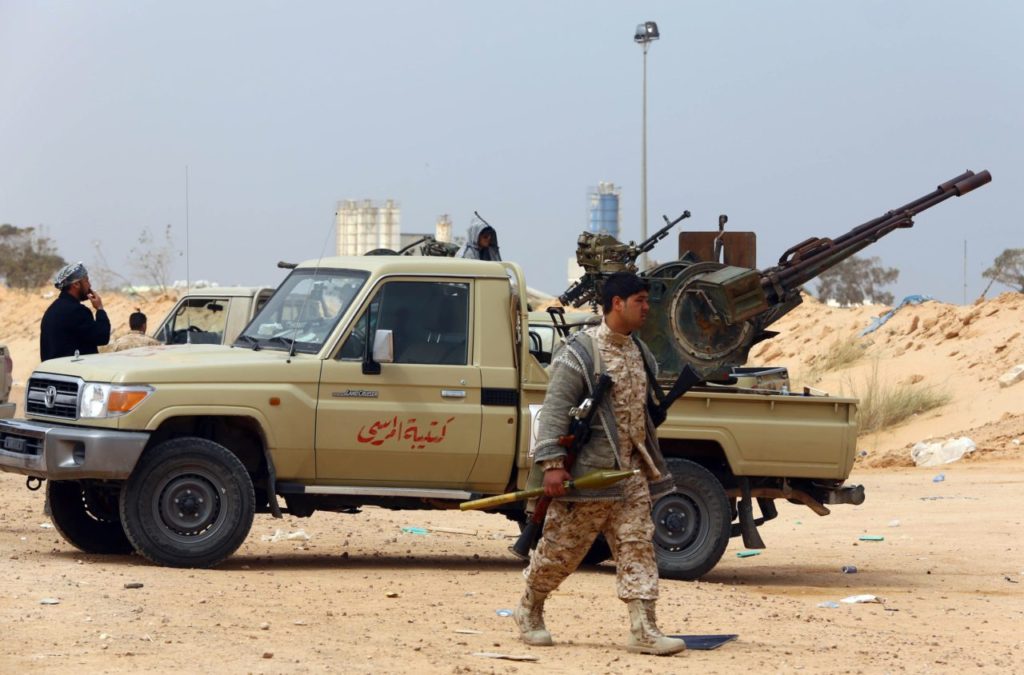 Members of forces loyal to Libya’s Islamist-backed parliament General National Congress (GNC) prepare to launch attacks as they continue to fight Islamic State (IS) group jihadists on the outskirts of Libya’s western city of Sirte on March 16, 2015. (MAHMUD TURKIA/AFP/Getty)

Several former rebel fighters, who insist they are not extremists, are now back in the UK.

One, who was effectively put under house arrest for fear he would join militant groups in Iraq, told the Middle East Eye he was “shocked” that he was able to travel to Libya in 2011, shortly after his control order was lifted.

“I was allowed to go, no questions asked,” said the source, who wished to remain anonymous.

He claimed to have met several other British-Libyans in London who also had control orders lifted in 2011. “They didn’t have passports, they were looking for fakes or a way to smuggle themselves across,” he said.

Belal Younis, another British citizen who went to Libya, said an MI5 officer stopped him as he returned to the UK. He said they “told me the British government have no problem with people fighting against Gaddafi”.

He said he was stopped again as he returned to Libya and told he could be committing a crime if he fought, but the same MI5 officer called him to tell him that he had “sorted it out”.

“The government didn’t put any obstacles in the way of people going to Libya,” he added. “The vast majority of UK guys were in their late twenties. There were some 18 and 19. The majority who went from here were from Manchester.”

According to The Times, one of the Manchester youths, who turned to Islamic State, was convicted three years ago of helping jihadist recruits to travel to Syria and Iraq to fight for the terrorists.

Another was charged with terrorism offences and spent time in prison on remand before the prosecution offered no evidence. His father was sanctioned by the U.S. more than a decade ago for financing the LIFG.

Members of the younger Libyan group are linked to Raphael Hostey, another Manchester youth who was one of the biggest British recruiters for Islamic State until he was killed in a drone strike in Syria last year.

The security services are also understood to be examining links between Mr Abedi and Mr Hostey.