The number of terror-related arrests has hit a record high of 304 in the year to March 2017, up 18 per cent on the previous year’s figure, the Home Office has revealed.

The arrests include the 12 people detained following the London Westminster terror attack in March, but not those made following the Manchester and London Bridge attacks.

Of the total arrests, 100 people were released without charge – including all 12 detained in connection with the Westminster attack. 108 were charged under the Terrorism Act 2000, including 91 charged with terror-related offences. Of the remainder, 88 were bailed pending further action, while eight faced “alternative action”. 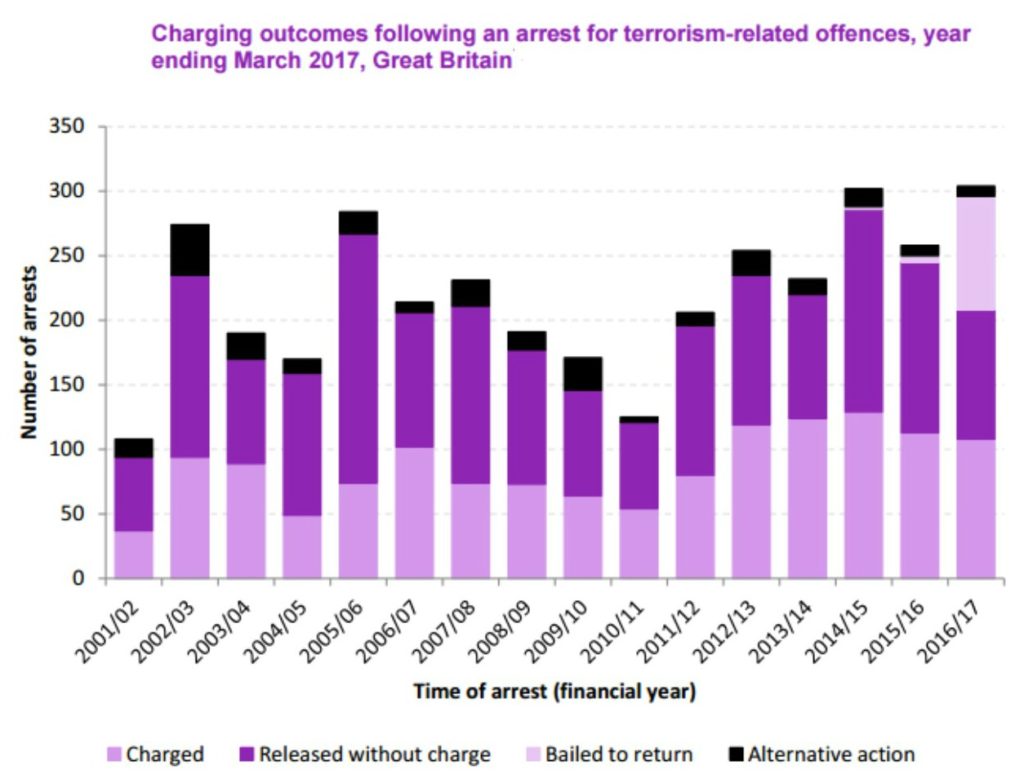 Marked in the figures was a substantial increase in the number of white people arrested in connection with terrorism, which jumped from 68 in the year ending March 2016 to 113 in the last year, an increase of 66 per cent. White people accounted for 37 per cent of the total arrests this year, up from 26 per cent last year.

Meanwhile, those described as of “Asian” ethnicity, although still the largest group, accounted for 44 per cent of total arrests – 133 people.

The Home Office report also revealed that 79 trials took place during the year to March 2017 for terrorism-related offences, representing a 55 per cent increase on the previous year. Of the 79 people tried, 68 were convicted – again, a record annual figure. The remaining 11 were acquitted.

Six of those convicted received life sentences, and four received sentences in excess of ten years.

British prisons held 186 prisoners for terror-related offences as of 31 March 2017, an increase of 15 per cent on the previous years’ figure of 162. Of those prisoners, 86 per cent had been convicted and 16 per cent were being held on remand.