Nearly one-tenth of people living in the United Kingdom are foreign citizens, according to new figures from the Organisation for Economic Co-operation and Development (OECD).

There were a record 5.95 million foreign citizens living in the United Kingdom in 2016, the latest year for which figures are available, according to the intergovernmental organisation.

The immigrant figures had risen significantly in recent years, according to the research. 2016’s 5.95 million was up on 2015’s 5.6 million, and was near double the 2004 figure when just five per cent of British residents were foreign citizens.

The figures may suggest the total number of foreign born residents is even higher, as many take on British citizrnship after moving to the country. According to 2015 Office of National Statistics (ONS) figures, nine per cent of British residents were foreign citizens, but this figure rose to 13 per cent for those foreign born, reports The Times. 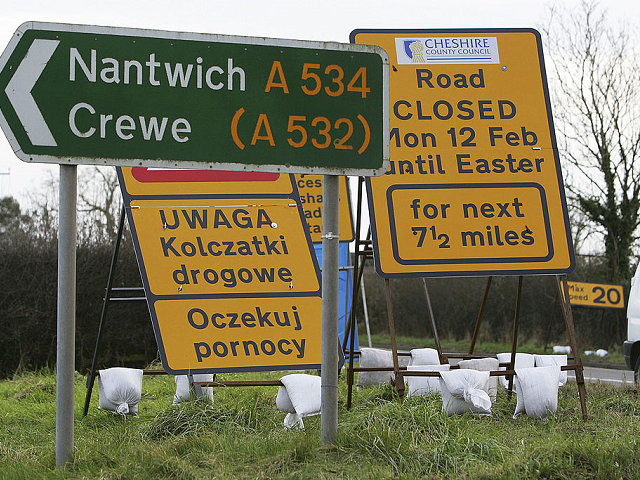 More of the new arrivals over the course of 2015 had come from non-EU nations than from within the bloc, being split 189,000 to 184,000. Despite that, the largest group of non-British citizens in the UK are from Poland.

The news of Britain’s growing immigrant population comes as separate OECD figures shows 2016 was a record year for migration, with five million people flowing into industrialised countries from the rest of the world. The organisation added they did not expect any of the new arrivals to ultimately return to their home nations, the figure representing, therefore, a permanent population increase well above natural growth.

Of those arrivals, some 1.6 million requested asylum in an industrialised nation, with Germany seeing more arrivals than any other.

There have been some significant outward signs of the changes wrought by this great migration. Breitbart London reported Thursday that Frankfurt, Germany’s fifth largest city, was now minority German, with 51 per cent of residents having an immigration background.

The city followed British capital London, which officially became minority white British with the taking of the 2011 census.