A U.S. conservative activist has called a Polish newspaper he is suing for defamation a “far-left, globalist, progressive outlet” and referred to the reporter who attacked him in an article he wrote for the paper last year as a “fantasist and fairy-tale writer.”

Matthew Tyrmand of the Project Veritas group — who brought the case against Gazeta Wyborcza’s publisher Agora and Tomasz Piatek, the newspaper’s journalist who wrote an article entitled ‘Leopold’s son, Trump’s man’ — spoke to Breitbart London about his courtroom opponents.

“They hate the right, they hate nationalist populists, even free marketers. They hate anyone who doesn’t share their globalist, leftist, progressive, radical world view,” he said of Gazeta Wyborcza, which he called “very very corruptible” due to its post-Communist era ties.

“Tomasz Piatek has had many run-ins with the courts regarding defamation in the past. He’s more of a fantasist and a fairy-tale writer than a reporter,” he said.

In an article published in May last year, Piatek made a number of remarks about Tyrmand – who has previously written for Breitbart News — which the 36-year-old believes were malicious lies published purposely to defame his character as retaliation for an article he wrote only nine days earlier, exploring potential George Soros links with KOD – the Committee for Defence of Democracy [Komitet Obrony Demokracji].

Tyrmand said: “This was very much a response to James O’Keefe [founder of Project Veritas] and my investigation into Soros and KOD. There’s no coincidence in terms of timing, and the timing was such that we did this investigation, we put it out there on Breitbart and elsewhere, I did a bunch of Polish media around it and then a Soros-backed outfit was at the same time funding Gazeta Wyborcza.

“Agora [which Soros’s Open Society Foundations recently took a large stake in] went in and bailed them out because the last government was doing so through PZU [a state owned insurance company] but with the electoral shift in power, that was no longer viable.

“So MDIF [Media Development Investment Fund] comes in as a philanthropic entity that invests where ‘free press is under assault,’ which is obviously nonsense in Poland.

“He comes in, and shortly after, Piatek writes a hit-piece filled with lies saying that I was on Trump’s payroll and by extension that I was a [Vladimir] Putin shill. All this happens at the same time. Incidentally, during that time Gazeta Wyborcza is putting in inserts to fund KOD.” 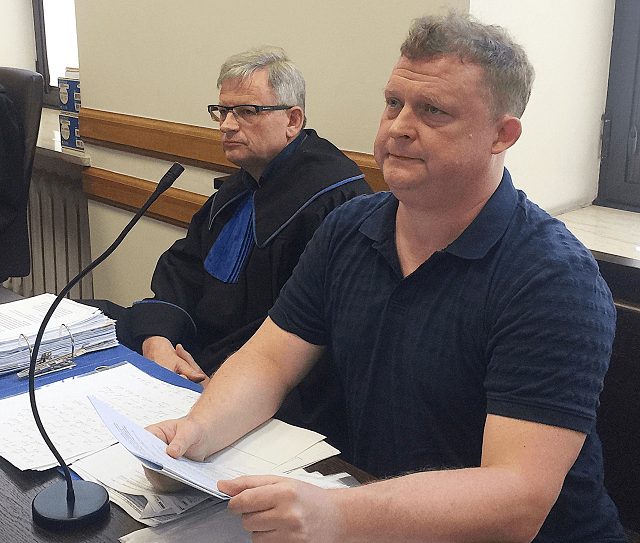 When Tyrmand saw Piatek’s article he believed he had a strong case against the newspaper.

“When the piece came out I reacted immediately on social media and thought, ‘this is unconscionable.’ I called my lawyers and said ‘how far beyond the line is this?’ I thought it was [beyond the line] because not only were these lies, but they were really easily verifiably lies,” he said.

Piatek wrote about Tyrmand again last November, this time responding to being sued by the Polish-Jewish-American writer. He suggested Tyrmand’s lack of Polish language skills meant he probably didn’t read his article and that his lawyers should have explained to him that he was wrong.

Tyrmand said: “He blamed my lawyers, which is amazing. They’re the best lawyers in Poland on IP [intellectual property].

“These lawyers play at the highest level and yet he makes that smear, saying that I didn’t understand what he was saying. Everybody understood what he was saying and that was a cop out, and it was a weak cop out, to try and remove his own culpability and shift it.”

Piatek also told Associated Press he found it suspicious Tyrmand had waited until July to start proceedings against him, after he had published another article criticising Polish Defense Minister Antoni Macierewicz, a claim Tyrmand finds laughable.

“It took me a few weeks to go through the fact patterns with my lawyers,” he explained.

The son of the popular late anti-Communist novelist, writer and editor Leopold Tyrmand, has written for Breitbart London on the health of Polish democracy after the election of the Law and Justice Party, and how Poland is one of the best places for Jews to live; neither of which are in tune with Gazeta Wyborcza’s narratives. He has also not been afraid to criticise the paper in previous articles.

Tyrmand said: “I am an existential threat to them because I have the ability to go, not just in Poland where they are pretty well-hated and understood, but all over the world to talk about what they do and what they represent.

“It wasn’t surprising that this piece especially, because it hit close to home with the investigation into Soros and KOD, who they are aligned with, meant that they pulled out all the stops in going after me.”

Tyrmand’s colleague James O’Keefe, who Piatek referred to in his piece as a ‘specialist in illegal recordings and eavesdropping,’ was the first to take the witness stand on Wednesday, June 21.

“James O’Keefe coming to testify was really great, because here’s a really high-profile crusader for journalistic truth and transparency in media,” Tyrmand said.

“Him coming to Poland really helped establish the credibility of the argument as well as give it huge visibility, given his visibility,” he added.

If he wins, Tyrmand wants an apology and 50,000 Polish zlotys which he intends to donate to five Polish charities. He also wants corrections to be made to the article.

“I’m not looking for them to strike the column. I’d like the column to remain up but with highlights on each of the ten or dozen or so lies that I pinpointed, clarifying that they were not honest and giving the truth,” he said.

The next court session takes place in November, where Tyrmand said will call more witnesses to the stand to testify on his behalf.