The United Kingdom will agree to follow all European Union rules after Brexit and keep the nation’s borders open for the duration of the transition period to 2022, with further bad news for fisheries and communities in Northern Ireland as a new agreement was reached in Brussels Monday.

The European Union’s chief Brexit negotiator Michel Barnier made the announcement in a joint press conference with Britain’s David Davis in Brussels, where the pair presented what was introduced as a “legal text which constitutes a decisive step” towards a final agreement. Revealing the enormous extent to which Theresa May’s government has sold out the Brexit-voting British public, Barnier and Davis spoke on a number of key policy areas including immigration, British control over British laws, and regaining control over British fishing waters.

Speaking first at the meeting with journalists, French politician Barnier said Britain had agreed to continue following all Brussels laws for years after the offical Brexit date of March 2019 under the guise of a transition period, but would not be able to challenge or make decisions on that law itself.

Rees-Mogg’s Ultimatum to May: If Britain Bends to EU on Trade Policy It Will Become ‘Joke Nation’ https://t.co/V1V2eakFy6

Sugar-coating the fact that Britain won’t be free from the yoke of EU legislation for years to come, Barnier said: “the United Kingdom will no longer participate in EU decision-making processes because after the 30th of March 2019 you will no longer be a member state.”

“Nonetheless, it will preserve all the benefits and advantages of the single market, the customs union, and European policies and will, therefore, be required to respect all European rules just like member states do.” 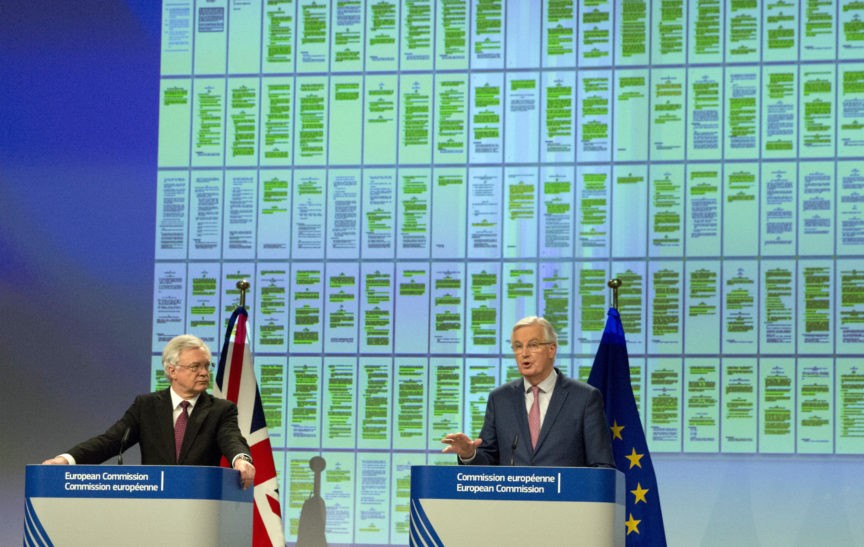 Barnier also made clear that Britain wouldn’t have any control over immigration during the transition period either, with all European Union citizens coming to the United Kingdom through the period into the 2020’s would have full rights forever, under what he called a “new resident status”, saying this would give those citizens “legal certainty.”

Yet the whole deal will stand or fall on answering the question over the European Union-British border between Republic of Ireland and Ulster, which has been inflated to a matter of utmost importance — and particularly by those who would see Britain remain locked into the European Union. Just days after British Brexit leader Jacob Rees-Mogg warned the EU was using Ulster to keep the UK in the single market, Barnier euphemistically referred to the “backstop solution” to Ireland — keeping Britain’s westernmost region in the customs union.

We sold out fisheries when we joined the EEC and we’re selling them out now as we leave. https://t.co/lc7XEztwoL

Davis — whose formerly tough pro-Brexit stance seems to have been worn down during his time negotiating in Brussels to a point where he greeted today’s news of another massive capitulation as good news — spoke next and dropped the fisheries bombshell, admitting that not only would Britain not take back control of its fisheries, but that the proportion of fish that UK fishermen are allowed to catch from their own waters under EU laws wouldn’t change through the transition.

Paradoxically, Davis praised this capitulation as “protecting the interests of the United Kingdom’s fishing community”.