A greater proportion of people in Europe believe their society is divided than people in any other world region, with immigration being the largest source of division in many countries, a study has found.

Half of the respondents in the UK said differences between immigrants and Brits was a source of social tension, followed by differences of religion (47 per cent), ethnicity (41 per cent), and political views (40 per cent).

However, in the online Ipsos Mori poll of 27 countries for the BBC, it was politics that emerged as the main cause of division globally, identified by 44 per cent of the 19,428 respondents. 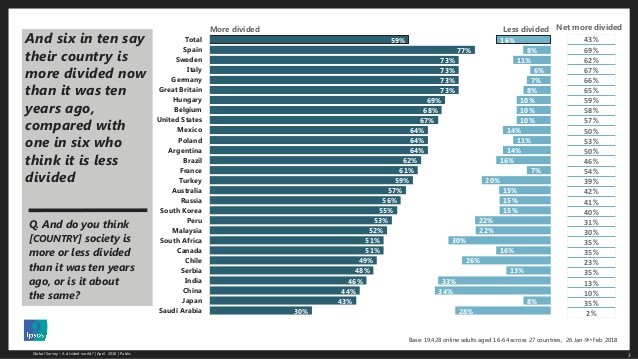 Serbia, which has a very low immigrant population, was the European nation least divided by immigration. Japan and South Korea were also extremely low.

The nations most divided by religion, meanwhile, were Belgium (50 per cent), Australia (47 per cent), and France, where 45 per cent also cited it as an area of tension.

People are least trusting of immigrants in Russia (34 per cent), Malaysia (31 per cent), and Hungary (28 per cent).

And around the world, only 14 per cent say mixing with people from other backgrounds, cultures, or points of view causes conflict – yet this proportion is higher in Hungary (34 per cent), Sweden (33 per cent), Germany (29 per cent), and Belgium (27 per cent). 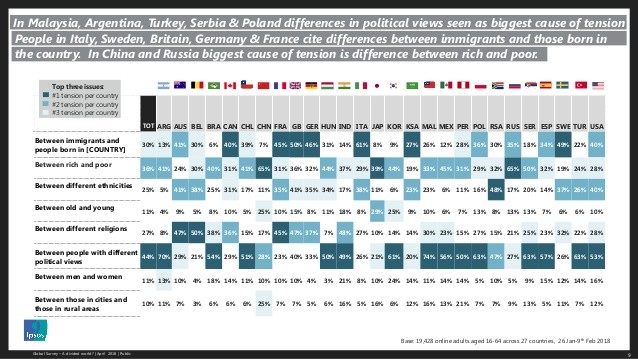 “This study shows that people across the globe think their societies have become increasingly divided compared with ten years ago and that the greatest cause of tension is between people with different political views.

“But the study shows there some very different divisions around the world.

“Differences between immigrants and people born in the country are seen as a particular cause of tension among many Western European countries whereas tension between rich and poor is the top concern in Russia, China, and Japan.”