The Lesbian, Gay, Bisexual, Transgender, Queer Plus Society at London’s Goldsmiths University suggested people who question transgenderism are sent to such camps, for up to ten years, for “re-education”.

“The ideas of [Trans exclusive radical feminists] and anti-Trans bigots literally *kill* and must be eradicated through re-education,” the student group wrote on Twitter before deleting their account.

When Claire Graham, a special education needs teacher, asked if their attempts to silence a list of academics who questioned transgenderism was “a bit fascist”, the account replied: “Na, we’ll just arrange to send you to the Gulag.”

Gulags were brutal labour camps used by Stalin’s Soviet dictatorship to lock up opponents and “enemies of the state”, resulting in the death of an estimated 1.05 million people. 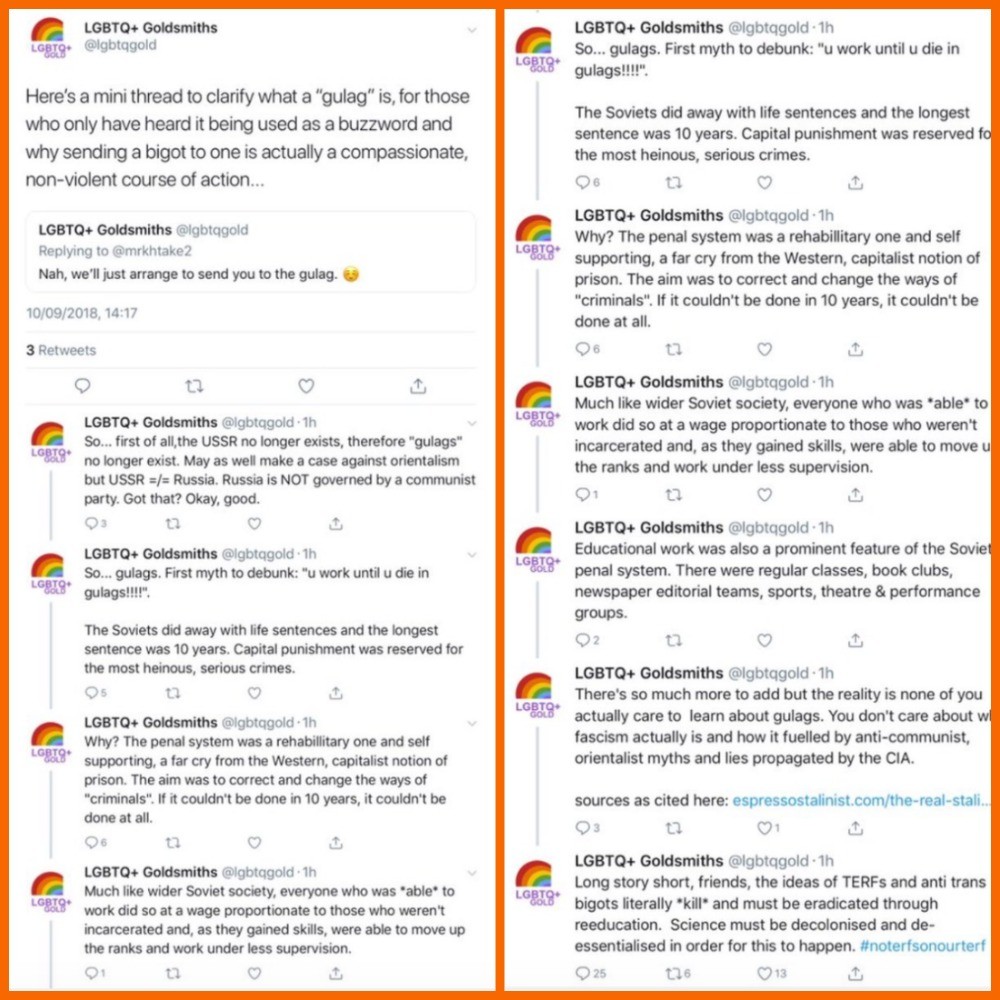 “First myth to debunk: ‘u work until u die in Gulags!’ The Soviets did away with life sentences and the longest sentence was 10 years. Capital punishment was reserved for the most heinous, serious crimes.

“The penal system was a rehabilitatory one. The aim was to correct and change the ways of criminals.”

It added: “Much like wider Soviet society, everyone who was ‘able’ to work did so at a wage proportionate to those who weren’t incapacitated and, as they gained skills, were able to move up the ranks and work under less supervision.

The Goldsmith's Uni LGBT twitter account is posting lists of women they've designated 'terfs' to be blocked & policing other people who follow them. If I hadn't seen this so many times before I'd be shocked. #thoughtpolice #ToxicTransactivism pic.twitter.com/Lwdt8QabWa

Natacha Kennedy, a transgender lecturer at Goldsmiths, created the list of academics the student group was seeking to silence. A Facebook group Kennedy ran called for fake “hate crime” claims to be used to attack those named.

Goldsmiths Students’ Union has since suspended the group and withdrawn its support. The group itself has not commented.

A statement backed by the union said: “We condemn the abhorrent content of the tweets and they are in complete opposition to the views and values of the Students’ Union.”