Nigel Farage has spoken to the Brexit Betrayal rally taking place in Parliament Square, telling the thousands marchers and campaigners that they were joined in spirit by 17.4 million voters who said that Britain should leave the European Union in 2016.

The Brexit leader spoke at the rally, which was the culmination of a two-week march on London from Sunderland, in North-East England, and told those present that they had been treated with total contempt by the British political class who were working to sign the country up to “a new European Treaty which in many ways is worse than the one we wanted to leave.”

WATCH | @Nigel_Farage: "What they want is to beat us down, for us to give up, for us to go away. Let me tell you, am I today on March 29th downcast? Am I disheartened? NO! I am more determined to fight back than I've ever been in my life!"

Mr Farage said how glad he was that Theresa May’s Withdrawal Agreement had been voted down for a third time by Parliament, but said the past two years had been “one of the saddest and worst chapters in the history of our nation.” 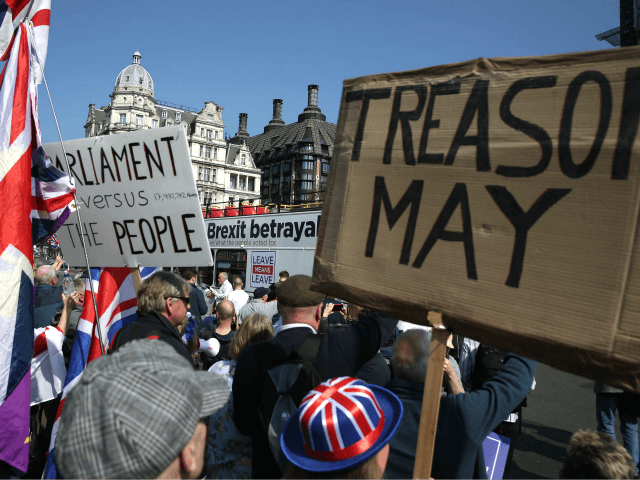 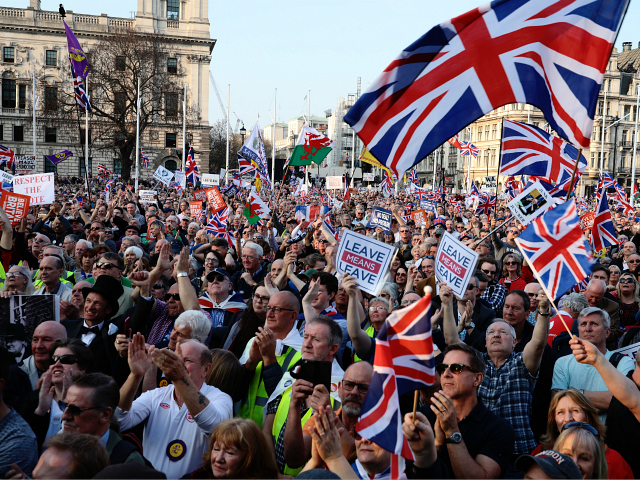 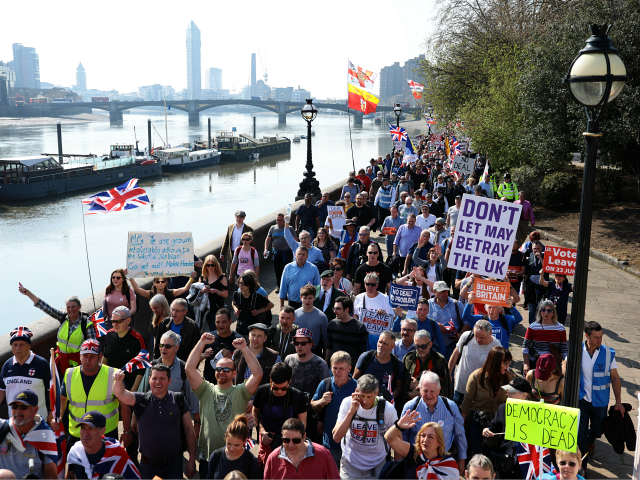 Despite the ongoing betrayal of the spirit of the Brexit vote, Mr Farage vowed to fight on and said the attempts to stop Brexit from going ahead had made him more determined than ever.

Mr Farage told the rally, which he joked was meeting in “enemy territory” in Westminster, that:

The British public is more with us now than they’ve ever been… there’s a clear lead for us to leave on the 12th of April with no deal, lets hope and pray that happens.

But, I’m sorry to say I fear that the betrayal we have seen over today’s date will probably be repeated on the 12th of April. But let us not be disheartened, I tell you what — if that means we have to fight the European elections on the 23rd of May, let me tell you I will fight them! 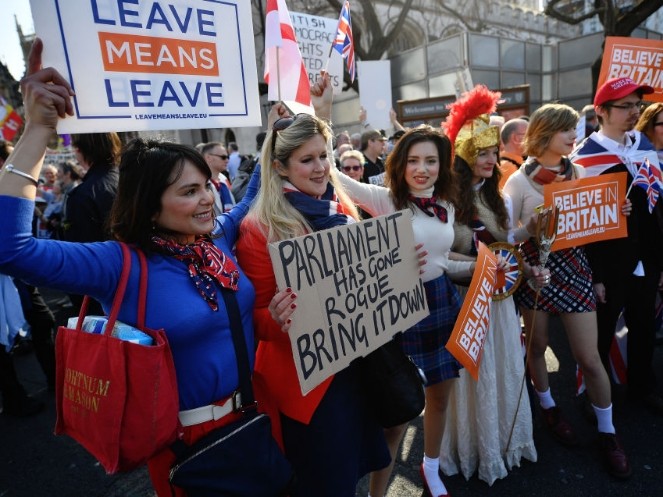 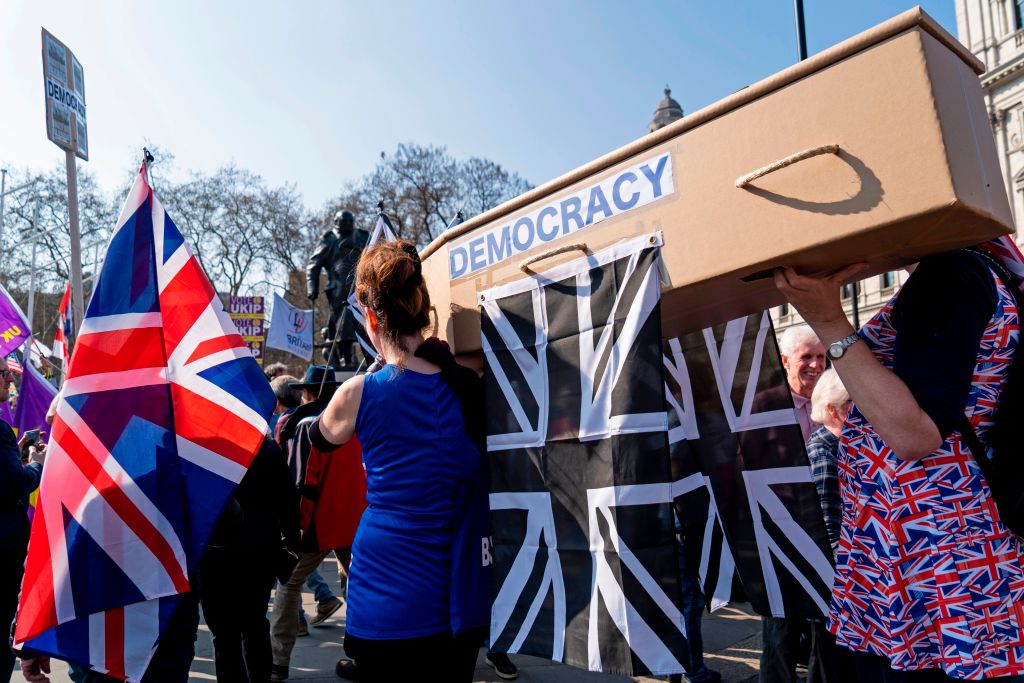 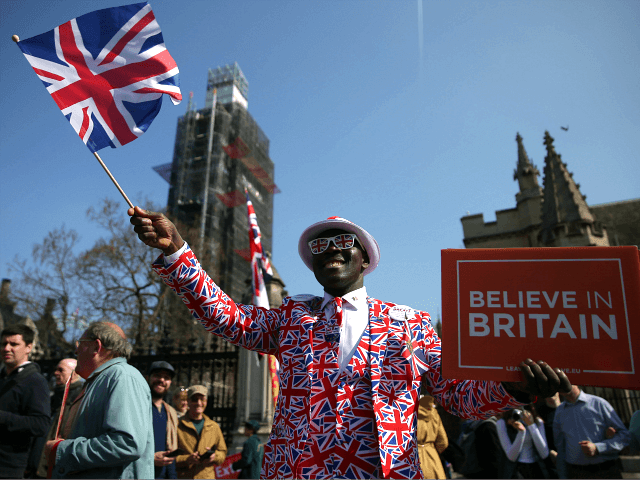 “I can’t think of any time in history, where a greater betrayal of a democratic vote has ever happened in the Western world, and they can tonight over there content themselves because they think they’re winning. But that’s because they live in the Westminster bubble,” Farage continied.

We’re the real people of this country, and we know that the referendum was the first of many great victories. 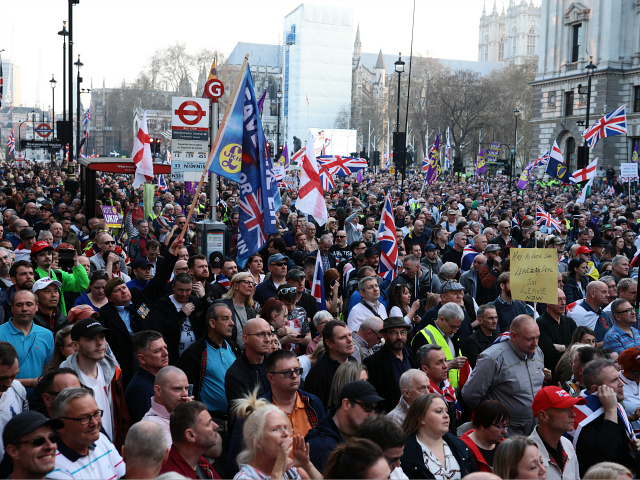 .@LeaveMnsLeave rally in Parliament Square. Total determination to see the referendum result which 17.4 million voted for delivered with a true Brexit. pic.twitter.com/ZOWHLKHRaF

While Britain’s overwhelmingly pro-Remain Houses of Parliament will continue working next week to prevent the United Kingdom leaving the European Union, Breitbart London reported today that the European Union is publicly saying that a full, no-deal Brexit is moving nearer.

The European Commission said this afternoon that in light of today’s vote, “a ‘no deal’ on 12 April is now a likely scenario.”

This will be interpreted as a threat by British politicians — but Brexiteers among the general public may feel like they are being threatened with a good time. 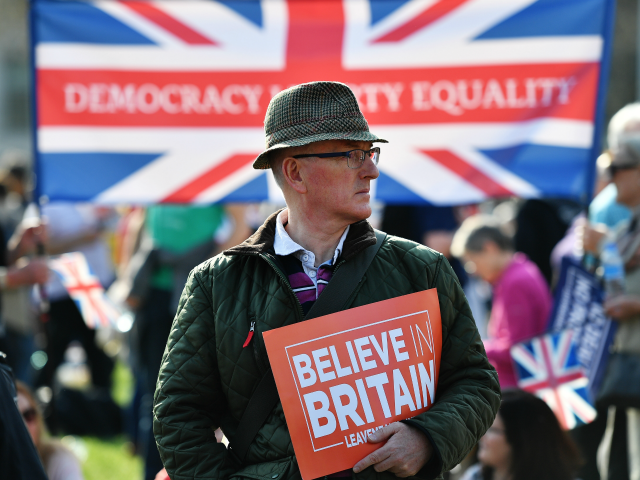 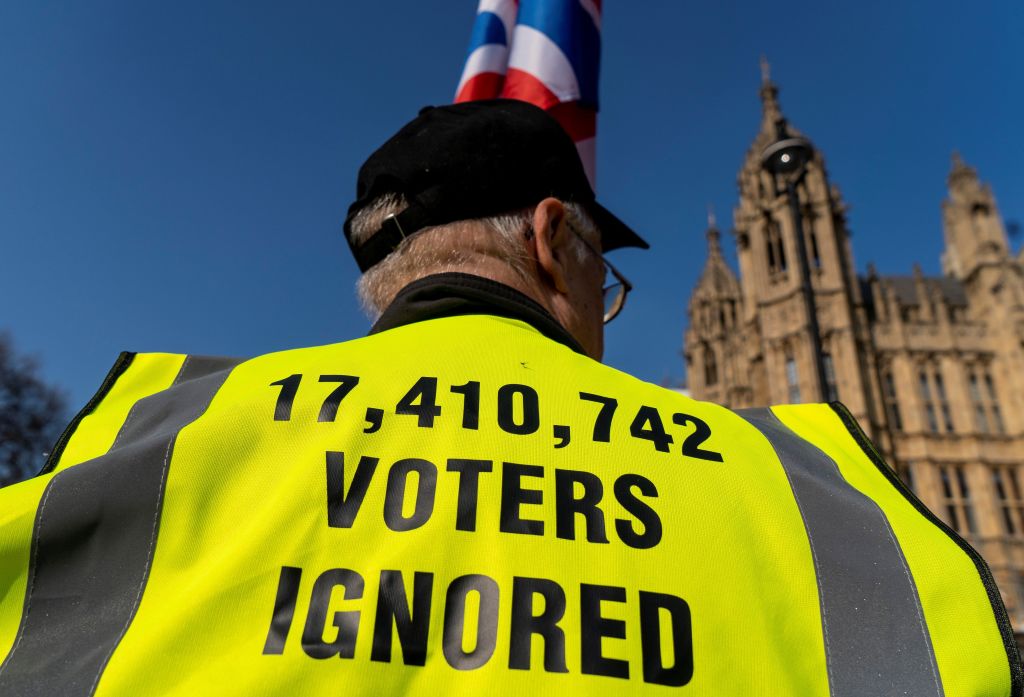 Pro-Brexit activists demonstrate near the Houses of Parliament in central London on March 29, 2019. NIKLAS HALLE’N/AFP/Getty Images 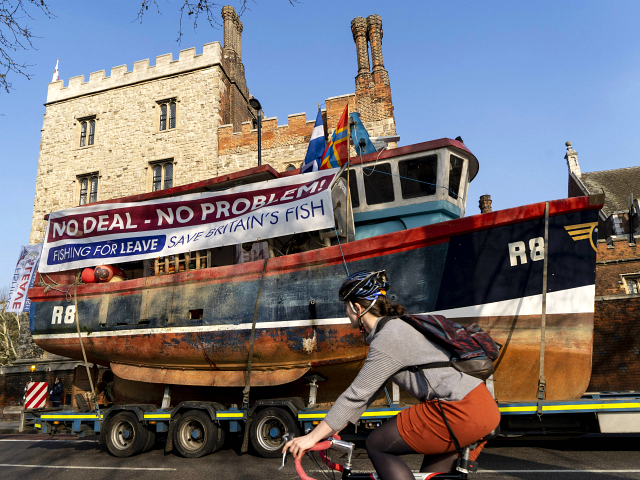 Also speaking at the rally was Labour’s Kate Hoey, a dedicated Brexiteer who has faced the scorn of her fellow party members to support Britain leaving the European Union for years. Addressing the demonstration, Hoey was absolutely scathing of her Parliamentary colleagues and the Speaker of the House, John Bercow, who she said had backed up “every devious method” to frustrate Brexit.

Hoey said: “I feel so distressed and so angry about Parliament… we all remember the wonderful feeling when we woke up and realised that 17.4 million people had voted to leave.

“My 96-year-old mother, who has since passed away, said to me: ‘you know, they will never let us leave’. And I vowed that day, that I would do my very best to make sure the democratic will of the people in this country is respected.”

Warning the attendees of the march and demo that more fights for Brexit certainly lay ahead, Hoey concluded her speech by saying: “The betrayal started the day after we voted to leave… While we are not celebrating leaving tonight, we are celebrating the fightback — and the fightback begins tonight.” 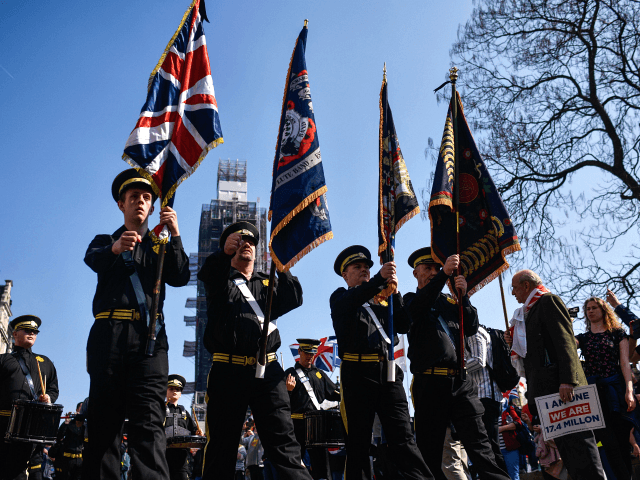 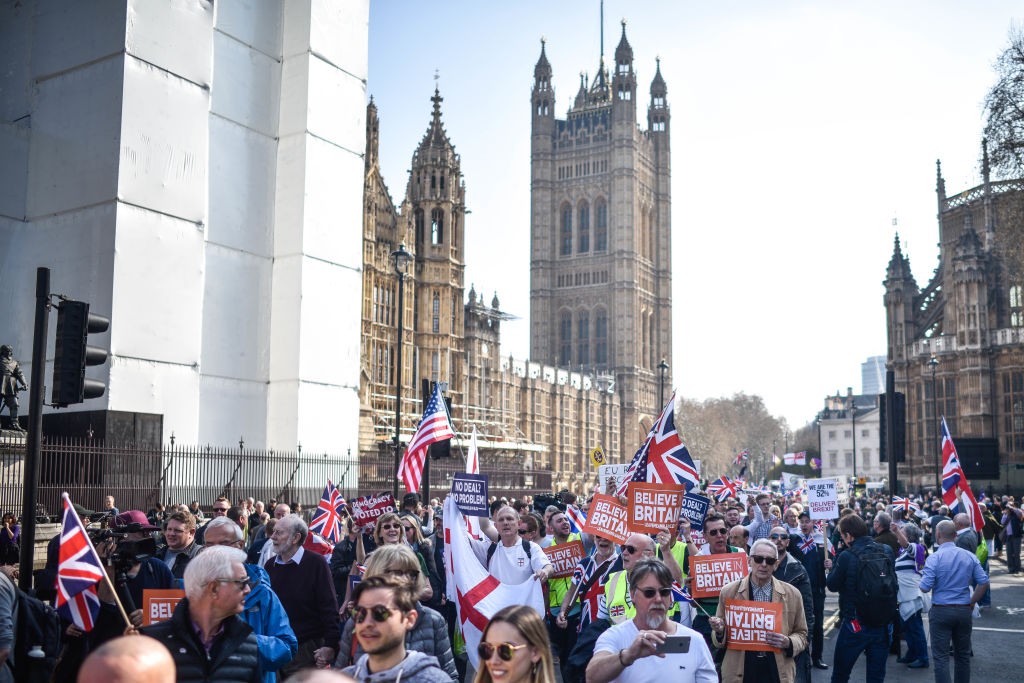 LONDON, ENGLAND – MARCH 29: Pro-Brexit supporters march past the Houses of Parliament a demo in Parliament Square on March 29, 2019 in London, England.Photo by Peter Summers/Getty Images 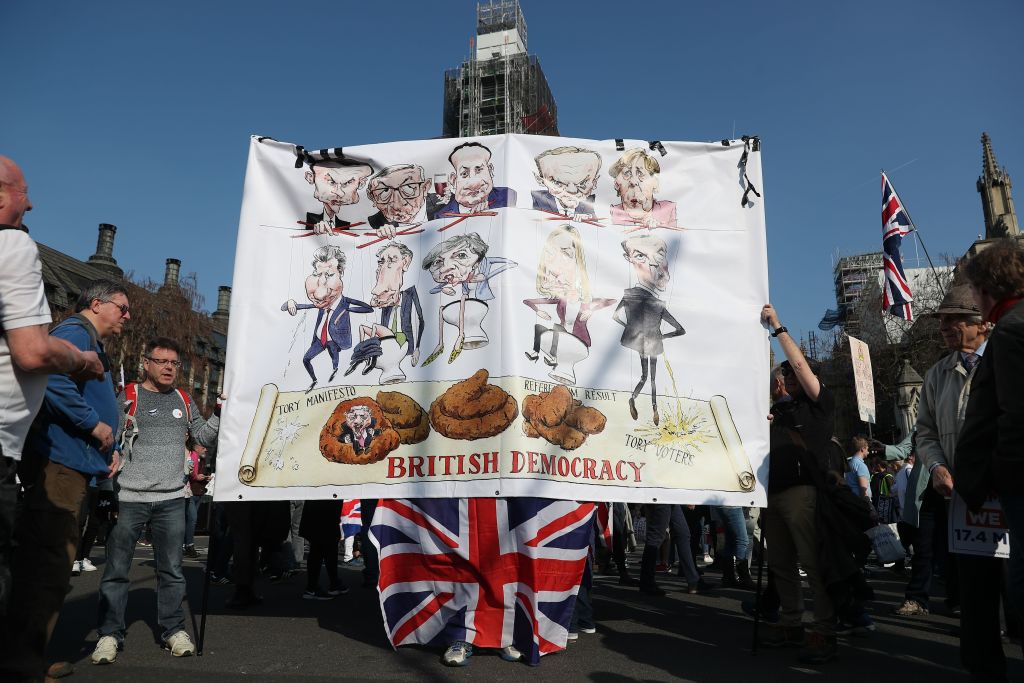 Pro-Brexit demonstrators carry a banner in Parliament Square outside the House of Commons in central London on March 29, 2019 after MPs rejected the EU Withdrawl Agreement for a third time. DANIEL LEAL-OLIVAS/AFP/Getty Images