Germans are more unwilling than willing to defend NATO ally the United States should she be attacked by Russia, according to a YouGov survey.

The poll was conducted amongst key members of the North Atlantic Treaty Organization (NATO) timed to coincide with the 70th anniversary of the defence bloc which was formed during the Cold War to protect allies from Soviet aggression.

Out of the U.S. France, the UK, and Germany, Americans showed the most willingness to “use military force if Russia attacks” NATO allies and partner countries.

Britons were almost equal in the urge to protect as Americans, but opinion was an “even split” on whether to defend Turkey, while the French were more willing to defend the U.S. and others apart from the Ukraine, Turkey, and Romania.

Germany was the only country out of these major powers to say they were more unwilling than willing to defend the U.S., 43 per cent to 32 per cent; by contrast, 54 per cent of Americans think they should defend Germany should she find herself attacked by Russia. 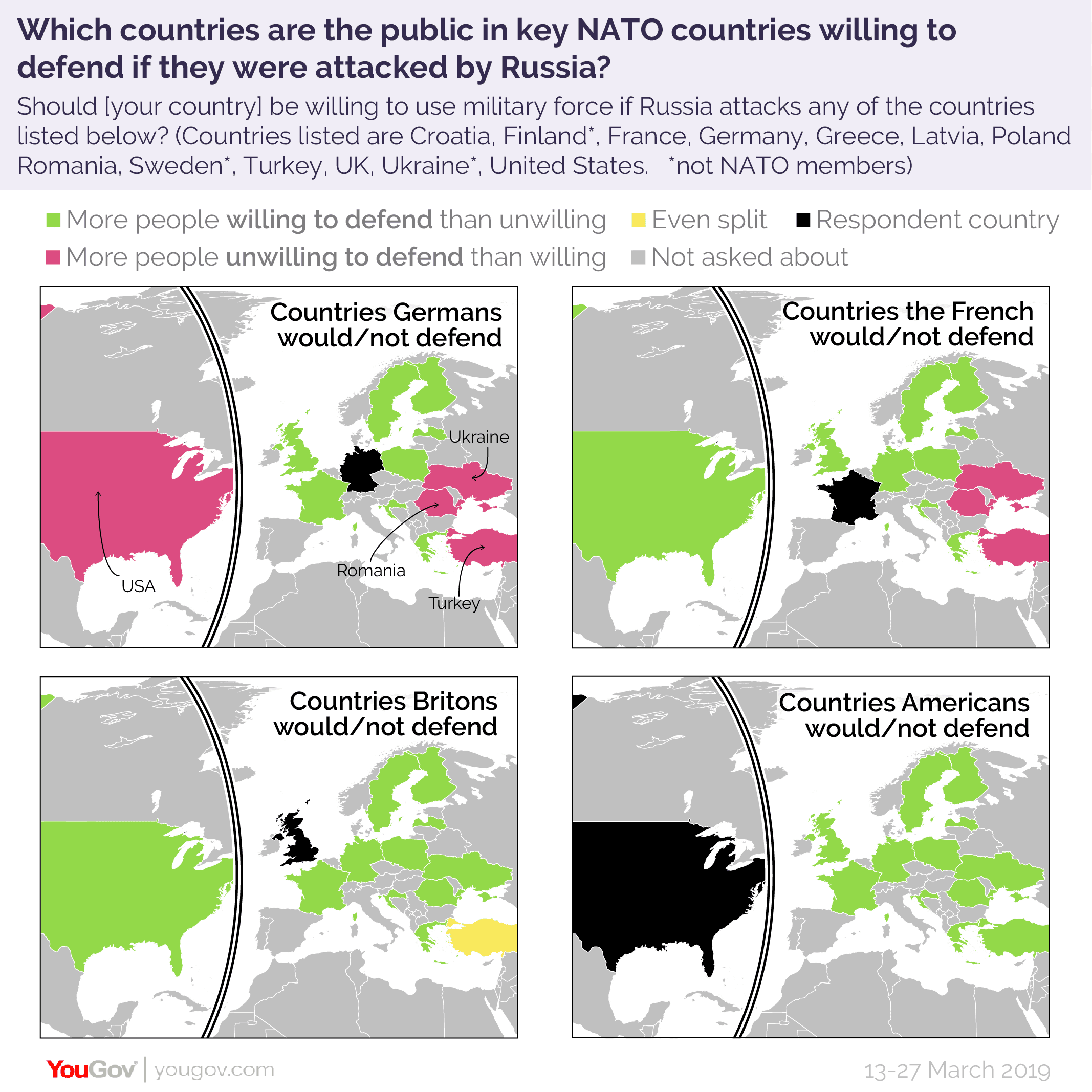 Germany has come under fire from U.S. President Donald J. Trump for failing to live up to the defence spending commitment of two per cent of GDP, with Germany behind on its own below-guidelines goal of 1.5 per cent by 2024.

The country came in for renewed criticism from the Trump administration on Wednesday when Vice President Mike Pence told an Atlantic Council forum marking the 70th anniversary of NATO in Washington D.C., “Germany still refuses to make the necessary investment of 2 per cent of its [gross domestic product] GDP to our common defence.”

“Still, too many others are falling short, and as we all acknowledge, Germany is chief among them,” Vice President Pence said, according to The Hill, and urged Germany to stop its work on the Russia-Europe pipeline. 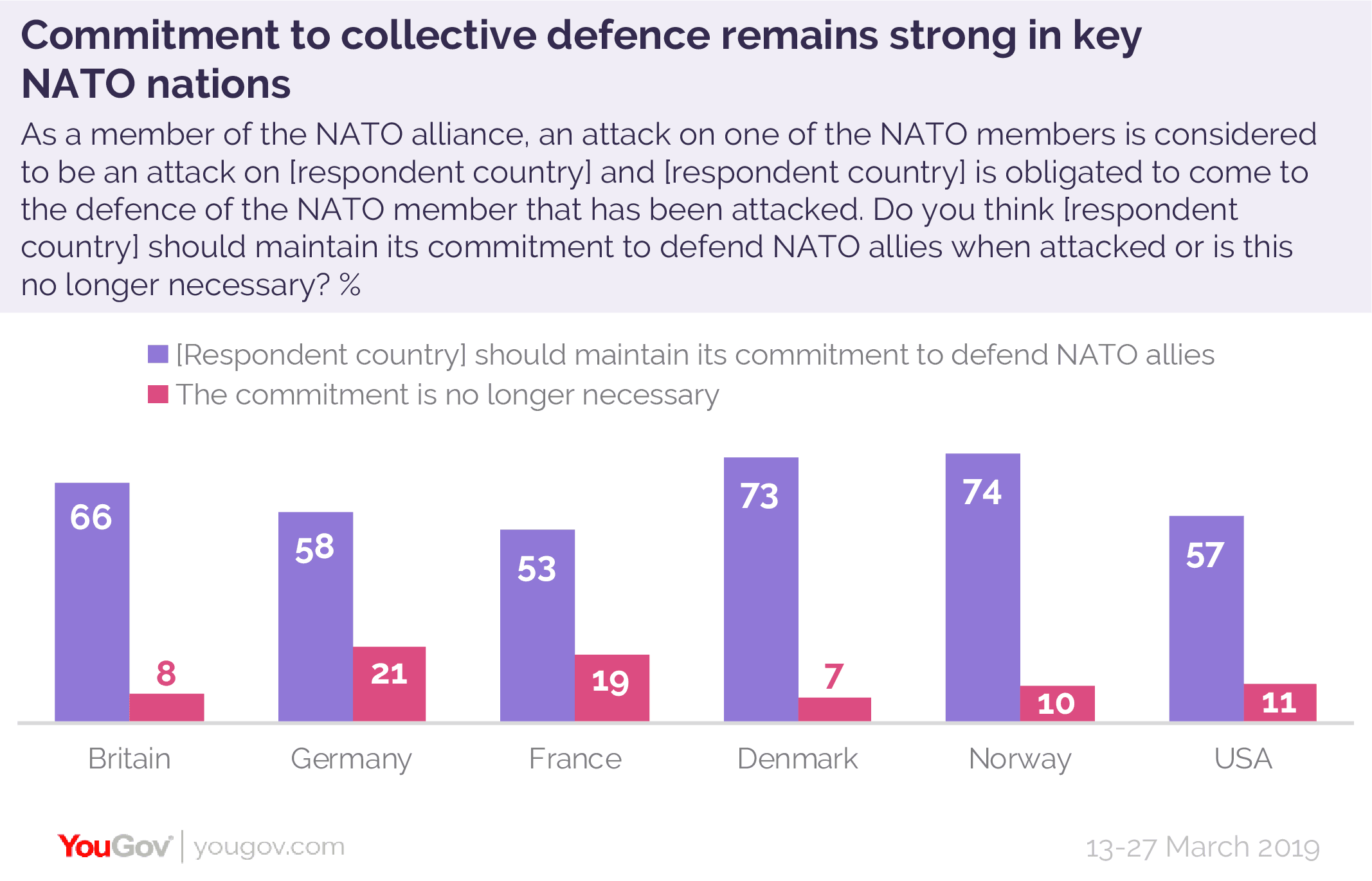 The survey also revealed that while support in NATO has dipped slightly in key European nations, the belief in defending NATO allies in general is still high, with Britons, Germans, French, Danes, and Norwegians remaining overwhelmingly committed to collective defence.

Just seven out of 29 NATO allies pay the minimum two per cent GDP spending target in 2018: the United Kingdom, Estonia, Greece, Latvia, Lithuania, Poland, and the United States, with the last picking up the largest share, spending 3.39 per cent, according to German broadcaster Deutsche Welle.

However, that number has increased from five two years ago with defence spending across the bloc also on the rise. This week, NATO Secretary General Jens Stoltenberg gave credit to President Trump for encouraging allies to pay their fair share, saying, “NATO allies must spend more on defence. This has been the clear message from president Trump and this message is having a real impact.”

President Trump was not the only U.S. leader to criticise Europe for failing to live up to its collective defence commitments, with President John F. Kennedy telling a National Security Council Meeting on January 22nd, 1963, “…we cannot continue to pay for the military protection of Europe while the NATO states are not paying their fair share and living off the ‘fat of the land.’”