The chaplain to the Parisian fire brigade has been hailed as a hero after it was revealed he led efforts to save the priceless holy relics and art stored inside Notre-Dame Cathedral.

The story of Father Jean-Marc Fournier was reported by Christian journalist of French Catholic Television station KTOTV, who revealed the chaplain went into the burning cathedral to retrieve relics and art before they could be damaged by fire and falling debris. Reports state the priest formed a human chain to carry the items away from danger.

Following up that report, the Katholiek Nieuwsblad states Fr Fournier has a history of Christian mission under dangerous circumstances. The newspaper reports he responded with the fire brigade to the 2015 Bataclan terror attacks in Paris, where Islamist extremists killed 90 with rifles and suicide vests at a rock concert in the city, where he was “quickly on the scene after the attack… he helped remove the wounded from the hall and prayed with the bodies of the victims.”

The priest also served as a chaplain to the French army and survived an ambush in Afghanistan where ten French soldiers were killed.

Television network Sky News reports the remarks of one member of the Paris emergency services who said of the chaplain: “Father Fournier is an absolute hero.

“He showed no fear at all as he made straight for the relics inside the cathedral, and made sure they were saved. He deals with life and death every day, and shows no fear.”

Among the relics saved in the effort was Notre-Dame’s most famous and revered and holy relic, the gold-encrusted Crown of Thorns, believed to be the wreath of thorns that was placed on the head of Jesus Christ at his crucifixion. That the relic was saved flashed around the world on Monday evening, but news of further items saved emerged Tuesday morning.

Many of the objects removed from the Cathedral were bundled up in packaging and placed in Paris’s city hall. 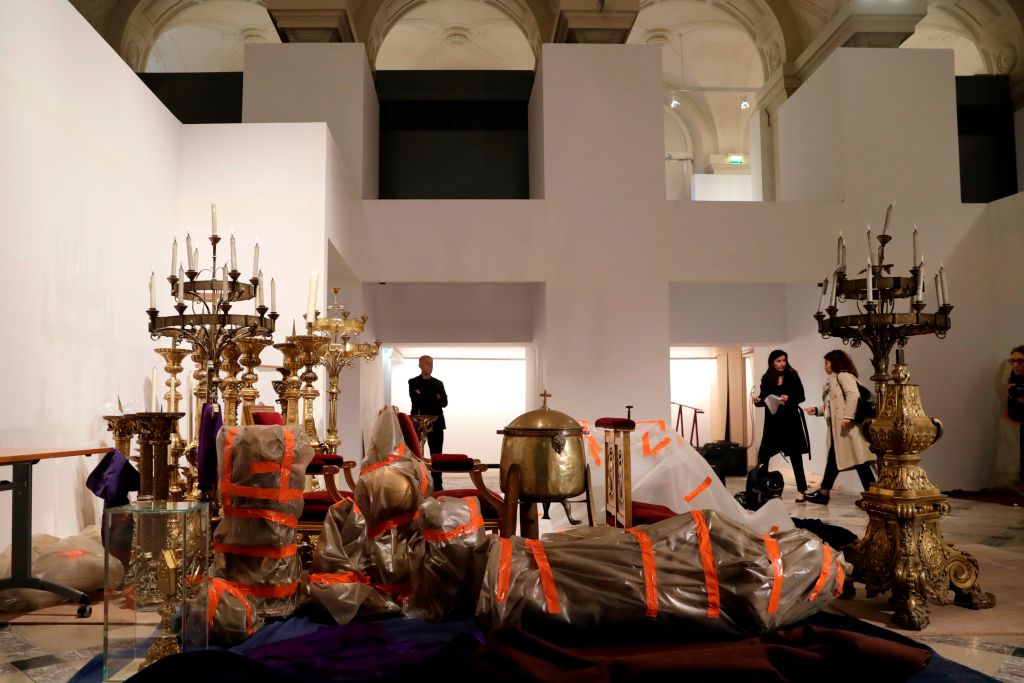 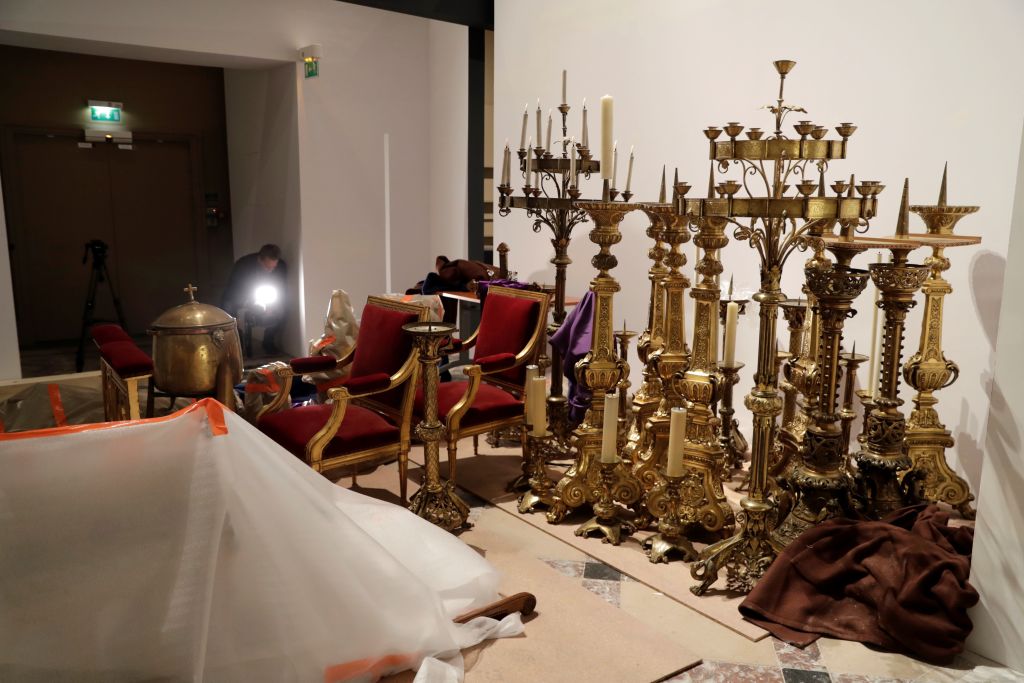 Other works of art associated with Notre-Dame had already been removed from the Cathedral before the fire even started. The 16 copper statues of the apostles and evangelists that adorned the roof of Notre-Dame made headlines last week as they were removed by crane for restoration work, intended to go two at a time over the course of the coming years. They now stand on palettes in a warehouse, having been saved from the fire which the restoration work, ironically, seems to have started. 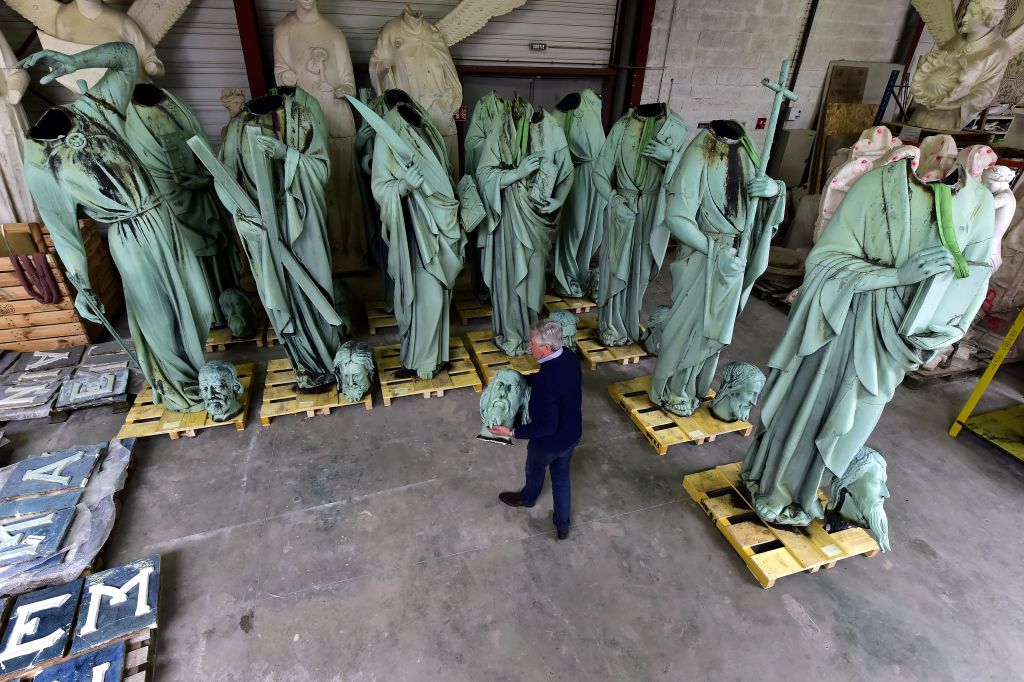 Patrick Palem, expert of the heritage restoration, walks by the statues which sat around the spire of the Notre-Dame cathedral in Paris and removed for restoration, stored in SOCRA workshop in Marsac-sur-Isle near Bordeaux, on April 16, 2019.Photo credit should read GEORGES GOBET/AFP/Getty Images 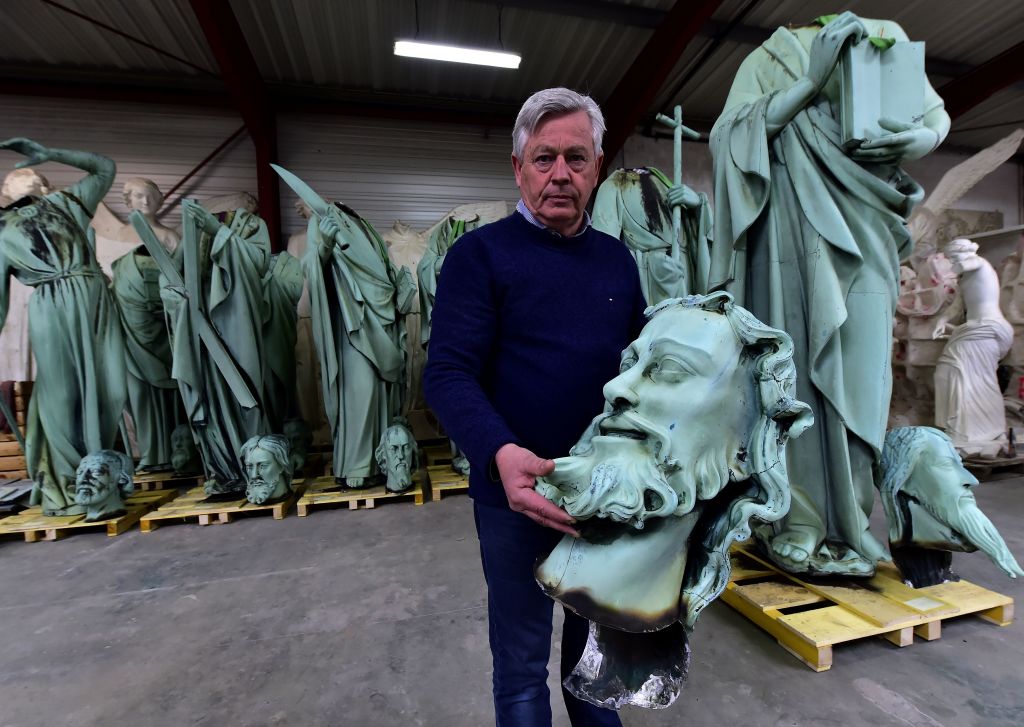 Patrick Palem, expert of the heritage restoration, shows the head of a one of the statues which sat around the spire of the Notre-Dame cathedral in Paris, stored in SOCRA workshop in Marsac-sur-Isle near Bordeaux, on April 16, 2019 before restoration. GEORGES GOBET/AFP/Getty Images

These pictures, taken over the past month show the process of disassembling and flying out the statues by crane from the roof, before the fire. The cathedral has long been in need of serious renovation work, but a lack of funds from the French government which owns Notre-Dame left the church asking for donations to fund the work. 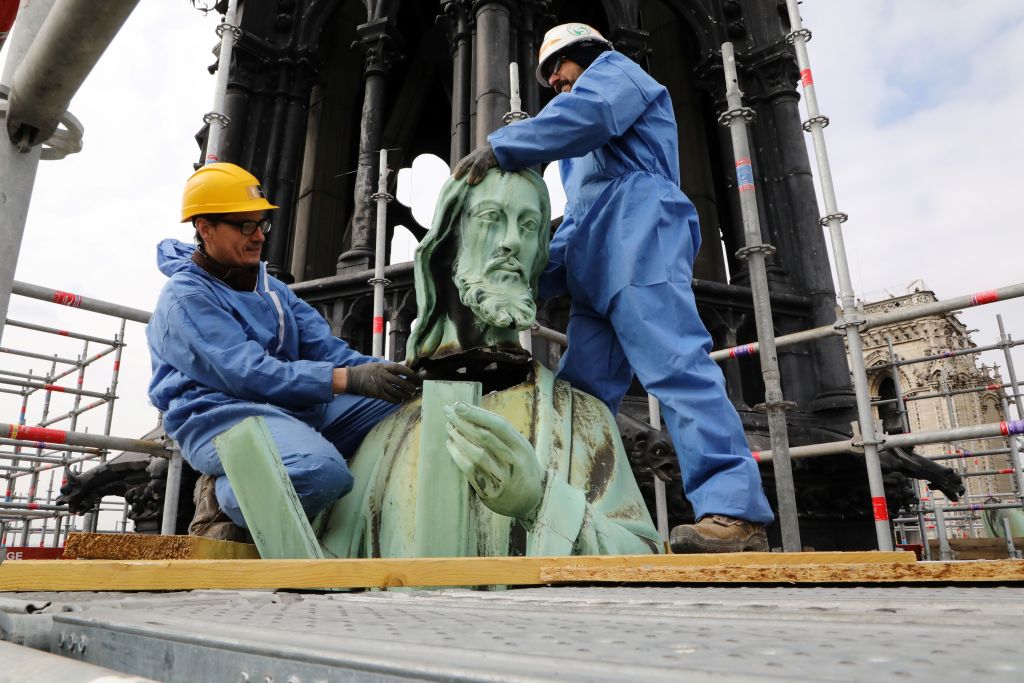 Workers of the Socra art conservation company remove the head of the statue of the apostle Saint Andre, built by architect Viollet-le-Duc, on the roof of the Notre-Dame Cathedral during restoration work on March 27, 2019, in Paris. (Photo by Ludovic MARIN / AFP) 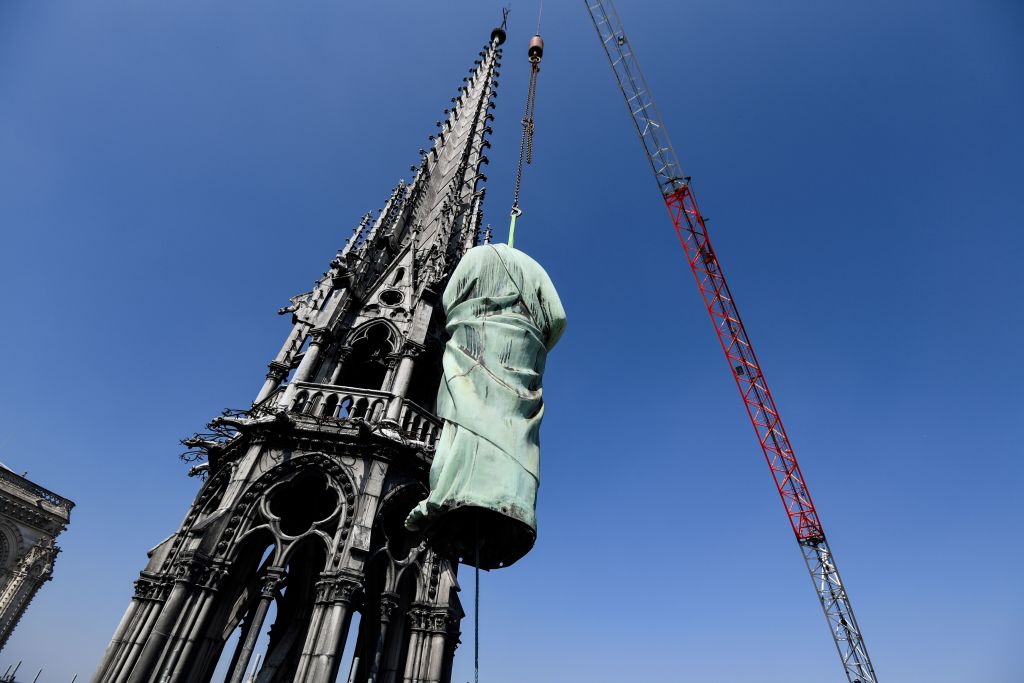 A crane lifts one of 16 copper statues, sitting 50 meters above the ground, off the Notre-Dame-de-Paris Cathedral to be taken for restoration on April 11, 2019 in the French capital Paris. – Using a 120 meter crane at the foot of the cathedral, the sixteen statues, the 12 apostles and the 4 evangelists, which sit around the spire of the cathedral are being removed to be sent to Perigueux, in southwest France for restoration. The absence of the statues will also signal the start of the renovation work of the spire that will last until 2022. Only then will the statues, commissioned in the 1860s during the great restoration of the cathedral by Viollet-le-Duc, return to their original place. (Photo by BERTRAND GUAY / AFP)